Europe – Eastern to the Urals

Russian – European Section to the Urals – 638

This probably ought to be done as 4 segments, but you can see them against the present trend lines. The early rise with single digit thermometers, the stable middle, the pop up with a surge of thermometers, but flat trend inside that bolus of measurement (with the top peaks all about at the Hot Pink trend line) and finally that Hot Pink Pop on thermometer change in 1990 but with a nearly flat trend line I liked having this one with a single trend line fit to those earlier “segments” as a counter example to the other segmented graphs. Showing how a rising “fit” comes out of stepped segments. You can see it in that long middle segment from about 1810 to 1939 where the “top peaks” run about at the pink trend line, but the blue trend line slowly climbs from the bottom of the blue curve to the top of the blue curve.

European Russian Sector (West of the Urals) Graph of Anomalies

Almost flat gently rising trend, but volatile, then the “Step Function” higher at the change “bullseye” of 1990 (as we’ve seen so often), but strangely with a dropping trend after the “Pop”. 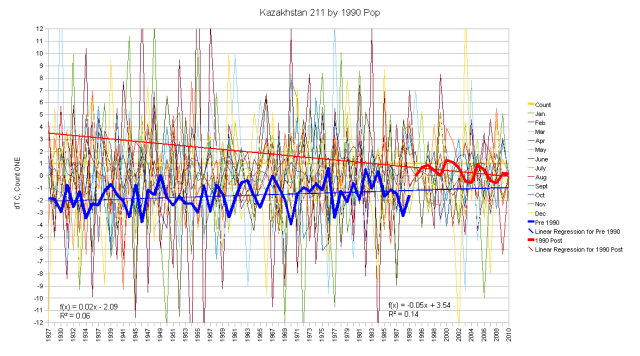 Dead Flat into that “bullseye” of thermometer change, then a step function higher. 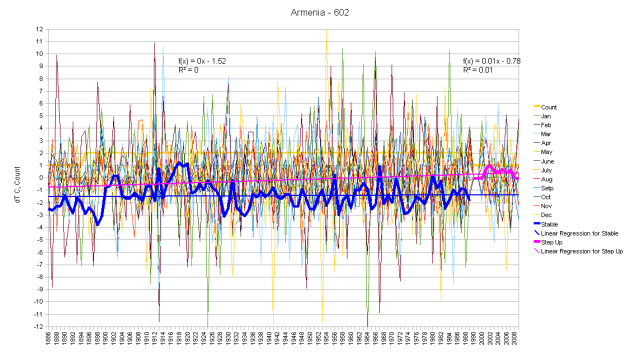 Substantially Dead Flat. Cut Off in 1994.

Cooling trend with some rocking and rolling. Then Cut Off in 1990.

Looks darned flat to me. Tries to “Pivot” from 1989, but then cools back to zero.

I don’t see any warming pattern here that would be consistent with the CO2 thesis. Mostly I just a bunch of thermometer change artifacts that make it through a very clean anomaly based process. It would be interesting to take the current data for the truncated countries and see if it matches the data in the GHCN record. A nice little “Dig Here!” that anyone could do.

It would also be interesting to pick a stable set of thermometers for European Russia and see if the “warming trend” evaporates. They Russians have already said they see no warming trend when they look at their data and have said they think the GHCN data set has selection bias in it. Without that Russian trend and the clear “Step Functions”, we’ve got nothing going on in Eastern Europe.

A technical managerial sort interested in things from Stonehenge to computer science. My present "hot buttons' are the mythology of Climate Change and ancient metrology; but things change...
View all posts by E.M.Smith →
This entry was posted in dT/dt and tagged GHCN, GIStemp, Global Warming. Bookmark the permalink.

1 Response to Europe – Eastern to the Urals