Some with both Atlantic and Mediterranean coasts. Some perhaps suited to the Central Europe group, but small enough and near enough to water to be strongly water moderated; but not so cold as the North Atlantic group. That transition from cold North or volatile East to warmer and more moderated places.

Fascinating. Here we get an added thermometer just in time to make a nice “little dipper” in the baseline period. Then it leaves right at the end, with a rise as the result. A 1980 “splice” jumps us up a ways, and then a 1990 Pivot to a great heating run. Guess a group of islands off shore, being responsible for a 1200 km or so radius of surrounding surface deserves the full treatment. About 1.5 C to 2 C “warmer” than before. Wonder if there are any sea surface records or a history from the Azores or Canary Islands that might be compared… Ah, yes, in Africa, The Canary Islands. Need to check back here after I’ve got Africa done.

For now, though, we’ll just have to wonder why the middle of the Atlantic has a hockey rink while Gibraltar does not…

Portugal is running along dead flat at about -1 C right up until the 1961 start of the UEA / CRU baseline, then it gets more thermometers (about 20 of them) and a cold plunge. (Strange how in the USA that happens in 1951 while in Europe it happens in 1961… purely a statistical quirk, I’m sure /sarcoff> ) In about 1981 we yank them out again (and maybe yank out the non-warming or colder ones?) and get a nice “bump” up. Then the 1990 to date period gets a lot of persistent pot stirring of thermometer change. The Pivot looks to flatten the trend some (probably as we’ve now got a nice cold baseline built in… don’t want to be outrageously out of touch with reality…)

I love the way the “low going spikes of hair” just plunge in the baseline period, and get completely clipped off just after it. 2 C of “clip” in one thermometer swap. That 1990 change is interesting too. A big spike up of “hair”, then a downward “neutralize” spike, followed by a tuning period where the “up hair” ends up just about 1/3 C more than the down hair and with all risk of random volatility squashed out of it. Nothing more than +2 C up or -1.5 C down. Wonderfully played. Wouldn’t want those -3 C spikes of the late 1990’s messing up such a beauty of a “Little Dipper”…

Ah, Spain fascinates me. Long slow drop into cooling. Even the 1980’s thermometer cuts can’t fix it. Barely a pause. Flattened, but not rising. Somebody better do something! So we have a big “double bullseye” in the 1991 to 1995 range with a spectacular jump up accompanied by a LOT of thermometer change. We take ’em out, we put others in, we take some more out, stick some others in. “Where did I leave those damn jet airport records?” you can almost hear someone swearing. And in the end, we are ‘back to zero” were we were in 1857 and 1901. But “not to worry” as the baseline is nice and cool in comparison. I think this one may qualify for “The Big Dipper”. It certainly took a lot of work…

Who cares about Gibraltar? I’m sure someone thought there was no need to tune it up, as it will simply be homogenized in to everything else. So we have an interesting “rolling” aspect (ocean oscillations?) and in general we start and end at about zero. No global warming in Gibraltar, though there is the cloying hint of a general drift lower with a halfhearted neutralizing splice at 1990. There is also a ‘bullseye’ splice at about 1952, though with little impact.

France, having a “Hide the Decline” moment. Nice long steady downward trend, but just too big to truncate. So, a little rearranging and “Presto!” no more decline!

Nearly dead flat, then a Hockey Stick blade glued onto the end. Nice, very nice. Who knew Belgium was so big in hockey?

So here we are, “cheek by jowl” with Belgium. Not a hint of warming. No hockey stick. A trend line that rises about 3/4 C in 300 years, but with significantly warmer excursions in the past. Zero crossing all the way. I love the Dutch (and not just because some of my ancestors came from that part of the world (via England). But because they can be cussedly persistent about being honest with themselves about the reality that confronts them. If you would keep the ocean away, you can not afford to fudge your numbers…

This graph REALLY needs to be looked at in full size, so click on it to see the “trend” up close and personal.

Yeah, not exactly “coastal” but near France and needs to go somewhere, so why not here?

A short record that starts and ends at zero, but with a bit of a dip in the baseline middle as thermometers come and go. Again with the curious match to the 1961-1990 UEA CRU baseline rather than the 1951-1980 GISS baseline we see in the Americas data. Surely just an accident… (Though I do wonder if they haggle over Asia and Africa? A reprise of global colony politics? Must be fun to hear them discussing changes to the baseline…) 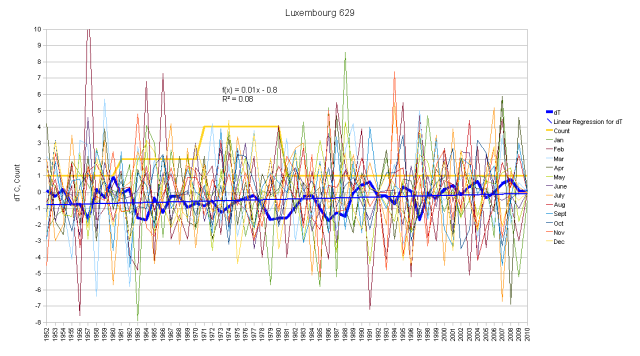 Other than continued admiration for the Dutch and wondering why the French have let themselves be “sticked” in the end; my major observation is that if you gave me this basket of trends and graphs and said “Average them and tell me what it means” I would say “Averaging them would mean nothing, they are all different.”

Furthermore, I’d be really curious why thermometer counts jump all over at the entry and exit from the baseline intervals (and with “coincident” changes of anomaly trends…)

And finally, I’d ask “How can Spain, France, even Portugal have long duration cooling trends, that suddenly spike up, if most of the ‘CO2 effect’ was already present in the air long before then?” And why does it happen right when you get a change of “Duplicate Number” attesting to a changed process?

Postscript: It looks like Gibraltar deserves a Carbon-Guilt free visit (drive through France and Spain to get there, they can use the warmth ;-) and spend a bit of time at a nice cafe…

And, given their stalwart stand against tides and storms, both natural, and undoubtedly some political “heat” over their record: everyone planning a visit to Europe simply MUST visit Holland. All time spent there is completely Carbon-Guilt Free. Heck, they even have windmills…

5 Responses to Europe – Atlantic and Coastal