The Southern Nations of Africa

This posting completes the Africa series of Postings (and will be followed by an “aggregator posting” listing the continents). Please note that I’ve added a “dT/dt” category on the right hand side of the blog. I’m going to keep the dT/dt charts separate from the GIStemp and GHCN particular issues. This will make all of them easier to search.

OK, So the southern end of Africa. We would expect it to have much similarity over that tip of the continent. The land mass is relatively thin (as compared to the north) and most of it has coastal exposure. It is in some ways dominated by just 4 countries. Angola, Namibia, South Africa, Mozambique. The rest are smaller and in an inland cluster. So we will approach them in that same way. Starting in Angola, working down and around the Horn of Africa, and then up the other side, ending with the inland smaller countries.

Well. Astoundingly flat. Not even a dip in the baseline. No wonder it gets ‘cut off’ in the early ’80s.

Well. Astoundingly flat. Wait… didn’t I just say that? No wonder that part of the globe shows up as missing on the GISS maps. 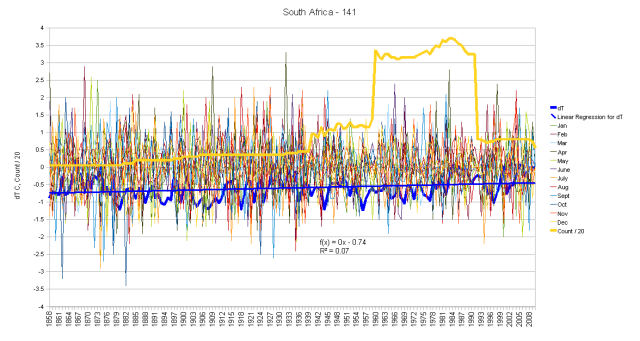 Another incredibly flat “trend” though this time we do get about 1/2 C of rise out of the 1990 event (even with a tiny bulls eye) as a sort of step function, but no ongoing trend.

Entirely captured inside South Africa, so put here for comparison. 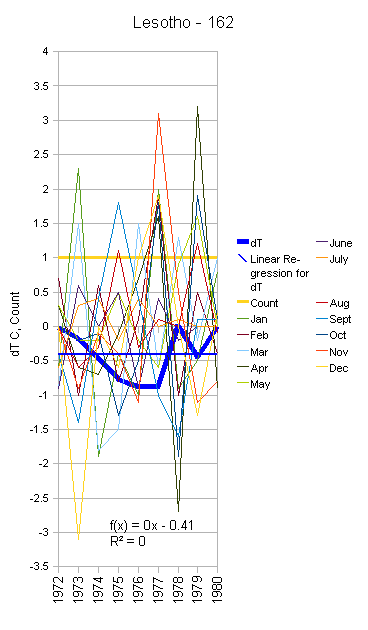 Too short to do much with, but flat for what it’s worth.

Well, I guess we know where all the ‘warming’ down near Madagascar can be found for “fill in” to those surrounding places which have a truncated or “holey” record. But man, what work it took to get it! Huge data drop outs, almost no cold going anomalies. All that just to stop a gentle decline and get all of what, 1/2 C out of it? Sheesh.

Needless to say, some clean recent data from Mozambique would be very interesting… If that weak “hockey blade” gets shown to be bogus, well, …

OK, a ‘flat roller’. It’s going nowhere, but bobbing up an down while it does it.

How about by segments? 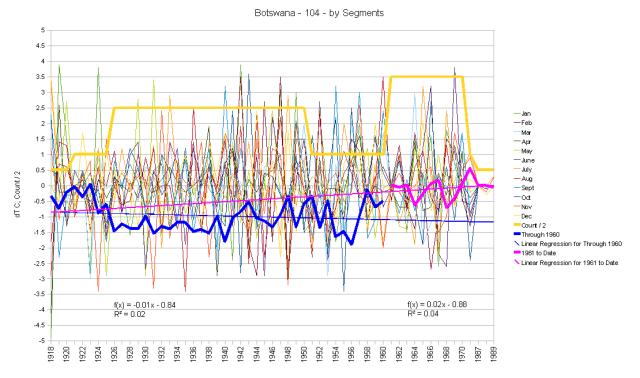 Where we have a nicely dropping trend turned into a “dip” at the thermometer count change up; then bookend it with a “lift” and later let GIStemp finish it out with “fill in”, “homogenizing”, and eventually even “The Reference Station Method” used on Grid / Box scale to make that Grid/Box anomaly from up to 1200 km away.

Golly. Dropping like a stone up to the 1981 “lift” and then the 1991 “bulls eye” Pivot. Manages to turn it around nicely. Heck, we could even use some of this to “fill in” Zimbabwe… and maybe even Botswana…

A beauty of a dip in the 1951 – 1980 baseline too! Just because it’s no warmer than it was back in the 1920’s, no reason we can’t call this 1.5 C of “Global Warming” and “share the wealth” with all the adjoining countries that are just not going with the program. Heck, being nicely central in location, it can be used to warm just about every country in Southern Africa. What a nice convenient accident… please just ignore how much the thermometer count line has to jiggle around.

Well, a rising early trend gives an upward tilt to the trend line for the early segment (though it is substantially flat for most of it’s history in the middle). Then…

What Happens! We’ve got a dropping trend line. Don’t even have a “dip” in the baseline and the 1990 Pivot gets us nothing (though in fairness it is encumbered by a load of dropped data in the late ’80s early ’90s) . I’m sure it’s just accidental that it cuts off in 2007 just after digging out of that -0.5 C hole it was in.

Having made over 150 various graphs in a couple of weeks, I never want to hear someone say I don’t do enough graphs ever again! ;-)

Southern Africa is not warming. Parts of it are cooling.

A few “well placed” buggered records can contribute a lot of “warming” to surrounding areas that are not “warming”, especially if the surrounding countries have their cooling or flat trends dropped.

Averaging a bunch of things together hides more than it reveals.

Given the “cooling” and “not warming” we found in other southern areas there is a very real potential for a global hemispheric oscillator to have been putting all the “cool” at the south end of the planet and all the “warm” at the north end for a few decades. Now that various ocean currents have ‘flipped’ it will be interesting to see if the 2010 ‘recompute’ of GHCN suddenly starts finding a lot of stations added in the south end of the globe. It would also be very interesting to find out if the satellite data produces maps of the hemispheres that could be used to “compare and contrast” and see if anything interesting is happening in the south vs the north. It’s certainly the case that an oscillator could easily have existed without showing up in the GHCN data set given how sparse the southern hemisphere coverage has been.

We really don’t know what our temperature history has been for most of the southern 1/3 of the globe. And we don’t really know what it is now. We have a few small spots with records, and those of dubious quality, that account for all the “global warming” in that 1/3 of the planet. That gets spread around to mask the fact that most of the nearby areas are flat of falling (or were before they were dropped on the floor…). Not exactly good evidence of any global warming pattern.

And then there is all that ice being added to Antarctica… but that’s another topic for another posting… For now, here is the “Antarctica” graph. But realize that it’s a splice nightmare with loads of divergent records being sucked into one graph.

Notice that the “tops” of the dT line (hot pink line) are fairly consistent at about the -1 C line right up to the 1990 Pivot. Notice too that the dT/yr (yearly anomaly average) just dies in volatility. That red line goes from a dramatic 3 C wiggler to nearly zero. That’s just wrong. At a minimum it says “nothing changes” in Antarctica. Hard to believe.

(It is counter cyclical with dT as dT is a running total of it, so it lags the moves in dT/yr)

It’s only the bottoms that rise. We’re not getting warmer in Antarctica, we’re just compressing the volatility of our measurements and converging on the long term stable top end. A look at the “monthly anomalies” shows that. Astounding compression of range. A lot of things that would have been considered “normal” in the past look like they are not making it to the record today. Some of that will be an artifact of more stations (the extreme of an average will not move as far as an individual station could move) and some may be the way our stations are now placed, compared to the past. But it’s a very strange trend in any case.

Either Antarctica is incredibly stable and our prior records are complete trash, or we have absolutely no idea what’s really going on as the record is cooked too much. Both ends of that chart can not be true and accurate.