As a recent “issue” has broken out about Eureka Canada having bogus data in some recent records I’ve decided to make a set of graphs for the data. Temperatures directly. Monthly anomalies with the yearly running total. And finally, the running total of monthly anomalies.

The “anomaly” graphs are made from early 2010 data while the temperature series was from late December 2009. (Simply because those are the sets I was working on in each development process so that’s what’s set up to run). In any case, one or two months of data at the end of the series will not be significant. For the ‘anomaly’ graphs, I’ve used the “Blended Duplicate Number” data to give the most accurate anomalies possible.

As usual, you can click on a graph to get a larger version.

Some months rising, some falling. Notable is how the recent end for some months rises above the trend line. That is an indication of recent higher temps (and potentially flags those months and years with a high risk of dodgy data.)

Generally it looks like summer is flat. The months with the most ‘rise’ are late fall and early winter. I’m also intrigued by the data dropout in 1996 (that results in the annual average taking a dive). 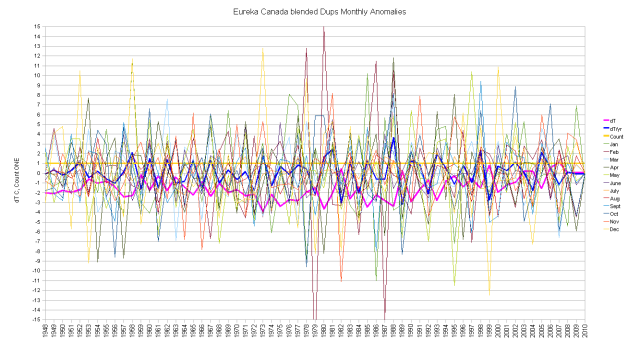 Not as much to see as I would have liked. Some oddities in the middle of the ‘baseline’ interval of 1951-1980 with some odd spikes and dropouts. The biggest thing I see is that the ‘baseline’ time period was oddly cold and volatile. Recent data have the typical compressed volatility. The bulk of the ‘rise’ of the dT line comes after the 1990 changes of process, prior to that it’s a flat series with some volatility. All I see in this graph is some crappy data artifacts and some recent warming via process changes.

March and May falling. April with a gentle rise. January and February nearly flat, but with some rise. June and July rising about 1 C, but August dead flat. Then comes September. We start ‘warming’. October, November, and December too. For December it’s a bit over 3 C of “warming”.

So what happens in Sept to Dec? Oh yeah. Winter comes and folks are not acclimated yet. Wonder what the fuel burn profile is for Eureka… perhaps highest at the onset of winter?

That would also be the time folks were more likely to drop an “M” for minus from the temperature report. After the core of winter, they would be more likely to remember to do it (having done nothing else for months…)

A technical managerial sort interested in things from Stonehenge to computer science. My present "hot buttons' are the mythology of Climate Change and ancient metrology; but things change...
View all posts by E.M.Smith →
This entry was posted in AGW Science and Background, Favorites and tagged GHCN, Global Warming. Bookmark the permalink.