Earlier we saw a revised version of the dT/dt code that ‘blended duplicate numbers’ more smoothly. The examples in that post were more Southern Hemisphere focused (largely because I’m fascinated with the southern hemisphere…)

In this posting, I’ll be giving some sample northern hemisphere graphs.

Strange how February and March are falling, while February, April, and July are flat. ( I hope I got those right, the colors are a bit hard to read some times.)

It is the winter months that really climb. November, December, January. Though, oddly, so does June… Wonder if ‘sun on tarmac’ is greater in June?…

That magenta ‘all months’ line has a dead flat trend, though I do note the ‘hockey stick’ ending it gets after the 1990 processing changes. About equal numbers of months falling as rising or flat.

Here we have September, October, and November rising, but we now have December, January, and February falling. July and Aug too from the looks of it.

What to make of this mix of conflicting directions? I’d make of it that it’s a bad idea to splice a semi-random set of thermometers together while changing the instruments and the processing. But then, I’ve thought that all along.

Oh what a MESS! Yeah, Canada is getting “hotter” than other places. But it’s all due to just a couple of months. Look at November, January and February and how they rocket up, then tell me how December, while rising, rises far less? Just screams “instrument and processing problems” to me. Then toss in that September and October are falling while August rises …

March, April and May are on a tear upwards too, but June and July are basically flat. Then from 1990 on the volatility is basically dead while the volatility to the downside is simply missing entirely.

Those major dips look a bit like evidence for a 60 year cycle, in which case we are at a top about to head down. My guess is that it’s a thermometer selection artifact. Looking at individual station temperatures would clear that up fairly quickly. ( In fact, for all the “trends” in these aggregate charts, a look at actual reliable station temperatures would rapidly say if they are real trends in real stations or ‘splice and dice’ artifacts… “Dig Here!” ) 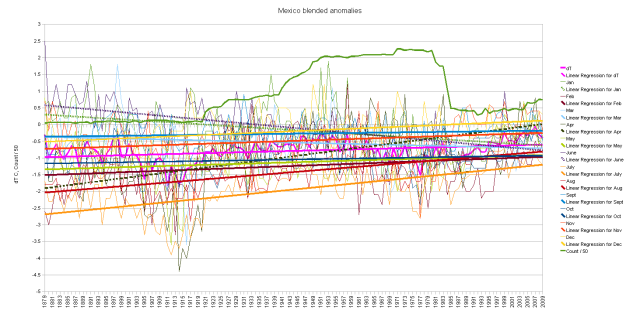 January, March and June falling, April, July and August rising? So when is the major vacation travel to Mexican airports? Is there a spike for the April spring break and a drop in June at graduation?

We still have the strongly down trending aggregate anomaly line (magenta) that gets “Hockey Sticked” in the end… That’s encouraging (as it shows no major impact from the change to blending the Duplicate Numbers together rather than highlighting the change of Duplicate Number with a reset). We can have some faith that results are consistent, even while the monthly trends are made more clear.

The most striking thing to me is that December / February crossing set. Decembers dropping like a rock, while February rises strongly. January falling slightly while November slightly rises. Frankly, it looks to me like the December data are somewhat wrong, but that the rest of the data has been fudged some too. Or perhaps French airports are just not very busy at Christmas and lots of folks in France take a small vacation to the Islands in February while the tourists head to France for an ‘after the holidays’ getaway ?? … (Hey, it’s a more interesting “story” than the AGW one or than the “bad temperature data” most likely conclusion…

Again of note is the ‘clipping’ of cold going anomalies after 1990. We are now a full 3 C above the W.W.II era. The tops, however, are very much the same recently. (Though I must call attention to the “thinning of the tops” in the baseline interval. Just look broadly at “how much ink” is in the monthly data in that space between 1980 and 1990. Notice the “center of mass” drops from about -1 C to about -2 C, then pops back up right after the end of the Baseline, making the “Hockey Blade”. This, to me, speaks strongly of biasing the baseline interval to the cold side.

This is another case where looking at individual station data from good long lived stations would tell us if France in fact had a cold dip and a big rise; or if they were just being “sticked” in the end and having their baseline sagged… This, IMHO, is a really BIG DIG HERE! It ought to be fairly easy to pick a half dozen well qualified French stations and validate the basic real trends. They would need to either match this aggregate or we would know that the GHCN data set was “cooked”.

Another confirmation that the aggregates don’t change much in interpretation with this smoother monthly data process. Germany still has a generally dead flat aggregate trend line (magenta) with the present “rise” about the same as past rises. December is falling here, too (So maybe there is something to the colder Decembers in continental Europe? Or at least the processing is consistent.)

But January is rising and April is plunging… Is it REALLY getting to be ‘horridly cold’ for “Springtime in Germany”?

Once again we see the “thinning of the highs” in the baseline and the clipping of the lows just after. This just looks so… so… ‘manicured”…

December still plunging, but now January on fire! Is springtime coming to Poland in January? Look at that February, March, April warming! Then it goes flat for the summer. OK, no added warmth, but a less cold springtime. Just don’t try to keep warm in December… So does that match what folks on the ground in Poland have observed over the last 50 years? Surely someone knows an “Old Pole” they can ask. 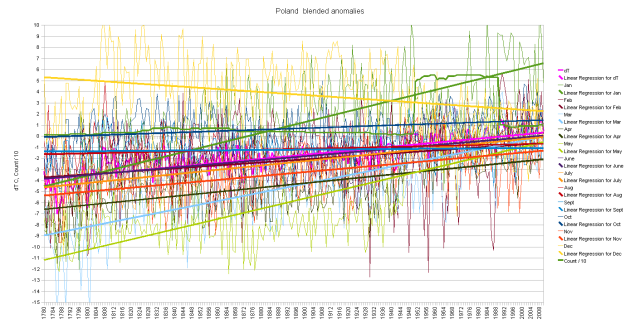 But if it’s too cold in Poland in December, they can always go to Siberia to warm up. Look at that December rise! November rising nicely too. Just be gone by February when it’s getting even colder than it was in the harsh Siberian Winters of the early 1800s and that spot of trouble the Germany Army ran into in W.W.II. Colder than that has to be mightly cold…

July and October dropping. Many months simply flat. Then some winter months warming. Especially February. Is there something spicial about February in China?

That February has a deep “sag” in the baseline period used by GISS and CRU and pops up just after 1990 is, er, um, “very interesting”. That November does the same, in an overall flat trend, is fascinating…

Tis a puzzlement. I have no idea what to make of Japan. We have a modestly rising annual trend line (magenta), but with August and November falling. Then there are about 4 flat months (though of them, March is drifting downward)

Perhaps that Japanese penchant for order, symmetry and structure has gone just a bit too far?

That could explain a lot…

13 Responses to dMT/dm – A Northern View