Missions – San Miguel (and other bits) 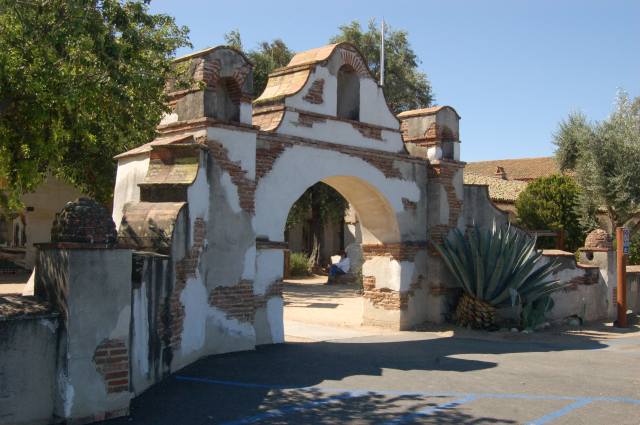 Each mission has it’s own character. Each one tells you something just a little different from the last. In this mission, named for Saint Michael, the Arc-angel, as am I… we found a working mission. It is still in use as a novitiate. On interesting thing was the degree to which humor can be found here. 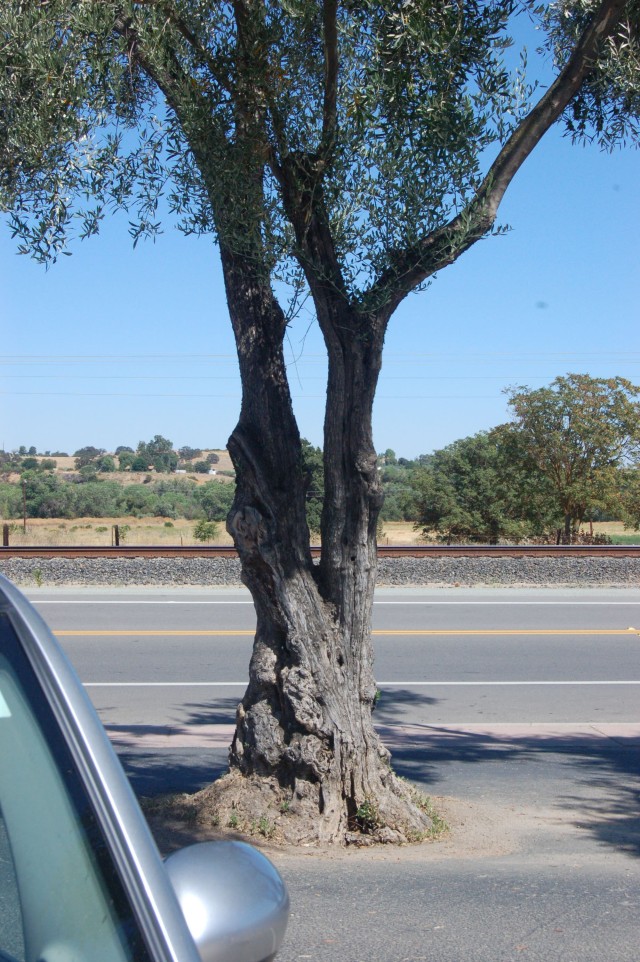 The observer will note that this picture shows the parking area (see car parts) along with what was the old highway that runs just in front of the mission. In the background is the railroad line. Smack in the middle is a very old olive tree. It gets priority rights… even if it does look a bit battered near bumper height.

And the Padres have some humor about it.

The Interior is Spectacular

The walls are covered in art and some of the best preserved interiors from that era.

At the far end of this walkway the photographer is doing a photo shoot for a quince anos.

From The Front and Side Bells 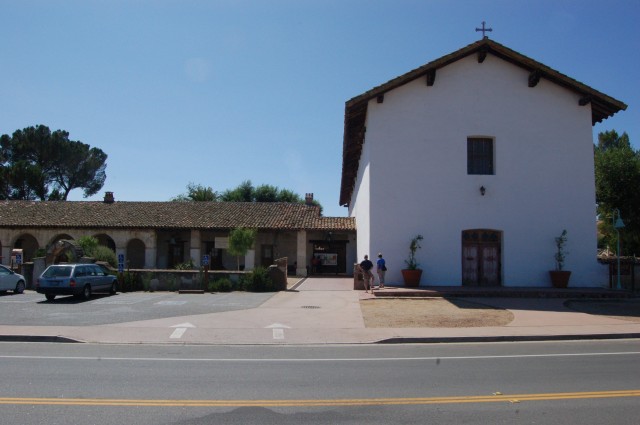 Mission San Miguel Outside Front from accross the highway

And I love what they did with some old rocks. A good example of ‘never running out’ of resources. We never run out of rocks and mud.

In the middle of this rock wall is a narrow stairway for the bell ringer to climb to ring the bells.

San Miquel Courtyard and Mary Under A Tree

Other Bits Interest Me

I admit it. I’m interested in the technology of the era. I also like to take pictures of interesting ‘textures’. Yes, I have photos of tarmac, walls and floors, leaves up close. Lots of textures. So this picture of an exterior “stove” caught my eye. Both for the simple construction with fine function, but also for the textures of the pavers and the surfaces. The use of iron bars lets you lay on a solid griddle, a wire grill, or just lay kebab skewers over the heat.

Simple, cheap, available materials. Yet with a sturdy elegance about it.

“out back” is the more modern equivalent, where meals can be cooked for large groups. They have a bunch of tables and chairs too. 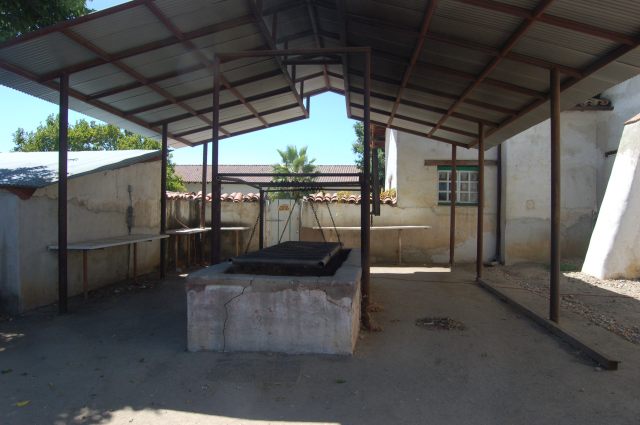 The inside kitchen is interesting too. All made of mud and clay, with just a few bits of wood and a couple of iron items to round out the ‘kit’. I could easily be comfortable cooking for dozens of folks here. 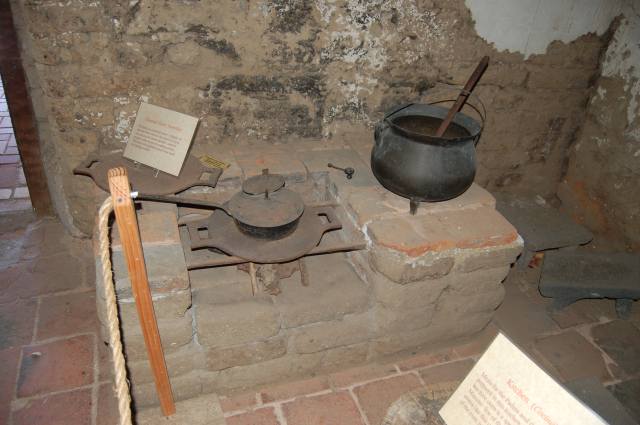 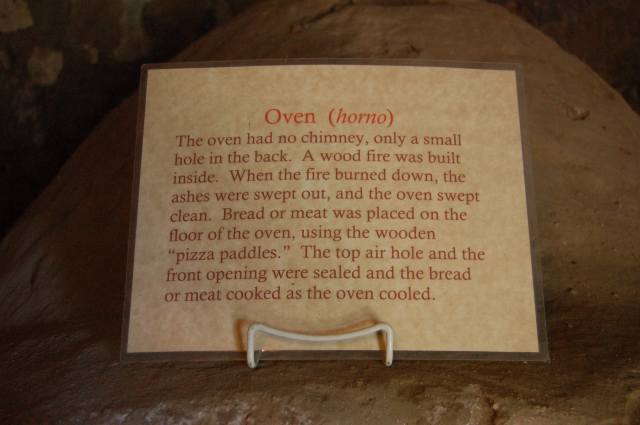 Just across the room from the stove. 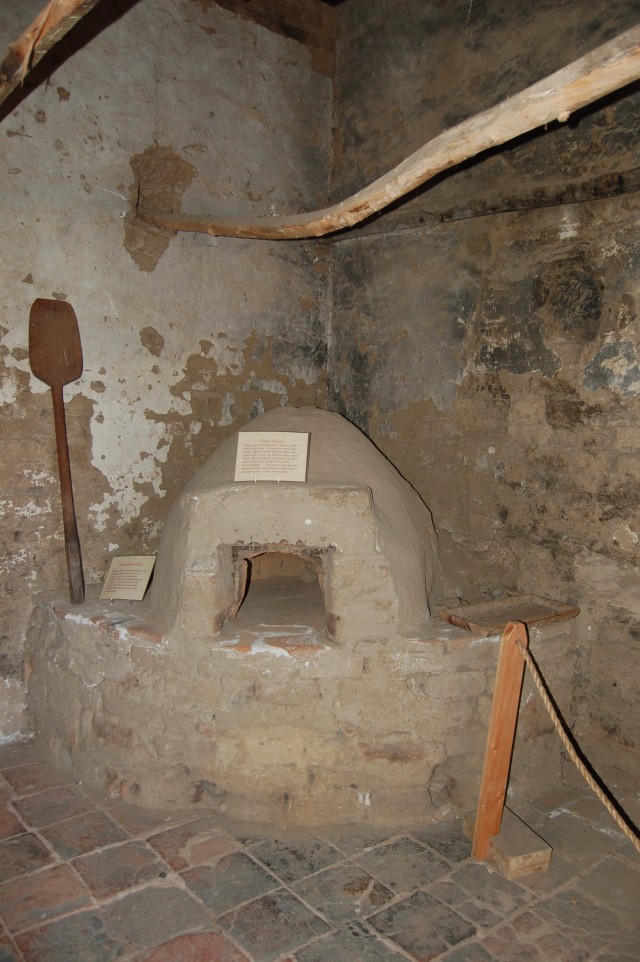 Notice the wood beams overhead. They are used for smoking meat and fish over the oven when the fire is warming it. So you can prepare some smoked salmon and jerky while the oven is warming up, then bake bread and venison while the dried / smoked foods are cooled and stored. Not a bad life.

While on the subject of food, when traveling from Mission San Antonio de Padua to Mission San Miguel, we went through the dinky town of Lockwood. We were hungry, and decided to ‘not be picky’ and just eat at the roadside ‘whatever’. From the outside, it looked like the typical ‘burned burger and dry fries’ stop: 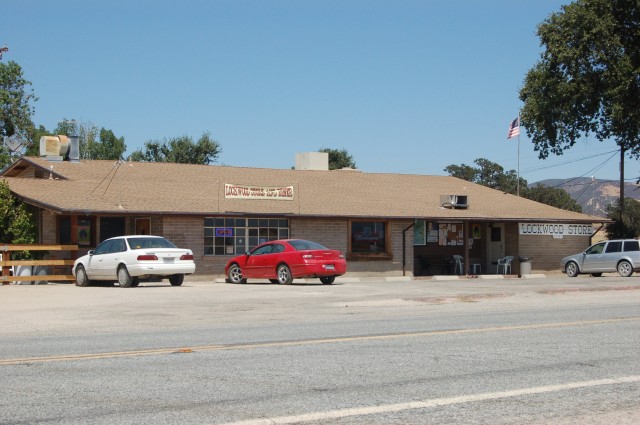 The prices looked a tiny bit high, but OK, we’re in the middle of nothing for as far as we can see, so what the heck. In all other directions you see nothing but open ground. Across the street is an ‘outhouse’ sized shack for a person to read the scales of a truck scale on the roadside, and not much else. The Post Office is about a block (empty) away and is the size of a large living room. Yeah, not much ‘there there’.

Boy were we surprised, and pleasantly so. The cook (who looked like a large tattooed biker) was in fact a very pleasant fellow. Our waitress was polite, personable, and ‘a little bit country’. I think she went on the back of the bike… cute, petite, and charming.

I ordered a ‘pulled pork sandwich’ that was just great. I asked for a little extra sauce (as the very large filling was falling out into the basket as I ate, and I needed a fork and some sauce to do justice to it all). Just bun, pork, and some cabbage with sauce. Yet it was wonderful. My wife ordered a ‘grilled ahi salad’. We expected some kind of tuna patty and lettuce. What she got was a perfectly done pan seared fillet of Ahi. Grilled so that the inside was still like sushi, but the outside was flavored of the grill; then sliced into ‘fingers’ and laid over a bed of mixed greens.

Just perfectly done. Something you would expect at a high end Brew Pub (and I’ve had worse and paid more for it at such places…). I asked for the cook to give them the complement and that’s when I discovered that these were really nice folks. They have only been open a couple of months, but I’m pretty sure they will succeed.

The place had a half dozen stools at the counter, NASCAR on the wide screen TV, a half dozen scattered tables for 4 or 6 each, and a variety of beer and wine. (I had the house Merlot and it was also quite good. The waitress didn’t know who made it and said the ‘wine guy’ was out right then. But the Wine Guy knows his stuff. I suspect a local vineyard of the California Central Coast. Not your typical ‘jug red’ at all.

So from the “you can’t judge a cook by his tats” department, if you do the missions tour, this is a very pleasant watering hole and diner along the way. Cost was about $26 for two including tax and wine. Well worth it.

We then drove to the coast and returned home on Highway One via Carmel. I’ll cover Carmel in another posting, but here are a couple of pictures of the coast. Imagine you have been at the mission for weeks in the sweltering inland heat (up to 110 F in the shade) and have spent all day on the back of a donkey traversing brown dry ground, stopping under the occasional oak tree. Then you begin to feel cool ocean air and a faint scent of salt mist… 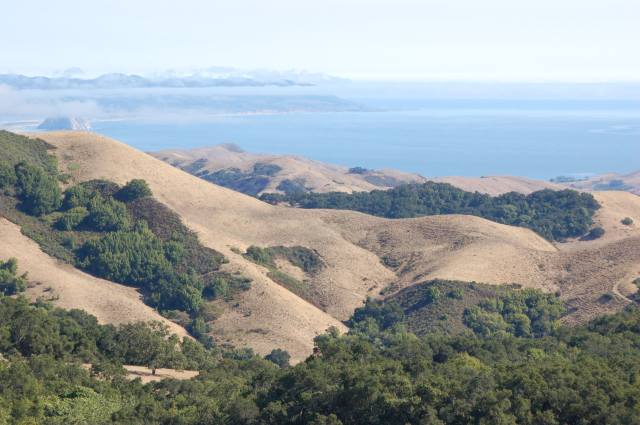 As you approach the coast of California

And reach the shore. Where you can remember the wooden ships that brought you from half a world away. 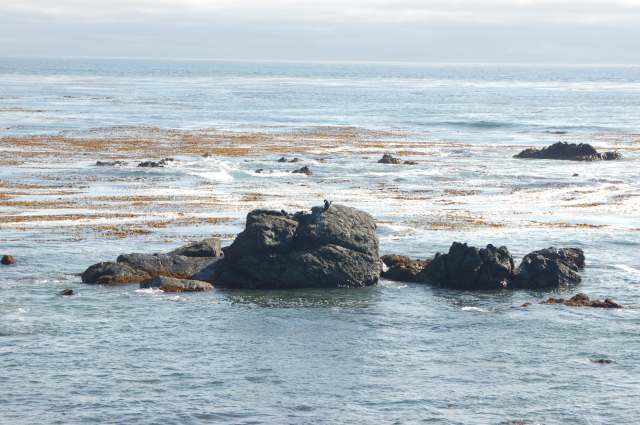 Eventually returning to the Regional Capital at Monterey and to the headquarters mission at Carmel. Finishing with a fine dinner with the Governor and perhaps a ship Captain, bringing news of home. Local abalone, muscles, and rock fish, perhaps oysters and a leg of lamb. Roast ears of corn, a bit foreign then, and squash with American beans (also both a bit new to the Spanish). And finished with some talk by the fireplace with some mission grape wine or a dash of Porto from the Old Country…

I still wonder how Spain could have let it all go. Had they kept Mexico and the rest of their colonies they would be the world dominating superpower of today. But in the moment of this story, they were one of those superpowers. And this was their outpost on the edge of the world. 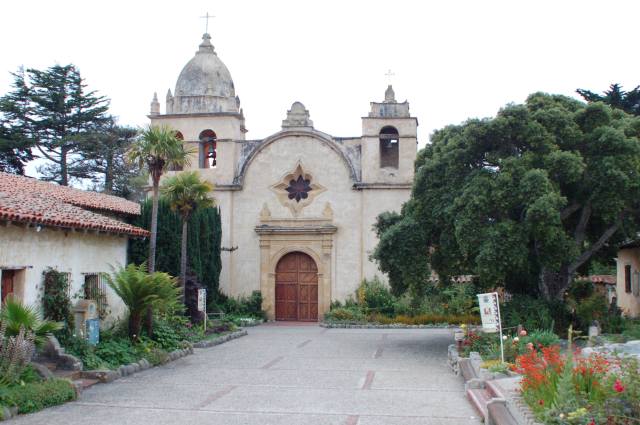 I love the pastel effects in that one. No Photoshop involved.

Then there is that odd contrast we get with dry land grasses down to a rocky shore, then the odd bit of beach …

A technical managerial sort interested in things from Stonehenge to computer science. My present "hot buttons' are the mythology of Climate Change and ancient metrology; but things change...
View all posts by E.M.Smith →
This entry was posted in Human Interest and tagged Missions. Bookmark the permalink.

19 Responses to Missions – San Miguel (and other bits)