In Praise of Little Tux

In my back yard there is a bunny colony. It began as a couple of pet bunnies that I let have individual ‘runs’, and after watching their behaviour change with the free time, I could not bear to put them back in hutches. That was 3 or 4 generations ago.

Along the way, I’ve learned many things about bunnies that you never learn from a pet kept in the house or a hutch. One is just how brave they are. Another is how much the are like us.

The ‘founder’ of this line was “Cupcake” a mini-Rex. Named before we knew he was a boy bunny. His spouse was Panda (a black and white pattern “Dutch”) and their daughter was Java. With her mothers pattern but her fathers colors.

Girl bunnies have a slimmer face than boy bunnies. Subtile, but you can see it. So this picture of Java shows her slim elegant face, and further down the black and white boy bunny has a broader stronger nose and face.

In their first litter there were also three boy bunnies. Magellan (named such as he would explore the entire world available to him. As a baby just able to walk, he explored the entire couch and end tables while his litter mates were content with a lap. Aragorn (who you saw “helping” me plant), Jack (‘the pirate’ as he had a snaggle tooth), and Toffee (named for his color, in the miniRex brown). 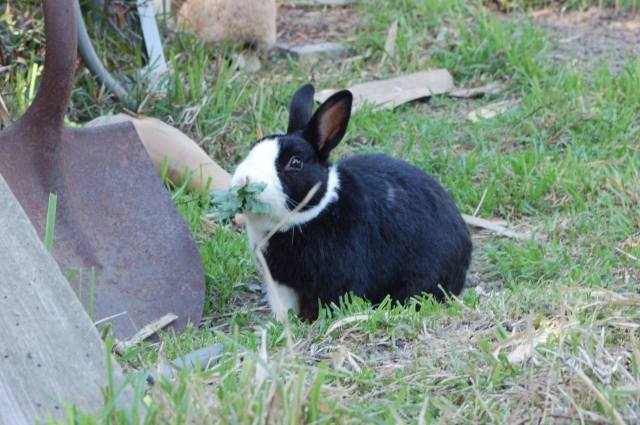 Planting? You mean it's not a salad bar? Well at least I saved you some time...

Little Tux is the son of Jack, and looks like him (with the Panda black and white pattern). His mom was named “Mimi” for “screaming Mimi” as when first picked up to inspect, at about the size of an apple, upon being turned onto her back she opened her tiny little mouth and issued a blood curdling scream that I thought would get the cops called… then when I didn’t eat her, shut up and just looked at me. The sound was very much like a child screaming. I was never able to approach her again. And as a result, all the present tribe are much more cautious than prior generations.

So Little Tux has never known a cage. His spouse is a small brown and white name Ginger (as it was a reddish brown when she was younger). Both are very small bunnies. Perhaps a kilogram or about 2 pounds. When you cross divergent breeds, the result is a change of size. Bunnies are inconsistent in size after an outcrossing. In this case, I’ve selected for the smaller ones.

Partly by accident. Jack was the smallest of his litter, but also very agile. Originally named for “Jack Sparrow” he also developed some Jackie Chan. Originally the boys were on one side of a fence and the girls on the other. Jack figured out how to do a Jackie Chan style run at the corner and bounce off the wall to get over a 4 foot+ high fence. So “small but acrobatic” was ‘selected for’…

At any rate, that how we came to be where we are.

So for a while I’ve gotten to observe ‘free range bunnies’. And what I’ve observed has changed me forever.

They have a very complex social behaviour, a deep understanding of the lives around them, and a profound bravery. Among other things. And they speak.

I’ve got a basic skill at speaking “Bunnish”. A gentle tooth chitter is “I’m happy and things are OK”. A small soft grunt is “I’m doing OK, how about you?” Unfortunately, a slightly tighter shorter higher pitched grunt is “Danger, Raptor, RUN!” as I learned once when my ‘accent’ was not quite right and the whole tribe scattered, a couple giving a quick glance skyward as they fled. The sounds are very quiet and somewhat rare, but present. I’m sure they think I’m shouting as I can’t be quite that quiet when I speak.

So I sit in a comfy chair under the awning and watch my bunnies and ponder these folks with their social lives and their language skills. And I see in them behaviours that we think of as the best of human behaviour.

Little Tux ‘takes point’. He is first out to test the safety of the yard. Realize that there are several free range cats in the neighborhood (including ours) and on more than one occasion I’ve had to usher one of them from the bunny yard. They are at least twice his mass. So from his perspective, he is going out to beat the bushes to see if he can wake up a tiger…

(I’ll try to get a picture of Little Tux on guard, but it’s hard to do as he takes his duty seriously and any approach puts him into action.)

When something does happen (such as me starting to move) while Ginger herds the kids to cover, Little Tux runs TOWARD the “issue”; then makes a turn to run across the line of sight away from the kids. Be it cat, me, or the occasional raptor that comes to sit on the fence and inspect the yard (a dive attack foiled by the overhead ‘clutter’ I have in place… bamboo garden poles and a tree, along with the wire garden square fences). Who among us would run unarmed toward a raptor our size or a tiger?

Java, a girl bunny, awaiting a snack next to Bean Mountain

Take just a minute to think about that. For most of the day he sits on a slightly higher bit of more open ground, keeping watch. He is deliberately exposing himself, while the others are hidden or grazing the lawn patch. Doing his “duty” of being the target of any attack so that they will live. Charging The Tiger when needed. Just as I would do in such a village. And Ginger will do the same if for some reason Little Tux is not “in front”. She will act to distract as the kids run for cover (a ‘brush pile’ with conveniently placed plastic tubs as roofs placed at bunny height off the ground for rain proofed spots of cover, with odd pruned limbs leaned over that.)

It has taken over a year to gain the trust of Little Tux and Ginger. They will now take bean leaves from my hand, and on one occasion Ginger came up to me and ‘sniffed my toes’. I was sitting very still in my chair, having just given her some cabbage leaves. I felt that gentle tickle of bunny whiskers on my feet as she “checked me out”, then laid down under my chair. Bunnies love bean leaves and cabbage. They are my ticket to friendship ;-)

So I have been carefully and completely evaluated by bunnies and found to be ‘a good fellow’, even if my ears are too short and my eyes face forward in the predator fashion… I could ask for no higher praise and can receive no happier reward. My only regret is that, as bunnies rarely live much past 4 years ( usually 1 or 2 max in the wild), I have to start all over earning that trust again with the next generation, and all too soon.

A technical managerial sort interested in things from Stonehenge to computer science. My present "hot buttons' are the mythology of Climate Change and ancient metrology; but things change...
View all posts by E.M.Smith →
This entry was posted in Human Interest. Bookmark the permalink.

20 Responses to In Praise of Little Tux