After a mere decade or two of trying….

Top is a dry Scarlett Runner Bean pod, bottom is a set of three normal sized common beans (2 purple pod, one Cherokee Trail Of Tears). The ruler shows that in between are some 19 cm long ( about 8 inch) Giant Purple Pod beans. The story follows:

In a Back Yard not to far away…

OK, it started out simple enough. Grow some beans to eat. Bought some Kentucky Wonder and had some Scarlet Runner beans for show and for the Humming Birds.

Some of the Kentucky Wonder beans were a bit, er, large. So I planted them the next year.

One of the KW vines was especially rampant and made a very large bean. About 1/2 way from a regular KW to a Runner Bean. Could it be that these two different species could cross?

My beans are regularly visited by a bunch of pollinator species. 4 kinds of bee, a couple of different humming birds. The cross pollination delivery was there. But who knows.

And the mutant KW had a ‘bit of string’ in the pods, so SWIMBO would not eat them. Me, being more robust, will eat them happily. (Frankly, as long as it doesn’t make me sick, I’ll eat anything that doesn’t run away and some things that do…)

By rights, I ought to have chucked out the seeds as “rejects”. But they called to me.

HOWEVER: I have a special fondness of Purple Pod beans… Could I, with some work perhaps, get a “3 way” going and make a Giant Purple Pod bean? The only thing that makes my Scarlet Runner Beans anything less than a spectacular favorite (with those bright scarlet flowers) is that the pods are a deep green. Not purple.

So the plantings began. Yes, I could have ‘helped things along” with deliberate attempts at hand pollination. But that is not my way. (The Plant has to want to change ;-) So I planted pole type Purple Pod beans next to my 1/2 mutant Giant KW and near to my Scarlet Runners. And each year would look for ‘interesting plants and seeds’. I’ve now got quite a collection of odd things.

Some deeper brown seeded KW (with less string) from back crossing some regular KW into the Giant KW. Some much lighter, nearly white seeded Giant KW (and the seeds are more ‘squarish flat’ than cylindrical.) Some Purple Pods with lighter flatter fatter seeds. All very nice and all 1/2 way to where I was dreaming about…

Time to pull up the summer stuff and prepare for the fall / winter garden. One patch of “Darwin’s Garden” (C) had been crowded under a runaway sage bush (that the hummers and bees love in October…) with corn overhead and my Cabbage That Will Not Die on the north edge. I’d put the three beans in there together and had dismal growth (I was also selecting for ‘needs nothing of me’…) but some survived. Had about a dozen purple pod beans on one vine.

In taking down the bunny fence around the square, I saw 2 Very Large purple pods, hiding at the back edge, under the sage. You can see them in the picture up top. Not your typical Purple Pod (that is more like the small dark purple pods at the bottom of the picture). The middle dry pod is a Cherokee Trail Of Tears bean for comparison. It has the black seed. The regular Purple Pods have a dark brown seed. At the top is a Scarlet Runner pod that has dried off. Notice the large flat lavender speckled seed.

I think I’ve got it!

Only thing missing is a purple speckled seed…. Something to work on for the next 20 years….

So I’m going to be taking Very Good Care of these special seeds. I’ve got about a dozen, per bumps on the pod, but they need to finish drying, then do a small stint in the freezer (to assure no bean weevil eggs are on them… lost a batch of runner bean seeds to them one year…)

Next year I’ll be planting out about 1/3 of them (with 1/3 for the next cycle if this one fails and 1/3 in the deep freeze seed archives…).

I’ll also be planting out another troika of the three parent seeds that were in that batch in the hopes of another bit of luck.

FWIW, it may be that I must accept a white seed. All the “Giant” mutants / crosses have had a whiter seed than the parents. It’s quite possible that the giant size is on the same chromosome as the white seed coat. Getting a gene to jump chromosomes is not easy…. (It can happen. There are a variety of odd ways that the ends of chromosomes can move, or just flip over and get joined on backwards. So I won’t give up. But the practical fact is that it may take another hand for that step.)

But for now: I’ve got what I’ve been working to get for over a decade now. A Giant Purple Pod bean. For the next few generations, it’s just stabilize the cross, deepen the color, hope there isn’t too much ‘string’, and enjoy the show at the “Post Darwin” plot. When a plant has survived “Darwin’s Garden”, and especially if it has given me an improved version, it gets rewarded with a few generations of rampant pampered growth. And I get rewarded with a larger and more stabilized seed bank.

Ok, I’m a bit wound up about this. But I just can’t let this go by without a bit of perspective. This particular bean is my Giant Kentucky Wonder. It is growing from some fairly crappy soil (barely turned over once 3 years ago, no fertilizer at all and never worked before that one turn. Just sod before that for a few years) in a corner that’s shaded by the tree for half the day and the house for another part of the day, with sporadically irregular water. Oh, and I over crowded the planting of the 4 x 4 foot square with some green onions (perennial ones), a dozen other beans, a 3 year old avocado tree in the center, a Marigold in one corner, and some radishes.

So the beans finally got above the crowd on the wire cages, then I sent them up a string into the tree. (A fruitless pear). I’ve picked a bunch of beans already, but when preparing to clean it out, noticed some up high… There are some shriveled leaves, too, as I’d cut the vine a couple of days ago. How high?

The green thing on the ladder is a 1 foot ruler. I make it about 15 to 16 feet straight up, but the vines did not go anywhere near straight. 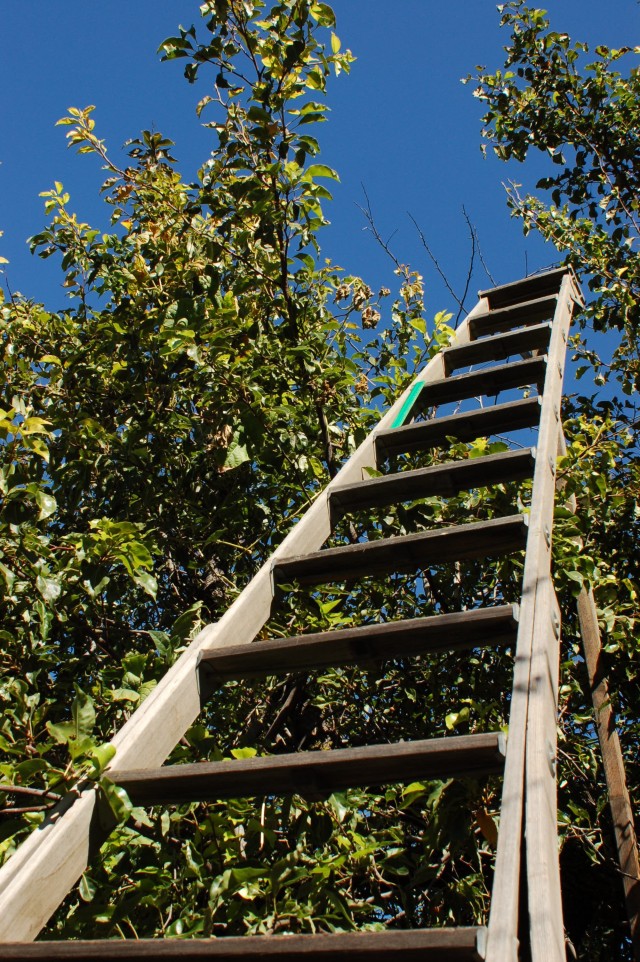 Above and slightly to the left of the green ruler are some shriveled bean leaves. There is a pod higher up, behind the tree limb: 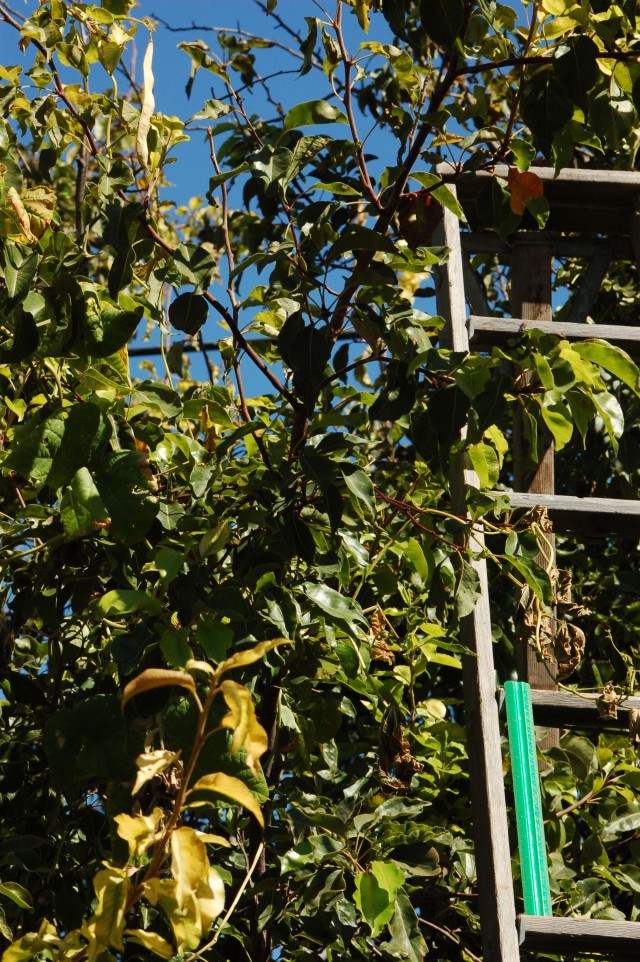 You can click on these pictures to get much much larger ones. The pod is the dry brown thing in the far upper left of the frame…

Those seeds are going to be planted out again next year, but in a bit of nicely prepared soil and with some decent water, fertilizer, and sun.

Anyone know where I can rent a helicopter come harvest time? I’ve run out of ladder…

While harvesting some of the Scarlet Runner Beans, I came across one pod that was a bit different. Smaller. Smoother. More “paper like” texture. Much more like the typical ‘green bean’ texture. The seeds inside had the typical Scarlet Runner black and magenta mottled color, but were a bit smaller.

The one in the tea spoon is a Scarlet Runner bean of large but normal proportions. A fully plump shelly stage bean is about 25%-50% larger than the one in the spoon. Makes eating things like Chili interesting in that it’s one bean per spoonful ;-) I’ve been known to use a knife and fork on individual beans so the sauce gets on the insides… And I don’t care if it looks funny ;-)

OK, so inspection of those ‘odd’ seeds shows them to be a bit smaller and thiner. The papery pod means a tender and non-fibrous green bean. So yes, I’m going to be saving this “sport” to see if I can make something out of the 3 beans I’ve got to work with.

The pod at the top is a interesting one. Nearly normal size (some were a bit longer). The texture was mostly like the “normal” ones (which have a rough kind of ‘wool tweed’ feel to the dry pods) but just somewhat softer, about 1/2 way to the smooth sport. Most of the seeds in it were normal sized, but a couple (one shown) were smaller. (Notice the bean space to the left of the bean shown is larger). As though 2 sizes of seeds were each contributing growth messengers to the pod.

I suspect that these seeds are crosses with the Kentucky Wonder that was growing right next to them. We’ll find out in a about a year. (IFF I remember to plant these guys out next year… sometimes I get wrapped up in something else and a new project gets to sit another year… or three… 8-{

But this is how a gardener or farmer can ‘develop’ a variety. While doing the day to day chores of a garden, keep your eyes open. Be aware of what’s different. Ask why? And don’t just pitch out the ones that are ‘not to type’ but ask if they might have a property you would like more. Less stringy pods for Runner Beans, or larger sized beans for Kentucky Wonders, or even a Giant Purple Pod.

Nature will provide the opportunities. But it’s up to you to see them.

A technical managerial sort interested in things from Stonehenge to computer science. My present "hot buttons' are the mythology of Climate Change and ancient metrology; but things change...
View all posts by E.M.Smith →
This entry was posted in Plants - Seeds - Gardening and tagged Beans, hybrid. Bookmark the permalink.