While making the run out here, I had the experience of hitting about a half dozen “speed cameras” in a row outside of Phoenix on I-10…

The good news is that my general driving rules prevented me from triggering them. The bad news is that they are there… Drivers rapidly become aware of the location and at that point, there was a rapid slow down of the traffic with the attendant crowding and risks… It is a great traffic jam generator as it starts a peristaltic slowdown wave into the rush.

The wiki said that the Phoenix cameras are set to trip at 11 mph over. Hope your speedometer is accurate…

This map comes from the rather nice site here:

And while it’s helpful, it is missing a few. There were more than are shown on the map out there on that stretch of road…

did a test of some of the GPS / database driven trap detectors on the market and did find some with many errors and others with fewer errors, but more latency. (Maybe Google can run it as part of Google Earth and up the quality ;-)

they did have a couple of interesting comments:

A 2007 study of speed cameras on the Arizona State Route 101 in Scottsdale found a 50% reduction in the total crash frequency, with injuries falling by 40% however rear-end collisions increased by 55%.

As of late 2008 cameras are being placed along all Phoenix area freeways capturing drivers doing speeds greater than 11 mph over the posted speed limit. Over 100 new cameras are expected to be up and running by 2009.

I’ve also seen a quote that the Automobile Association has declared all of Arizona a speed trap.

So, for future reference, it looks like the least camera ridden route, and the one with the least time spent buying California Gas (that ran about a half dollar more per gallon than anywhere else) is to head out on I-80. There are some “onsy twosy” cameras that don’t show on the map at this scale, so you will need to visit the site and zoom in for details in the middle of nowhere… 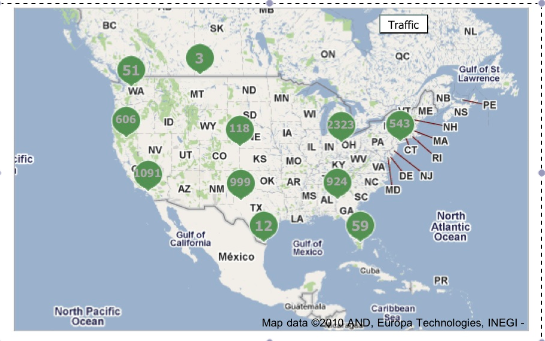 A technical managerial sort interested in things from Stonehenge to computer science. My present "hot buttons' are the mythology of Climate Change and ancient metrology; but things change...
View all posts by E.M.Smith →
This entry was posted in Favorites, Political Current Events and tagged driving, freeway, speed camera, ticket. Bookmark the permalink.