OK, the California wet and stormy with loads of mountain snow have been getting all the news. But earlier we talked about the historical record that showed cold in the USA West also meant a rise in lake levels and a general increase in wetness. (Contrary to other parts of the world where cold means dry due to decreased evaporation and lessened water capacity in cold dry air).

So for this storm series, is there any evidence that this type of action is happening?

Looks like Las Vegas is getting some rain. (Images from StormPredator software): 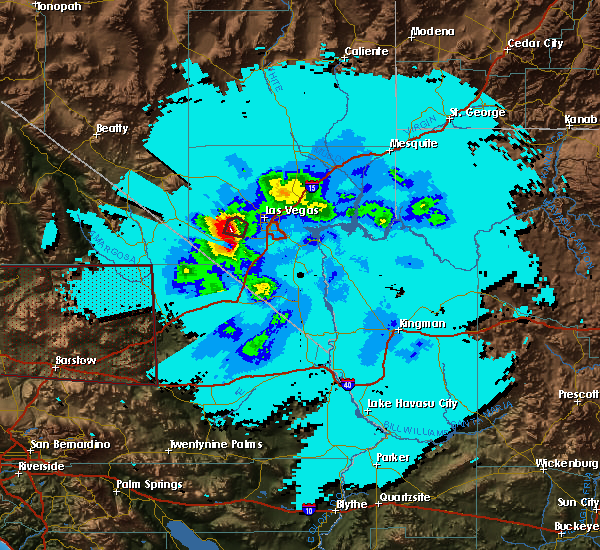 Red 5 inches, Yellow 1.5 inches, Green Lt to Drk 0.7, 1, 1.2 inches, Blue Lt to Drk Trace, 0.2, 0.5 inches. That grey sprawling spidery lake to the right (east) of Las Vegas is Lake Mead. If you look at the picture up top, you can see just how rocky the land is above the lake. Click on the picture for a larger image.

Realize that the mountains around Las Vegas are basically hard rock. It’s a dead dry desert in most parts. Some bits have some cactus, but this is not a place with a lot of ground cover to absorb runoff. Modest rains can flood Las Vegas.

Moving along the storm track toward Salt Lake City, this is the image from Cedar City, Utah. It’s just North of the Grand Canyon and in the drainage basin for Lake Mead. 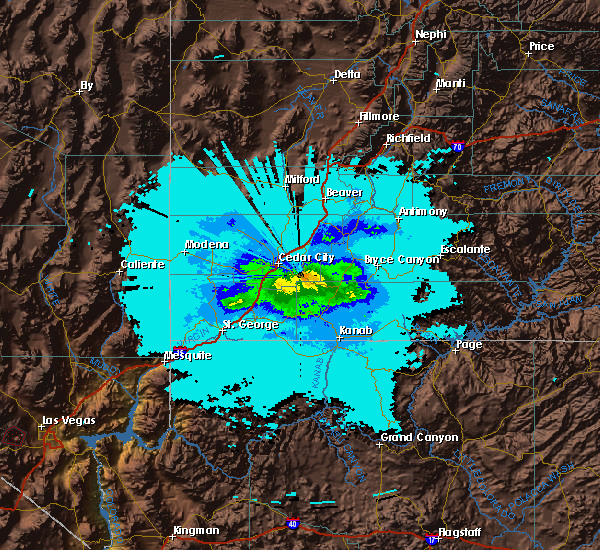 So raining already, but not as hard as Las Vegas at the moment. In Salt Lake City, the storm does not show significant rain yet ( It looks like the clouds have just gotten there). This image is “Base Reflectivity” and shows the clouds rolling in. What Los Angeles has now will follow a track through Las Vegas to Salt Lake City.

What’s happening in Los Angeles? Rain. In this image, light green is 1 inch. Orange is 4 inches, and Red from Lt to Drk is 5 inch, 6 inch, 8 inches of rain.

And just a reminder: Obstacles can block the radar view (so you get a ‘cut off line’ if a metal building or mountain is in the way) and radar fades with distance. That means you see more rain up close where at the fringes you miss some as reflectivity drops off.

While the mountains from the Sierra Nevada to the central Rockies will steal the show with snow this week, flooding problems over the interior West will increase.

The same series of storms bringing the snow are also bringing heavy rain.

Well, that sure does sound like it. “Flooding problems over the interior West”. So we’re in that pattern. Wet in the West means global cooling, and we’ve got a very wet west…

Away from the problems in California, enough rain (and melting snow) to cause flooding problems will stretch from southern Nevada and northwestern Arizona to central Utah and the valley of western Colorado the next few days.

Part of this area may easily receive two- to three-months of rain in as many days, hence the concern of flooding. Additional rainfall of 2 to 4 inches may fall in this area.

To me that say’s is likely going to be a very good time to start watching those western lakes that were “Drying up due to Global Warming” and potentially call some folks on the carpet about that scare mongering.

Cities and towns that may experience flooding problems include Las Vegas, St. George, Utah, and Grand Junction, Colo. Concerns around Las Vegas would be of flash or urban in nature.

According to Meteorologist John Feerick, the Virgin River in southwestern Utah is already flood stage and more rain and runoff are coming.

Well, there’s your shopping list of places to watch. Pick an area, find some interesting lakes. Get the historical rainfall, inflow, lake level, whatever data; then start watching. Every foot of lake rise is that much more testimonial for a rapidly cooling Western USA. “Dig Here!” signs all over the place.

They then go on to talk about how this can be good for some places that have had the reservoirs run down in the last years (during the hot dry phase of the Western USA / PDO cycle).

This photos.com picture shows Lake Mead. The white areas surrounding the shoreline indicate where the lake level once was. The areas are white due to calcium deposits made visible by the shrinking water levels.

Recall that water levels in Lake Mead have been falling for decades due to long-term drought and increased tapping from city and agricultural interests.

Andrews added, “This storm alone will not fill all reservoirs to capacity, including Mead.”

So we’ve got our coincident indicator of “Warming”, the drought and lower lake levels in Lake Mead and others in the area. And we’ve got our “hum dinger” storm dumping months of rain in days. As this rainy year unfolds, we ought to see the drought ended, the minor lakes filling fast, and the major lakes begin a slow multiyear climb.

Easily monitored and easily tested hypothesis. Simple and direct cross check on the assertion that we’ve left a hot phase behind and entered a cooling / cold phase.

If anyone knows of an easy way to monitory some key lakes out there, this would be a good time to let it be known. Otherwise I’m going to be spending a lot of time in “Rediscovered Country”. ;-)

Has some interesting historical notes. Including that the lowest level in the lake was in 1965 following a drought in the late 1950s. It also includes a couple of interesting graphs of lake level.

and this ‘close up’ on recent times:

To my eye this looks like there’s a few year time lag on the change of lake level. Not surprising when you figure that the rains have to fall for a while to enter the ground and then after they stop it takes a while for the ground water flows to slow and stop. Might have to wait a couple of years before we see a lot of lake level rise…

A technical managerial sort interested in things from Stonehenge to computer science. My present "hot buttons' are the mythology of Climate Change and ancient metrology; but things change...
View all posts by E.M.Smith →
This entry was posted in AGW Science and Background and tagged Global Warming, Lakes, PDO, Rain, Utah. Bookmark the permalink.

10 Responses to Cooling and Wet Utah