In an article on WUWT, Anthony Watts had a couple of very nice water charts for the Western States and for the USA in total. I’ve put updated versions of those in this posting where we can see even more water has fallen.

I’ve not (yet) figured out how to link to live maps of the below data (it may not be possible as they are created on the fly from choices at the top page as near as I can tell) but here is the state of precipitation for the last 7 days as of now. You can click on them to get a larger version: 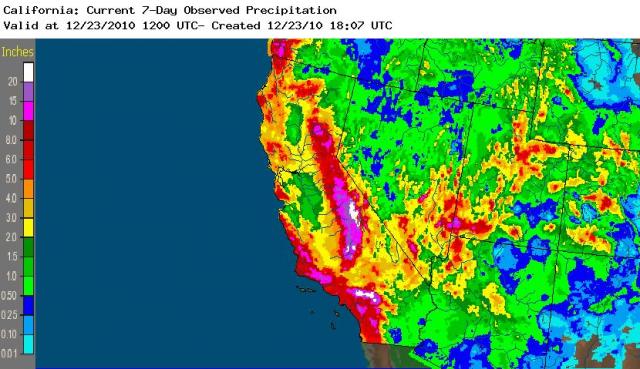 Note that ‘white spot’ on the California inches map is “20 inches and above”. Yeah, that’s a lot of water…

For the Metric Inclined, here is the same graph with “metric” selected. The white spot is 508 mm and above. Yeah, over 1/2 a meter of water. 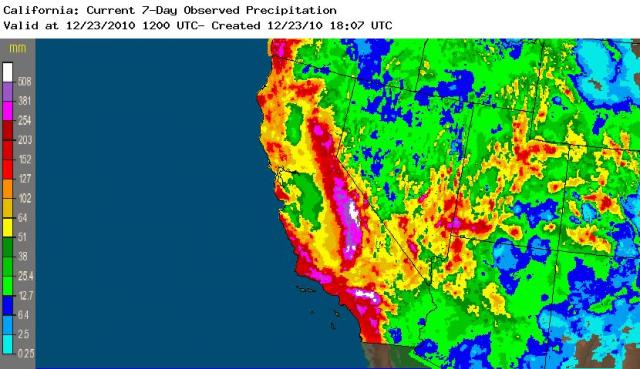 Percent of Normal for 7 Days

It’s been raining and snowing a lot.

You can make your own versions from the web site here:

There are links to ‘live charts’ of the individual state stream flow and water quantities in these prior postings:

With a load of live weather charts here:

Here is the chart of “percent of normal” for the year to date (that is almost over, one week to go). It shows that most of the country is either nearly normal or wetter than normal (with just a couple of ‘drought’ spots left).

I can only assume that now the “AGW Playbook” will be updated to say that drought is no longer an indicator of AGW, but instead flooding and increased rainfall are the hallmarks. But they’ve spent so much time propagandizing to the public that hot = drought that this might be a tough sell. Especially when a lot of that “precipitation” is falling as snow ;-)

A technical managerial sort interested in things from Stonehenge to computer science. My present "hot buttons' are the mythology of Climate Change and ancient metrology; but things change...
View all posts by E.M.Smith →
This entry was posted in AGW and Weather News Events and tagged precipitation, Rain, weather. Bookmark the permalink.