Where Is The Budget Problem?

OK, we’ve got a US Government that is trying to figure out why spending $1 Trillion you don’t have isn’t making them more wealthy, and they are arguing over whether cutting that by nearly nothing, or almost nothing, is the better “fix”.

Someone needs to give them a clue. So I guess it might as well be me.

First off, how serious is the increase of the deficit? How much “short” are we?

(All the revenue charts here are made from the web page at this site:

while the expenditures are from the web page at this site:

Their charts look about right to me, but if you want to dig into the details of how the charts are made, that’s where you go.) 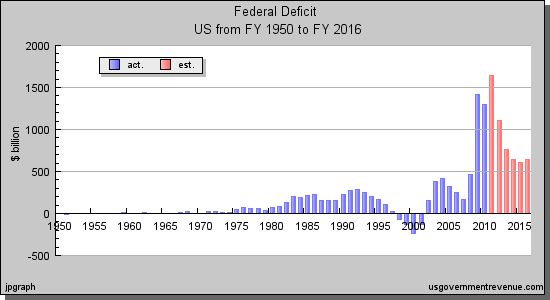 OK… The deficit is how “short” we are at the end of the month… so we find we’ve been putting it on the credit card pretty steady other than a short “blip” about 1998-2002. Just the last couple of years of Clinton and the first couple of years of Bush Junior. Then those “horrible Bush Tax Cuts” hit (along with that giant increase in entitlement spending for the drug gift plan and deficits shot up to… about where there were before… with 2007 / 2008 indistinguishable from prior years. Guess it’s not the tax cuts… But look at that spike in 2009 / 2010. What happened then? Oh, yeah, “Porkulus” the Congressional Gifts and Graft fund… So we dumped an extra $Trillion on “Friends of the Democratic Congress”, nationalized the car companies and a few banks, and generally screwed around with the economy… So now our annual deficit is about $1.4 Trillion and we’re looking at that level for a couple of years, eventually dropping down to “only” about $600 Billion per year for eternity after that… about 3 x the prior annual average. Um, I don’t think that is going to work…

OK, and as our deficit has shot up, post Porkulus, did we cut back the spending, or increase it? (This chart starts in 1996 rather than 1950 so we can get a close look at the spending ramp recently). 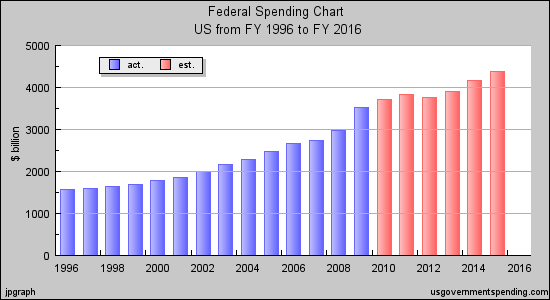 Well. On a $3 Trillion plus expenditure, that extra Pork hardly shows up at all. Looks like a pretty clean exponential to me. (Perhaps parabolic… hard to tell with that Stimulust Blip in it…)

At any rate, clearly part of the problem is that spending spiked up. But it also looks like a bit of a droop in revenues, too. Perhaps there would be a clue if we looked at the revenue side. 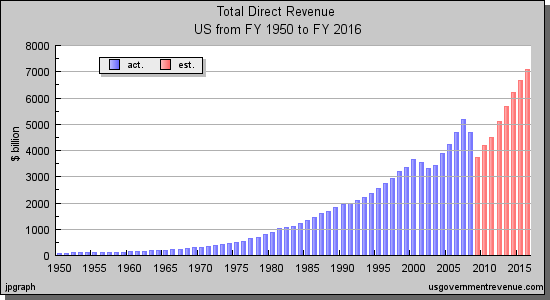 OK, that puts us back at about the same “national revenue” as in 2004. Life was pretty good then, and I don’t see why that would constitute a Horrible Crisis, but then again I don’t understand a lot of things politicians get excited about…

So what happened in 2008? Oh, yeah, the banking crisis. Followed by 2009 and 2010 recession. Plus a load of socializing industry, The Fed printing money like crazy, and a generally hostile business environment. Maybe that’s a clue…

But we’ll look at some other revenue sources and see what they are showing. 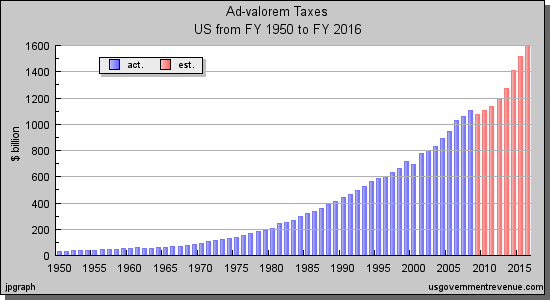 Rising in a nice exponential. “Ad Valorem” is an “according to value” tax. Basically a VAT or sales tax on specific things. What, you didn’t think we already HAD a national VAT or sales tax? Does “excise tax” ring a bell? How about all those taxes on mineral extraction? About a $Trillion of them each and every year already… 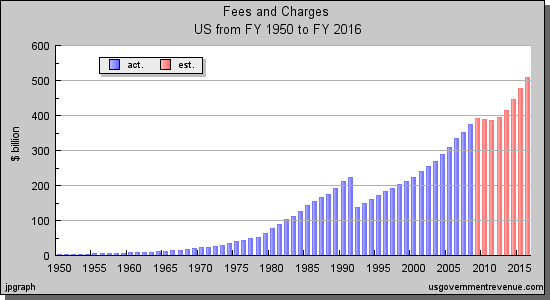 Well, Fees and Charges are continuing to rise nicely… You know, things like paying a fee to use the National Park that you already paid for in your taxes and already owned to begin with… 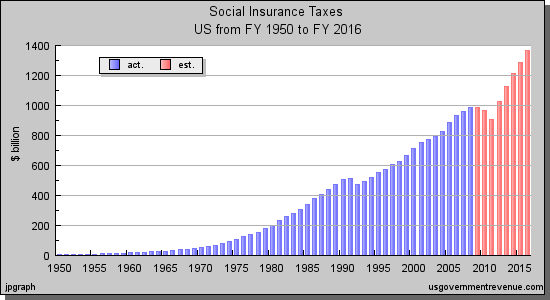 This is all those Social Security Taxes that both you and your employer get to pay (yes, you BOTH get to pay and pay and pay… ) along with a variety of other taxes paid for other kinds of “social insurance”. They, too, don’t account for it… Yes, they have dipped a little, but not much really. Though it does give a bit of a clue. When folks are out of work, those taxes don’t happen. Work? Increase wealth? Make money? Business? Hmmmm… 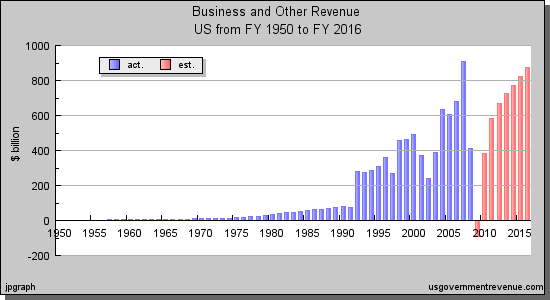 Well, this is the last chart of all the selections available. I presume that they account for the bulk of the total government income and perhaps even all of it. And on this chart we see a spectacular “belly flop” in revenue.

It drops… about $1 Trillion. That is the “Lions Share” of the “issue”. So what we’ve done is basically drive business out of the country with high taxes and Sovereign Risk (all that “nationalization” and “tax the rich” stuff) and those that have not been driven out of the country or out of business have started making losses instead of profits so have no profits to tax.

But don’t worry, the Budget Office is projecting a nice recovery in business growth and profits just next fiscal year… Oh, what’s that you say? They moved to China? Some are just out of business and gone? Small business is being crushed by inflation in the prices of gasoline and raw materials while a broke customer is cutting back on what they buy? Not having a job making it just a tiny bit hard to buy things…

And even WITH that projected business recovery, the projected DEFICIT stays high at $600 Billion / year?

We don’t have a revenue shortage. 2004 was a very nice year and there was plenty of money to run the country and even fight a few wars along with add a major drug benefit plan to the expenditure side.

We do have a recession. But it is one that is showing no signs of ending. A tapped out consumer without a job is not going to get the economy moving with demand-pull, and government spending on horridly wasteful Stimulus of the politically connected Cronies is not going to create new markets and new wealth creation.

Being under threat of increased tax burden is not going to lead companies to hire more people. Having higher medical taxes to fund the health care of each new employee does not make them more attractive. Taking $Trillion of government money and giving it to the competition does not stimulate growth in the widespread industry of the nation; then saying you need to either extort that $Trillion from those same business owners (either as a business tax or as a tax on the owner personally) does not encourage them to be “liberal” in their spending or investing in new businesses. The alternative of borrowing it from China and mortgaging the future while printing money like crazy to “tax the savings in dollars” held by everyone with a dollar denominated account (via inflation) breeds a different kind of fear. And no business likes to invest in new facilities nor hire new employees in a climate of fear.

Basically, Government has cooked the Golden Goose and there are no more eggs.

If you want a recovery of the economy, stop being piggish and stupid. Create a climate where bond holders do not fear having their money taken (either by nationalizing as in GM, or by inflation as in every other bond holder) so folks will invest here, rather than stuff it into Swiss Banks. Cut the corporate tax rate (so we’re not one of the absolute highest in the world) and stop making it insanely expensive to hire a worker. Not just in actual wage and benefit terms, and direct taxes, but also in terms of work place regulations. The wall chart of “legally you must inform” has grown to about 3 feet by 4 feet of very tiny type. Every one of those represents a tremendous burden on an employer, especially a business of just a half dozen employees. That I had to have one to inform me of my rights as a one man consulting company was just insanely stupid. Then start cutting back the liability burden. A company can be sued for, and forced to pay, $Millions for having a bathroom that isn’t the right kind or a counter too high for someone in a wheel chair to see the food. (A real case against a Mexican restaurant…)

In short, get the hell out of our business.

Then we will start doing business again.

Until then, all the boot on the neck will do is drive more money to places where investment is appreciated and where the currency is sound.

A technical managerial sort interested in things from Stonehenge to computer science. My present "hot buttons' are the mythology of Climate Change and ancient metrology; but things change...
View all posts by E.M.Smith →
This entry was posted in Economics - Trading - and Money, Political Current Events and tagged Budget, Congress, Debt, Deficit, President, Stupidity. Bookmark the permalink.

46 Responses to Where Is The Budget Problem?