Will The Real Blue Hawaii Please Stand Up!

As we’ve found odd “discrepancies” in the Canadian data, between GISS, Wolfram Alpha, and Wunderground; so too are there some “odd things” about Hawaii. These “odd things” look like “selective listening skills” on the part of GHCN. Then again, they could just be differences in the “adjustment history” and / or Wolfram Alpha might have a systemic “bug”. (We find an example of what that “bug” might be down below).

The GHCN stations in Hawaii are basically the largest fastest growing airports. Those which went from “grass field to 10,000 foot concrete” in a few decades and surrounded by hundreds of acres of tarmac taxiways and parking lots on all sides. Some of the other stations in Hawaii are located at old military bases without a history of tourism growth or at smaller less used airports with “puddle jumper” service.

They have very different trends.

I was going to make this posting a pointed questioning of GHCN as being highly biased in their site selection… but with the questions about Wolfram Alpha data “purity”, I’ve now got to leave it as just a large “Dig Here!”. I’d love to know of an alternative way to validate the data from some of these lesser known Hawaii locations outside of GIStemp. (Preferably with a nice built in graphing and trend line function like Wolfram Alpha…)

At any rate, my hope is that the Wolfram Alpha “issue” with Canadian data is only a “Canada thing” and that it does not extend to the USA data. My fear is that I’ve uncovered a fundamental flaw that makes it useless as an A/B comparison with GIStemp.

On The Big Island of Hawaii there is a wonderful town of Hilo. It is one of the places where my spouse and I spent our Honeymoon. In a very nice hotel which faces the bay (from the OCEAN side, on a spit of land…) and gives a spectacular view of the water, cruise ships, and the main volcanic mountains.

A modestly sleepy town, away from the spectacular urbanization of Honolulu and Pearl Harbor. On the other far side of the island, they grow Kona Coffee, and just a ways down the beach the Kona resort area has blossomed. Why there? Well, it’s a dead dry desert region with lots of lava and not much else. Lousy for crops and not the place the Hawaiian Cowboys wanted to pasture cows. (Yes, there is a ranching area on The Big Island, complete with cowboys!) At any rate, truck in some sand to make a beach, pave over the oi oi lava, dump enough top soil to hold a palm tree, and you can make a very attractive “resort” that has 95% of the time under sunny skys as you sit on the desert side of the island. (Hilo gets rain some of the time so is lush and tropical and sometimes cloudy and rainy… I love it!)

As a consequence, the “tourism growth” was split with a large part of it going to Kona, not Hilo.

So what happens when you compare Honolulu International (where GHCN / GIStemp focus) to Hilo?

Here are the stations that GISS lists as used in GIStemp at this time. The link will give an easier to read list, but I’ve included a copy here as things with GISS tend to “change unexpectedly” so you must document things every single time you use something from the site… and save copies of every iteration as they will never be the same two months in a row…

First thing to notice is that some of the stations you get when you click on Hawaii are up to 2977 km away. Out there even beyond Midway. GIStemp will reach up to 1200 km to get data to “fill in” missing bits of temperatures at a station, then it will use that modified ‘in-filled’ data to fill in a “grid / box” up to another 1200 km way. So I guess it’s appropriate that they show temperature locations 2400+ km away when you click on Hawaii….

Second thing to notice is that very few of these stations actually extend into 2011. I get 4 of them.

That last one is one of the OTHER places where we spent our Honeymoon. At a resort called something like the “Coco Palms” where we had a private bungalow with an outdoor “lava rock” tub / shower (with a high vine covered privacy wall) in a large area of coco palm trees… “Kings Cottage”? Something like that… the different rooms had different names.

Lihue, and Kauai in general, had a giant growth spurt from sleepy nowhere (as it was when “Puff The Magic Dragon” was written about the far side of the island…) to major tourist attraction. The airport has gone from “grass field” to major international airport in fairly short order. It’ has continued to grow in the last 1/4 century (after our “visit”).

Sidebar: The “average mean” for 2010 per Wunderground was 74 F or 23 C. Basically “middle of the pack” of this data / graph. Not much has changed even with the GISS machinations since 1920 or so when it was also 23 C in Hilo. There may have been a warm bump, but it’s gone now.

The Wunderground history page for Jan 2010 to Jan 2011 puts the “average mean” at 76 F ( about 24.4 C ) that by my eye is just about dead center of this data. Meaning that not much has really changed over the years. Any “slope” is most likely from the PDO cycle that it neatly samples from “low to high” and we’ve now turned back toward “low” and are leaving that 1997-98 top behind us now.

Overall, these graphs look mighty hot! And we see echos of a “step function” around the 1970 – 1976 era… except it looks like it happened on different islands at different times… Yet lately several of the stations have returned to near their longer term midpoints. To me, it mostly looks like the very large airports grew large Heat Islands and the smaller airports have short records of a partial “cold to hot” PDO cycle that is now turning cooler again.

Oddly, the Honolulu Observatory doesn’t have nearly as much “rise” in that time period. But then it gets dropped in the ’80s. I’m sure it’s just a coincidence…

Here are some Hawaii graphs from Wolfram Alpha. It has “another view”…

While I could not find this station in GIStemp, I did find it in Wunderground. They could not give me a 2010 average mean, but I did get the 1980 average mean as 58 F 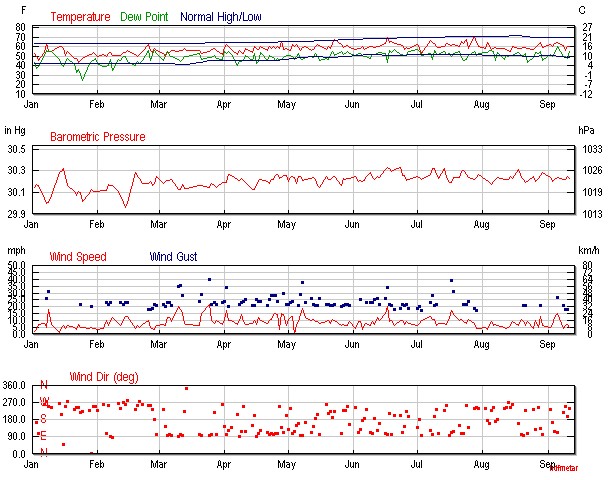 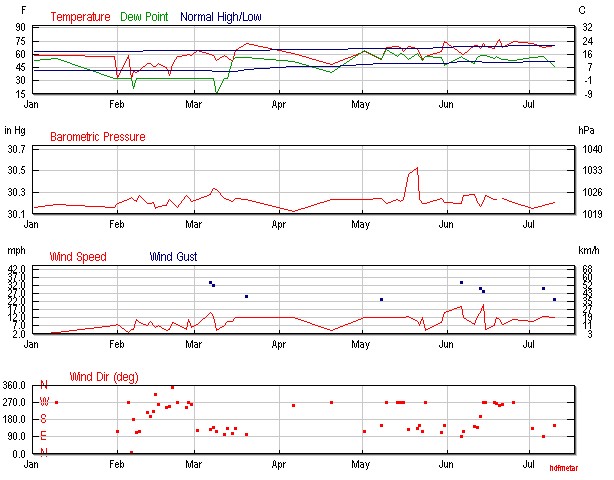 As soon as you see a graph like that, with jumpy blocky shapes to the curve, you just have to think “data dropouts”.

The following year the graph looks a little better, but inspection of the data by month shows why things are so screwy. LOTS of missing data. If you click this link, you can scroll down to the data blocks and see the gaps in it.

So is the “issue” just that Wolfram Alpha is willing to make a graph of whatever it has, and is very uncritical of what “holes” there are in the data? I think, perhaps, yes…

I find Henderson Field interesting as it shows a “jump” when it looks like some work was done to the tarmac. I also find Bikini Atol interesting as a ‘bit further away’ station. So, how do you get such divergent “trends” from monotonically increasing CO2? How do you reconcile them with the GIStemp results? How is it that the stations rising most are the ones kept in GHCN? THE largest and fastest growing airports with the most tarmac…

I was hoping to pick up a “state trend” from the NOAA NCDC data set here:

Then we have the “issue” that Wunderground will present you a “custom” history screen where you can put in long durations of time, but now they will “helpfully” limit the display to a single year after the start date you select.

But at least I can “spot check” a couple of years.

We have annual means along with monthly and some other interesting data. No pretty graphs and no trends over time, but still useful. For some locations there are multiple sites / stations given. Right off the bat for Hilo I notice that “station to station” variation can easily be 1 F or more. How anyone thinks they can get 1/100 C out of data with 1 F error band for the same place is, er, “interesting”…

OK, That’s a bag of worms

Looking at how thermometers that are more or less in “the same place” have a very different average year, and how the “coldest” or “warmest” average year bounces around quite a bit, makes it very clear that a different period of time or a different instrument, or even a different microclimate, can really change your “average”…

Will the REAL Blue Hawaii please stand up?

I’m not sure what to make of this. Has it shown that the data in the USHCN / GHCN has been “preened, cleaned, and adjusted” to change history? Or has it shown that Wolfram Alpha has buggered data and will graph any old thing, holes and all? Or some of each?

I think we can clearly pick out that Massive Jet Age Airport Growth matters, rather a lot. It’s also pretty clear that all the data sets are pretty crappy.

I am a man with two watches wondering where I can get them calibrated so I know what time it might be..

Can anyone think of any reasonable way to “sort this out”? Are there any military temperature records for those military fields that might clarify what the actual recorded temperatures were? Is there anyplace ELSE to get a valid temperature history for comparison?

This is just a mess…

A technical managerial sort interested in things from Stonehenge to computer science. My present "hot buttons' are the mythology of Climate Change and ancient metrology; but things change...
View all posts by E.M.Smith →
This entry was posted in AGW GIStemp Specific, AGW Science and Background and tagged GHCN, GIStemp, Global Warming, Hawaii. Bookmark the permalink.

1 Response to Will The Real Blue Hawaii Please Stand Up!