h/t to Scarlet Pumpernickel for keeping watch on volcanic things while I was off playing at the Atlantis launch.

There are several of the indicia of a pending eruption at Katla. There is an earthquake storm that’s been building: 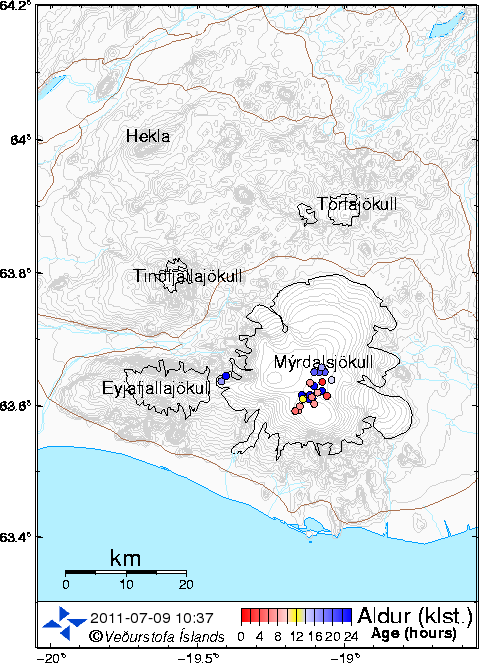 And there has been a jökulhlaup on Mýrdalsjökull (where the ice cap melts from below and makes a flood / rapid rise of the river) as discussed in this article:

small earthquakes in a line across the caldera though.
Some have a depth of less than a km, and are, most likely, just the ice shifting,
but there is steady activity down to 10-15 km depth, suggesting some magma movement.

Police are warning of strong H2S odour on the sands, and possibly lethal concentrations of the gas in low lying areas nearby.

(Katla is the volcano, Mýrdalsjökull is the glacier on top of it)

So Katla is clearing it’s throat… how much it will sing is yet to be seen. So we get to wait and watch…

Historically, Katla has let loose a few years after Eyjafjallajokull (eye-ya-fa-yal-a-yo-kul more or less) and it’s just about time. The linked article also says that the ion concentration in the water shows it to be of volcanic origin:

The river is rising, not clear when it will peak at this stage, water conductivity is high, indicative of high concentrations of ionic salts, and geothermal origin.
I used to take samples of the river water, for the hydrology group, using a boom off one of our trucks, hanging off the bridge across the river. Checking on salts and solutes.
Every time I’d swear the damn sulphide smell got stronger, we had instructions to cut the wire and leave fast if the smell spiked and the river started rising.

So, IMHO, “this bears watching”…

A technical managerial sort interested in things from Stonehenge to computer science. My present "hot buttons' are the mythology of Climate Change and ancient metrology; but things change...
View all posts by E.M.Smith →
This entry was posted in Earth Sciences and tagged earthquakes, Iceland, volcanoes. Bookmark the permalink.