There was an interesting little quake in California just now. A 4.x in the middle of the Sierra Nevada mountains away from most everything.

What makes it interesting? First off, there had been some pre-shocks in the area, so something was building there. Second, it’s closer to volcano country than it is to slip / strike fault areas. Finally, it’s an indication of the general ‘squeeze’ on things in California (also evidenced by all those other dots all over the place showing high overall activity).

If we start getting more of these, it would argue for a bit more awakening of the minor volcanic fields up in the Sierra Nevada areas. Fields that have been quiet for a few hundreds to thousands of years. Perhaps even Mount Lassen (not too far west of this quake) could erupt again. (Last time for it, and a very minor eruption too, was about 1914. It could do more ;-) 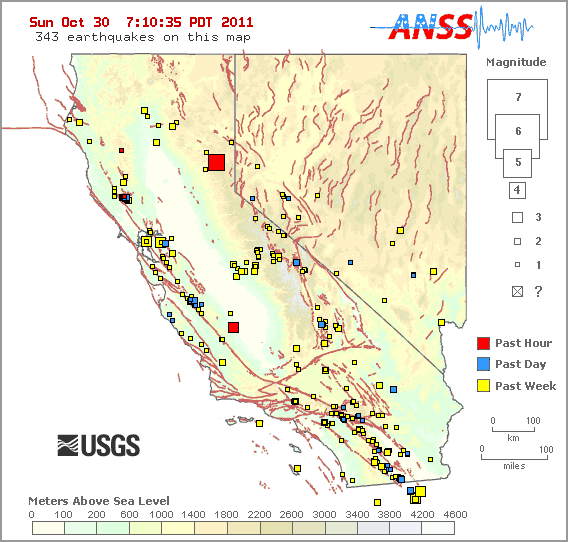 The quake in question is the bigger red square in the upper half, near the ‘kink’ at the Lake Tahoe area on the Nevada / California border. The one that is the size of a ‘4’ per the scale on the right.

And, in the time I was typing this, they have down-rated the present quake from a 4.2 to a 3.8, so the present parameters on it are:

This event has been reviewed by a seismologist.

In almost exactly the same place. Though the size change makes the present quake an after shock. (Sizes often change in the first hour to two after a quake). There is clearly something going on in that spot.

This event has been reviewed by a seismologist.

The other interesting thing is that line of quakes from about Mammoth Lakes out into the central valley. Notice that there is no marked fault in that area? In fact, a lot of the quakes on this map are not on or near a dark red fault line. The “typical” has been a line of quakes on or very near a marked fault, like we see down in the L.A. basin area into the Salton Sea and on the San Andreas up toward San Francisco (where it stays on a fault line, but has curiously shifted inland to the Hayward / Calaveras system…) The overall impression is more compression and action inland and less being relieved via the San Andreas. If that speculation is true, I’d expect more deformation in the old volcanic areas, and from that perhaps a bit more venting. Who knows, we might get back to some of the pattern from a few thousand years ago when we had active volcanic venting from Lassen to near Death Valley. While it would mess up a lot of the place, and a lot of lives, it would be fascinating to see. At any rate, something is up out West.

Unfortunately, being geologic time scale events, it could be ‘up’ for a few hundred years before we see much… If you like geology, you must be patient. Sometimes for generations…

A technical managerial sort interested in things from Stonehenge to computer science. My present "hot buttons' are the mythology of Climate Change and ancient metrology; but things change...
View all posts by E.M.Smith →
This entry was posted in Earth Sciences and tagged California, earthquakes. Bookmark the permalink.

16 Responses to Interesting Quake in California