Well, in a somewhat bizarre twist, it looks like I must reconsider my opposition to CO2 reparations. The notion that the evil sources of CO2 “pollution” must pay those who are lowering the planet’s CO2 levels.

It seems that the Japanese have a nice tool on orbit and set out to figure out who was a “maker” and who was a “taker” in the CO2 production / consumption game. (h/t to kuhnkat in an o.t. comment. Seems they found out that CO2 was largely net absorbed in the industrialized ‘west’ and net created in the ‘3rd world’. So pony up the cash, China, Brazil, and Africa. I want my environmental compensation!

This isn’t that much of a surprise to me. I’d figured out some time ago that trees and bamboo could consume far more CO2 than I “produce” via burning oil and gas. I’ve also pointed out that The West is largely letting trees grow, while mowing our lawns and having the clippings “sequestered” in land fills (along with an untold tonnage of phone books and junk mail…) while the 3rd world is busy burning and cutting down their forests. The simple fact is that “jungle rot” will beat out my “gallon a day” of Diesel any time. Basically, we in the west grow far more wheat, corn, soybeans, wood, lawns, shrubs, etc. than we burn oil. In the 3rd world, they burn their sequestering plants. (And it takes one heck of a lot more wood to cook a meal than it does coal via a highly efficient furnace / electric generator / microwave oven.) But it’s nice to see it documented in aggregate in the “facts in the air”.

On To The Data

OK, the original link had a tiny little graphic. I found a larger version, that I’ve lifted for here. Attribution will be given, and as an ‘educational / news use’, I think it falls under ‘fair use’ doctrine. First off, the original link story is:

I found a larger version of the same graphic here:

http://antigreen.blogspot.com/ (though I haven’t figured out how to get a link to just the article in question from Oct 31, 2011) but since both of them seem to have lifted an NHK graphic, I’m going to reproduce it here: 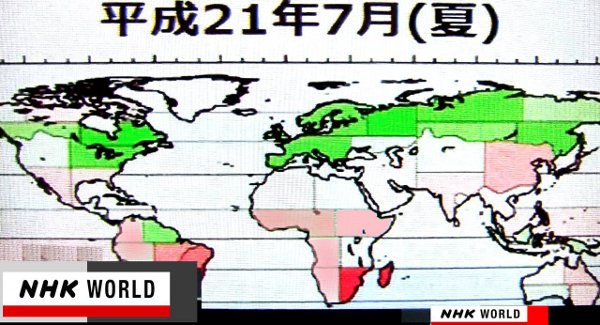 Green is net CO2 absorption. Red is net CO2 release. It’s pretty clear that The West is net absorbing. So, about those reparations, China and Brazil?

I’m adding this ‘Quality improvement’ graphic for comparison from a link in comments: 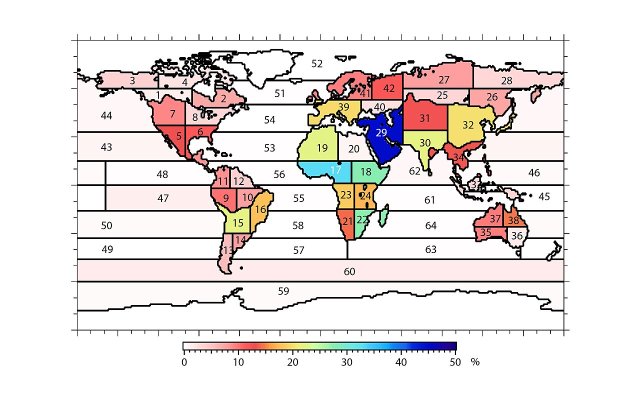 You can see it’s a quite different graphic from the NHK one with different content. Same format, though.

Global warming alarmism is turned on its head and the supposed role of carbon dioxide in climate change may be wrong, if the latest evidence from Japan’s scientists is to be believed.

Standing in front of a telling array of colorful graphs, sober-suited Yasuhiro Sasano, Director of Japan’s National Institute for Environmental Studies told viewers, “The [IBUKU satellite] map is to help us discover how much each region needs to reduce CO2 [carbon dioxide] emissions.”
Indeed, the map at which JAXA spokesman Sasano was pointing (see photo above) had been expected by most experts to show that western nations are to blame for substantial increases in atmospheric levels of carbon dioxide, causing global warming. But to an officious looking TV interviewer Sasano turned greenhouse gas theory on it’s head.

According to UN science the greenhouse gas theory says more CO2 entering the atmosphere will warm the planet, while less CO2 is associated with cooling.

Gesturing to an indelible deep green hue streaked across the United States and Europe viewers were told, “in the high latitudes of the Northern hemisphere emissions were less than absorption levels.”

Sasano proceeded to explain the color-coding system of the iconic maps showing where regions were either absorbing or emitting the trace atmospheric gas. Regions were alternately colored red (for high CO2 emission), white (low or neutral CO2 emissions) and green (no emissions: CO2 absorbers).

Bizarrely, the IBUKU maps prove exactly the opposite of all conventional expectations revealing that the least industrialized regions are the biggest emitters of greenhouse gases on the planet.

Yes, you read that correctly: the U.S. and western European nations are areas where CO2 levels are lowest. This new evidence defies the consensus view promoted by mainstream newspapers, such as the New York Times.

Global warming alarmism is turned on its head and the supposed role of carbon dioxide in climate change may be wrong, if the latest evidence from Japan’s scientists is to be believed.

Standing in front of a telling array of colorful graphs, sober-suited Yasuhiro Sasano, Director of Japan’s National Institute for Environmental Studies told viewers, “The [IBUKU satellite] map is to help us discover how much each region needs to reduce CO2 [carbon dioxide] emissions.”
[…]

JAXA boasts that, “we can reduce the error of the estimated values when we introduce IBUKI’s observation data compared to that of the values calculated in a conventional way based on ground observation data.”

To all policymakers who study the Japanese maps it is apparent that the areas of greatest CO2 emissions are those regions with least human development and most natural vegetation: Equatorial Third World nations.

In effect, this compelling new data appears to show that the ashphalt and concreted industrial nations are ‘mopping up’ carbon dioxide faster than their manufacturers and consumers can emit it. If this is confirmed, it means a cornerstone of man-made global warming may be in serious doubt.

It goes on to explore the question of just how much “carbon taxes” will be endorsed by the folks who are actually consuming and sequestering more CO2 than they are producing. Well, I think we will endorse them just fine, as long as they are applied to the net producers of CO2: Brazil, China, Africa. And, of course, paid to us. I’ll be sitting here holding my breath while I wait for my payment /sarcoff>

The dilemma is whether the established UN global warming policy of the ‘polluter pays’ can any longer be sensibly upheld. Conventional political thinking at previous UN climate conferences was to ‘offset’ carbon emissions by making the worst polluters pay higher ‘carbon taxes.’ But that theory now appears to be rendered redundant being that western economies, believed to be the worst offenders, are in fact, contributing either negligible or no measurable CO2 emissions whatsoever.

Indeed, the IBUKU data indicates that the areas of highest CO2 emissions are precisely those regions with most vegetation and least industry and thus less able to pay.

Thus, the unthinkable could be made real: the greenhouse gas theory of climate change may collapse in the face of empirical evidence that industrialization is shown to have no link to global warming.

I expect we’ll be seeing a whole lot of Song & Dance and not so much logic and reason – as usual… But one can hope.

Personally, I’d like to see that NHK graphic made into a flag and flown over the affair. Perhaps even put on T-Shirts with the slogan “Make the Evil 3rd World PAY for CO2 Pollution!!”. It would certainly get some “discussion” going ;-)

In doing some digging I came up with some actual source press release publications from Japan. These are the “laymans version” but have some decent content:

I found this methane graph from that press release rather interesting. Isn’t methane supposed to be far worse than CO2?

Such pretty red dots in Africa, Saudi Arabia, India / Pakistan… (May they someday decide who owns Kashmir) Maybe we can get the OPEC nations to pony up some reparations to The West, too! I’ll take mine as Diesel, please. A gallon a day ought to do it… It also looks like “high cold places” in Russia, Greenland, and Alaska tend not to have much stuff rotting and making methane. Maybe we can get Brazil to pay reparations in Beef. About a pound / day / person ought to do it… What do you say, Russia and Alaska, “A STEAK A DAY – IT’S ALL WE ASK” sound catchy?

Has more on the CO2 story. Along with an ‘uncalibrated’ CH4 graph, there is this one of CO2: 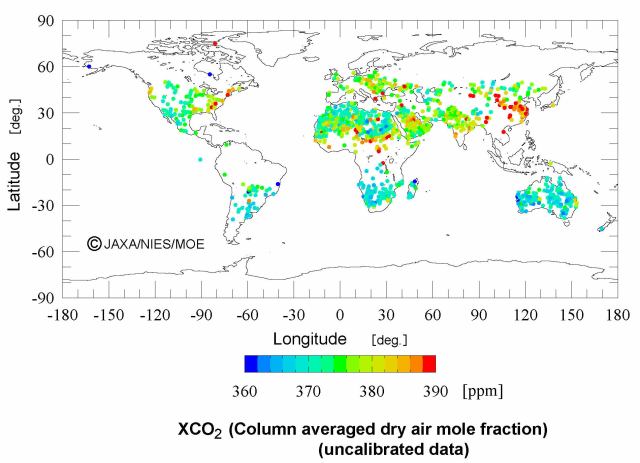 China sure stands out…

Then again, it looks like maybe Georgia (the USA one, not the original…) may need to pay reparations to California… And it’s pretty darned clear to me that New York City needs to pay a boat load of reparations to “Fly Over Country” from Nevada to Texas and on to Ohio. Oh, and Mr. Gates up in Seattle? Looks like you folks owe some to Oregon, Idaho, and Montana, so open that wallet. Now please.

One other small note: Looks like Australia and New Zealand get a “Climate Guilt Free Pass” for sure. Just look at all that blue!

Go you Kiwis and Oz! I suggest a “carbon tax” on all minerals shipped to China. About what you pay for Chinese imports ought to cover it ;-)

I’m sure there are more links; and more formal papers out there. I’ve not had the time to dig into them. If anyone can find peer reviewed papers and post links, that would be “a good thing”. For now, I think it’s pretty clear that the “CO2 From the Evil Western Polluters” meme has a serious hole in it…

Gotta love those Japanese researchers. Just take the data, show what it says, and let the truth land where it may. Well done, sirs. Well done indeed. I think I feel a trip to the local Sushi Bar coming on. “Yellowtail” / hamachi is my favorite, and it comes from farmed fish in / near Japan. Easy way to say “thank you”, IMHO… Oh, and some authentic Japanese Sake… Kampai!

UPDATE: Adding an animated GIF of the XCO2 from comments

I’m not sure what makes XCO2 different from CO2, but it is stated as ppm as the units, so I presume it is a concentration measure, perhaps with a calibration marker? At any rate, ppm and the values make it look to me like a straight CO2 concentration metric. With that, the graphic:

A technical managerial sort interested in things from Stonehenge to computer science. My present "hot buttons' are the mythology of Climate Change and ancient metrology; but things change...
View all posts by E.M.Smith →
This entry was posted in AGW Science and Background and tagged CO2, Global Warming. Bookmark the permalink.