How To Explain Skepticism

As usual, I was doing one thing and ran into something else. The short form is that while looking up some particular science details on an unrelated topic, in a list of Scientific American Articles was one on ~’How to sell science to congress.’. What struck me about it was that it made clear two things.

2) Why arguments from the Skeptical Side get heard, and go “THUNK!” on the congressional floor.

It’s all about The Story.

In short, the Catastrophic Human Caused Global Warming Story has it all. First off, there’s a looming catastrophe. Second, we have a Guilt Complex sop for some folks and a Self Righteous sop for others (depending on your point of view: Are you causal or are they causal? Guilt or Self Righteous Indignation.) Thirdly, it can be averted if The Congress (or Chamber of Deputies or House of Lords or Parliament or…) only take action. That is, the Politician can be a great heroic figure. Finally, there’s that little fact that by picking “winners and losers” in the economic arena, the various Political Classes can either feather their own stock portfolios, feather those of their donors, or divert money to Friends Of The Politician’s District.

We’ve seen that same process at work in the “Spendulus Bill” were a $Trillion in tax payer money was handed out to Friends Of Congress to assure their favored agencies, banks, investments, NGOs and all were well cared for while nominally “Saving The Economy From Collapse”. The Story was one of impending catastrophe, Self Righteousness on the part of Democrats (Damn Bankers!) and perhaps some Guilt on the part of Republicans who had voted for things like the CRA (that forced banks to make bad loans) and regulatory relief (that let them avoid being collapsed a decade or two sooner from CRA by letting them package and third party the debt as SIVs Special Investment Vehicles et. al.). Thirdly, “The Experts” ASSURED congress that the great economic collapse catastrophe could be avoided, if only they SPEND! What could be better than being forced to spend money? (That they then carved out chunks for Friends Of The Well Connected is just business as usual..) They were truly just being Heroic Figures doing their duty (and salving their Guilt or feeding their Self Righteousness).

So what’s wrong with the Skeptics “Story”?

Pretty simple. Lots of it consists of “THEY are wrong on this obscure technical point.” Sometimes it is “They are wrong as it hasn’t happened.” Occasionally it is “These data are conflicted or compromised, they might or might not be wrong.” Rarely it is “It could cause vague damage to the economy.” Of all of those, only the last one really has much appeal to a Congressman or MP.

(No, I don’t get bent out of shape at using male gender terms as the non-gender form. Classical English lost the ‘neutral’ gender and collapsed it with the male. Losing the feminine gender terms and collapsing them with the male is the next logical move. Getting wound up in things like Congresswoman, Congressperson, Congressmember, et al is a waste of time. They are lumpy and too long. Language evolution favors the short and flowing. They won’t stick. If it bothers you, then mentally stick in whatever neologism you like. We are all part of the human race, not the huperson race, and the loss of gender significance to the particle ‘man’ is already common in words like that where we just don’t notice. Or care.)

What we need to do is find a way to explain what we all understand: That the AGW narrative leads to a ‘cure’ that is really The Horrible Thing. And present findings in a way that explains the Heroic Narrative that comes from the Skeptical side while showing how the Heroic Narrative of the AGW side is a false narrative. (Holding up Spain as an example of Green Gone Bad looks promising at the moment…)

Ban coal? Destruction of mining economies, loss of livelihoods and destruction of whole geographies economies and increasing poverty. Rampant fuel poverty and an implicit attack on the poor. Promoting the use of coal is the path to economic prosperity and the congressman can be the Heroic Figure standing up for all those poor and supporting that core of American Power. (That they can also help ‘their friends’ in the coal industry and feather their stock portfolios and direct money toward Friends Of The Congressman are things I’m sure they can work out for themselves, just as the Democrats long ago figured how to do the same with organization like Acorn and the NSF and subsidy / bailouts for the likes of Solyndra and Fisker and GM Auto Unions.) Oh, at then at the end mention things like “The GHCN data are not fit for purpose and that means the Global Warming argument is more computer fantasy than actual science. Oh, and the AGW side have suborned the Peer Review process, so don’t put much stock it in as proof of what’s right.”)

Basically, build the Heroic Narrative first, then show the foundations in the science “issues” being explored as supporting data. Oh, and make it an interesting story if you can… not so much the whole numbers and statistics thing, more the human impact / human actions stuff. So while showing that the least squares fit trend line shifts in one set of data vs another, mention along the way that humans make both data sets, humans make errors, we’re hanging The Fate Of Humanity on trust in one vs the other, and they can not be trusted…

FWIW, right now I’m writing up some of my findings on GHCN, so this is particularly useful to me, now. I’ve decided to do a rewrite over this weekend, so don’t expect much in the way of postings for a day or two while I “knock it out”, ok? Less stats and numbers, more human interest story… more interesting character development too ;-)

Back at the article

As things on the internet tend to go “Poof!” some times, I’m going to quote a couple of pertinent bits from the article. Just enough so that if it does evaporate, there’s still some context here. You are encouraged to go read the entire original as it is more effective than the bits I’m quoting here.

Don’t Be Arrogant, Do Tell a Story: An Interview with Congressman Robert Walker about How Scientists Should Interact with Congress

Congressman Robert Walker represented Pennsylvania in the United States House of Representatives as a Republican from 1977 to 1997. He’s has taken an interest in helping scientists understand Congress, and he invited me to his marble office building on K Street in Washington DC to interview him. Walker was Chairman of the Committee on Science and Technology, then called the Science Committee. I asked him some questions that had been burning in my mind about how we scientists should behave when we’re interacting with Congress.

So this article is a Q&A with a congressman about how to be effective. They spend a while on the “Don’t be arrogant” point. Something that isn’t much of a problem on the Skeptics side, near as I can tell. We’re a pretty humble bunch. Just keep it that way and don’t wave credentials in a condescending way. You are there to educate and inform as a professional, to another professional. Like a lawyer working for an MD, you both have credentials… you are there to provide a service.

They then go on to ask for an example. They pick the guy who does Astronomy on TV a fair amount. Decent showman (even if he is wrong about Pluto not being a planet ;-) 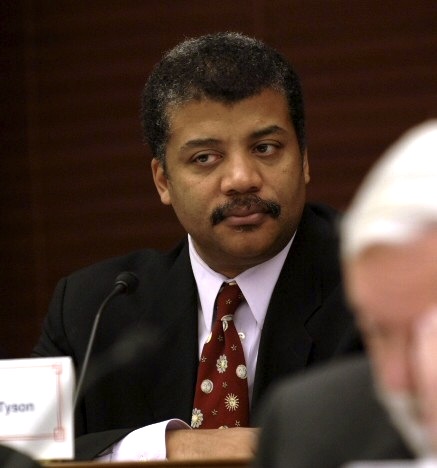 Neil deGrasse Tyson. Neil is just fabulous at taking science concepts, boiling them down in a way that the general public and politicians can understand it.

MK: What does he do that’s so compelling?

RW: Well, for one thing he loves his subject. I remember when we were doing the Aerospace Commission, where we went down to a Conference Center down here in Virginia that’s owned by the government. We’d finished dinner and it was dark out. I was walking back alone and so on, and I came back. Here was Neil. He had members of the Commission and the staff sitting on the steps of one of the buildings and so on. He had a segment of the sky, and he was pointing out. He was telling all the stories of the mythologies, the stars, what part of the galaxy they were, how far out they were, and all of this kind of stuff and so on. He was excited about it and so on, and he was putting it in story terms and so on. The group was just absolutely enthralled by it.

So have some passion, make it accessible, and put it in a context of human dimensions. Check.

MK: So let’s say you were a scientist, and you were planning to make a pilgrimage to D.C. and go have your 15‑minute meeting with your representative. How would you make a good impression?

RW: Well, first of all to recognize that most members of Congress don’t serve on Committees that have a science orientation. So you have to make the presentation in a form that is understandable to a guy who is not going to be looking at the subject matter in any depth. Congressmen just don’t have the bandwidth in order to do things in depth. So if you want to get it across take your best punch line‑‑what it is you’d like to see as the end product, why you think it’s important‑‑and then be excited about the fact that if Congress actually did it, that it would make a difference.

That’s what members of Congress want to hear. They don’t want to hear about the bench tests. They don’t need a lesson in all of the physics theories or chemical theories that go into it. What they need to know is why it’s important, what needs to be done in order to bring it to fruition, and why that would be an exciting outcome.

Lead with the punch line, don’t save it for the end, be a bit superficial on some points (just have the backing available for notes to submit if needed) and explain why it is important in human and governmental terms, not “why it matters to science” or “why the other guy is wrong”. (Though I suspect that saying “This is why it matters AND the other guy was wrong on this point (details attached) so his story is broken” would work well. I’ll likely take that approach as what I’m saying IS basically “their stories are based on broken data, so broken stories”. But as supporting points, not preamble nor plotline…

So, can you think of ways to take common Skeptics points ( like “CO2 doesn’t cause acidification the ocean is neutralizing not acidifying” and “CO2 was higher in the past and we didn’t have thermal runaway” and all the rest) and turn them from “They are wrong on a technical point” into “Here is a Heroic Narrative from this point and why their Heroic Narrative is not going to be there for you.”?

A technical managerial sort interested in things from Stonehenge to computer science. My present "hot buttons' are the mythology of Climate Change and ancient metrology; but things change...
View all posts by E.M.Smith →
This entry was posted in Human Interest, Science Bits and tagged Congress, Global Warming, Narrative, Pitching Science, The Story. Bookmark the permalink.

23 Responses to How To Explain Skepticism