For most of the summer my Spouse has had insomnia. The degree has varied, but pretty much about 1/2 the time she was not sleeping enough (or at all) and the other half was not “restful” in that deep regenerating way.

I’d noticed that she was up much later than normal, but had not been informed about the depth of the problem. Her normal day ends at about 9 pm to 10 pm. In bed, gone to sleep, and waking up spontaneously about 5 AM. Sometimes in hours starting with a 4… Me? I can be awake any time the moon is overhead (especially full moons) and have been known to climb into bed just as she is waking up.

So both being awake at 11 pm to 1 am is a bit, er, unusual. I’d just noticed a bit of unusual. Two days ago I was “brought up to speed” on things. That sent me off looking for causes (ever the “Fix The Problem” guy…) One factoid to note: I had done the ‘seasonal bulb change’ from incandescents to high efficiency with the arrival of warmer weather; but this time I had bought a couple of more LED bulbs. Slowly adding to the inventory in use. Transitioning from CFL ‘curly bulbs’ to LEDs now that the price of LEDs was in the $10 range and the PG&E subsidy of CFLs had ended (with the ban on incandescents, who needs to care what you chose any more?…) they were closer in price and I liked the ‘whiter’ light of the LED along with the ‘no mercury’ feature.

So one natural question was just “could it be the lights?”. SWIMBO has seasonal affective disorder if she does not get some added UV during the deep of winter, so is a bit more sensitive to her lighting environment than I am to start with. Could it run both ways? But what WAS the spectrum of LED bulbs, anyway? I knew some of them used UV LED chips and phosphor, so might it have something to do with that? That was my first thought, anyway.

On digging into it, I found that most LED bulbs do not use UV. Most use BLUE light, and then just downshift some of it to the green / yellow / red bands to make a generally ‘white’ light source. Hmmmm…. Blue…. I remembered reading something about blue light and Jet Lag a year or two ago…. Folks had found that BLUE of a certain range reset your Jet Lag, so you could get these little glasses that shone a blue light, an LED light, into your eyes while flying to keep you “up” and adjusting your clock to the daytime at your final destination.

Could it be that simple? Could this be a case of The LED Blues? Literally?

A few more minutes of web wandering brought up a very useful chart. From the Wiki on LED lighting: 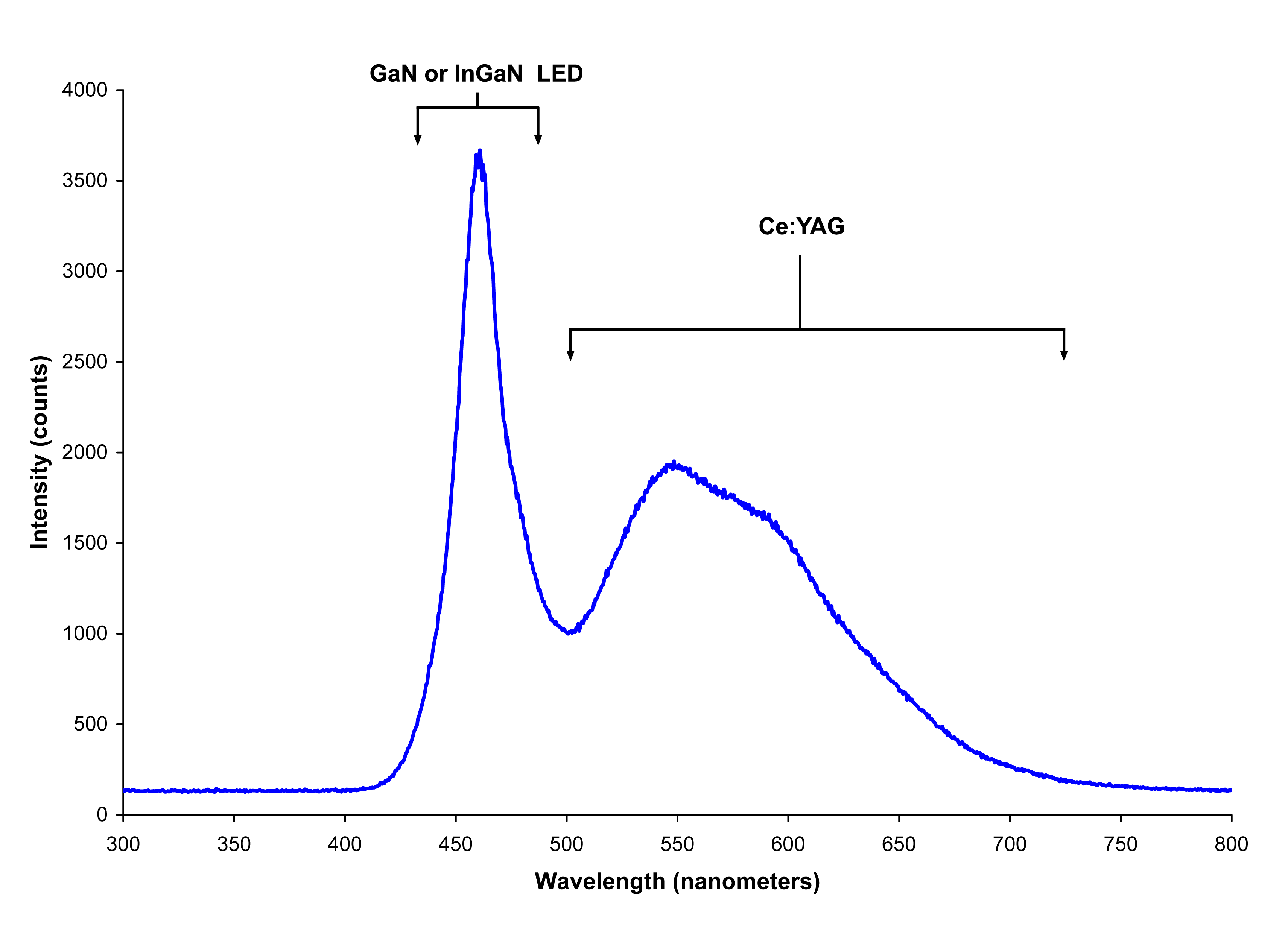 Notice that big spike at about 460 nm? That’s the blue that resets your biological clock to “daytime now”.

Until the 21st century, scientists only knew of two types of light-sensitive cells in the eye: rods and cones. But in 2001, David Berson from Brown University established that the eyes of mammals contain a third type of cell for absorbing light.

“This has been a very exciting discovery in the whole world of chronobiology and vision research,” said Jay Neitz, a professor of ophthalmology at the University of Washington in Seattle. “We always thought rods and cones were responsible for circadian rhythms and then we find there’s a particular cell that [sends signals] to the superchiasmatic nucleus, the brain’s central clock important for daily biological rhythms.”
[…]
As it turns out, melanopsin proteins are most sensitive to light in the wavelength range between 440 and 460 nanometers — in between indigo and blue. Many white LED designs create blue light centered at around 450 nm.

A 2005 study by chronobiologists in Basel, Switzerland showed that human volunteers exposed for two hours to 460 nm light at night experienced greater reductions in melatonin, a hormone regulated by the body’s circadian system, than when they were exposed to a roughly yellow-green light with a higher-wavelength of 550 nm. Melatonin, in addition to helping the body maintain a regular 24-hour rhythm of wakefulness and sleep, is an antioxidant compound that has been shown to protect biological molecules such as DNA.

So those LED bulbs are pumping out a great big peak right on top of the sensitivity peak of the eye for resetting the biological clock.

Well, I changed all the LED bulbs out for Incandescent bulbs (known to be blue deficient and no issues of UV leakage or what colors of phosphor are used) from my fairly large inventory.

Long story short: This morning I was informed that a long and restful deep sleep was the result. “First time in months”.

I also noticed less of an ‘edgy’ feeling this morning. Not a lot, just some.

We’ll be leaving the Incandescents in for a while before doing a ‘challenge’ or trial of the LEDs again. As one of them had been in the reading lamp next to the bed, and the spouse is fond of reading in bed, we’re hoping ( I’m hoping) that is the only one that is ‘an issue’. As I now have about $75 worth of LED bulbs, I’d like to use them somewhere… and with a 10 year or so life span, it will take a long time to use them up in the garage (where disappointing bulbs go to do penance…)

I’d use them for yard lights, but then the bunnies would be up all night too ;-)

So now I’m looking around trying to figure out what lights are used mostly during the daytime as candidates for the LED bulbs. Perhaps in the office… or over the in the Dining Room. (Then again, one late dinner and…)

It’s not the first time that the impact of white solid-state light (SSL) on human health has been questioned, but a new research project says that LEDs, for the same photopic flux output, increase “pollution in the scotopic and melatonin suppression bands” by five times relative to high-pressure-sodium (HPS) sources. The publication originating from institutions in Italy, Israel, and the US recommends regulatory limits for future SSL products.

The research entitled “Limiting the impact of light pollution on human health, environment, and stellar visibility” was published in the Journal of Environmental Management. The authors include Fabio Falchi of Italy’s Light Pollution Science and Technology Institute (ISTIL), Christopher Elvidge of the National Geophysical Data Center in Boulder, CO, David Keith of Marshall Design in Boulder, and Abraham Haim of Israel’s University of Haifa.

The research studied both LED and metal-halide (MH) sources relative to reference HPS sources. Both the LED and MH sources produce white light that includes more blue content at shorter wavelengths than do HPS sources that produce orange- to yellow-tinted light. Like much similar research, the new study apparently didn’t test actual subjects, but rather relied on prior research on melatonin-suppression levels relative to spectral content. The researchers came to the conclusion that MH lights suppress melatonin at a rate 3 times greater than HPS lights and LEDs suppress melatonin at 5 times the HPS rate.

The magnitude of the impact of melatonin suppression remains in debate. The secretion of melatonin has been shown as key in normal sleep/wake cycles and circadian rhythms. Some researchers also believe that it has “anti-oxidant and anti-cancerous” properties as the new research points out.

In depth technical look at designing LED driver circuits and some of the oddities of the little beasts. Nice chart of color vs nm.

If you are having any sleep disturbance issues, it is a good idea to look for some ‘less blue’ and ‘more yellow’ lighting alternatives to see if they make a difference for you. Probably also a good idea to make your laptop or iPad screen background color less blue as well. ( One article looked at iPad and laptop use and insomnia finding a connection with blue color).

Using “Daylight” type CFL bulbs is probably a bad idea in places you hang out late at night just prior to bed time. Using “white” LED bulbs is also likely to be an issue.

It doesn’t effect everyone the same way. I’m only marginally aware of it (but I’m a ‘night owl’ anyway) while the spouse had her sleep patterns all messed up.

We didn’t notice any issue using the old 2700 K ‘yellowish’ CFL bulbs or with incandescents. Only with the newer LED bulbs in a whiter color temperature. It might be that finding a 2700 K LED bulb could work (though with that spike, I doubt it. IIRC, the LED bulbs we’re using were supposed to be the incandescent color temperature range but might have been 3200 K. Still, not the “daylight” type at all. I’ll check the bulb a bit later and put up the specifics.)

I’m also very glad I had a buying binge and overbought Incandescent inventory. IFF it turns out that they are the best for undisturbed sleep, I’ve got enough for a lifetime. At least in the ‘evening’ parts of the house.

I continue to be amazed at the subtle things that cause our bodies to react and impact on our mental state. Even just the color of lighting used. Maybe aesthetics has more to recommend it than just what looks nice.

A technical managerial sort interested in things from Stonehenge to computer science. My present "hot buttons' are the mythology of Climate Change and ancient metrology; but things change...
View all posts by E.M.Smith →
This entry was posted in Human Interest, Tech Bits and tagged Blue, circadian rhythm, Insomnia, LED. Bookmark the permalink.