OK I was watching a “Ted Talk” about geoengineering and how cheap and effective it could be to put a load of “sulphate particles” in the upper atmosphere as a coping method (on the assumption we need to cope) if we don’t stop burning fossil fuels (on the assumption we need to stop burning fossil fuels).   Even though I think the “need” is non-existent, that didn’t stop the old brain from taking the idea and “running with it”.

A quick web search shows lots of volcanic injections, and that they inject a lot of Sulphur Dioxide.  (Over time it looks like it ends up as sulphates and related).

Several web pages all talk about putting Sulphur Dioxide into jet fuel to put it at altitude.  That one just seem silly to me.  Sulphur burns.  Just leave the sulphur in the fuel that’s already there and it will turn to the oxide all by itself.  In fact, I’ve suggested several times that we just equip our jets with two loads of fuel.  They already use one set of tanks for take off and another set for cruise, so just put the super low sulphur kerosene presently mandated into the take off and landing tank(s) and put the old sulphur laden fuel back in the other tanks.

That, alone, ought to reduce problems (if there are any)…

But still… I thought… might that not be improved? 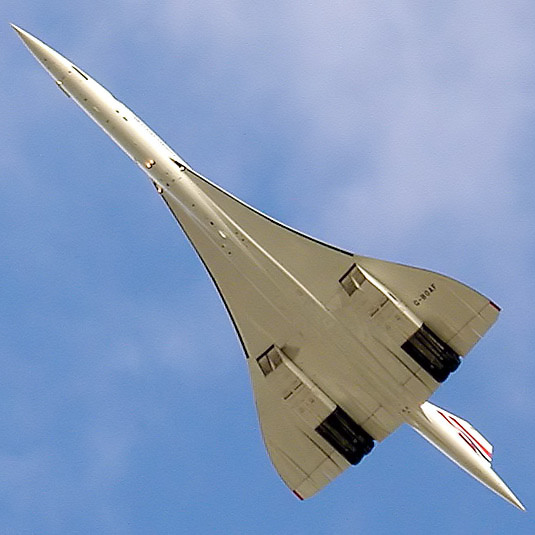 First off, we want this stuff as high in the air as we can get it. Well above the present upper tropospheric / lower stratospheric plane level of 30,000 to 40,000 feet. So we need to bring back supersonic flight. Think “Concord on Steroids”. Mach 2 or so, but Mach 3 would be even better. Plan for flight levels up around, oh, 50,000 to 100,000 feet.

OK, get enough folks signed up for that, you have a LOT of fuel burn way up there. But how to get enough S up that high? Regular old jet fuel is unlikely to be enough….

So h/t Jason Calley for the Brilliant Buzzard:

How About A Funny Fuel?

So that got me thinking about adding more S to a carbon base fuel. There are lots of ways to do that. So if the fuel needs to be thicker and heavier, well, we can populate a carbon backbone with many Sulphur bonds.

But is there a simpler way?

The “limit case” would be Carbon Disulphide. SCS as it were. It’s a liquid. It burns very very well. (Maybe a bit too well. While Jet Fuel is about a 200 C autoignition point, CS2 lights up at 90 C so might need to be ‘diluted’ a bit). It is a non-polar solvent, so ought to readily mix with other jet fuels, if needed.

Per the wiki, there is a way to make it ‘non-flammable’ in storage, if needed.

So if need be, we can use something like that to reduce hazards in storage / crashing.

Clearly there is a need for a load of R&D on engines to make sure we can use the stuff without things like excess blade erosion, or what concentrations or what fuel additives are needed to prevent such. Given that fuels are already erosive and corrosive, I have to think this is a solvable question.

So that’s my “bright idea”, given freely to the world. (If anyone uses it, a footnote would be appreciated… I’ve always wanted to be a ‘footnote in the history’ of something or other… ;-)

Make a plane folks would love to fly in, super fast and super high. Have it be “saving the world” so there’s no guilt to enjoying the flight. And maybe even get some of that Green Subsidy Money so it’s cheap enough folk will love traveling all over the place. Along the way, put a nice SO2 (becoming sulphate) blanket on the world…

As the blanket develops, the quantity of CS2 being used in the fuel blend can be adjusted as desired, including down to zero after folks realize that making the place colder wasn’t needed after all… Yes, I like planning for all contingencies.

Heck, maybe we could even coax Burt Rutan out of semi-retirement to make it look really cool ;-) Or make it an option on the first stage of his Starships… “Go to space and save the planet” has a nice ring to it ;-)

I’ve not “done the math” to figure out if there is enough readily available sulphur in the world to get enough in the air to do much. I’m pretty sure there is (there’s a lot of sulphur. So much is removed from other fuels that we don’t mine it much any more, so I think there’s quite a bit around). It is one of the more common elements.

I’m sure eventually someone will point out that SO2 is rough to breath. I think as long as flights do not go along one behind the other that ought to be OK. There’s a lot of mixing at mach 3 ;-) As take off and landing would be done on straight Jet hydrocarbons, I think it would be manageable. It might also be possible to find other materials to inject into the post burn exhaust to take the SO2 more directly to a desired particulate. Perhaps a “sodium afterburner” ;-)

Besides, I think the “way fast” aircraft just look “way cool” too and would like to see them making a comeback, even if they do need a bit of PC wool on them ;-)

After takeoff, the wing tips are ‘drooped’: 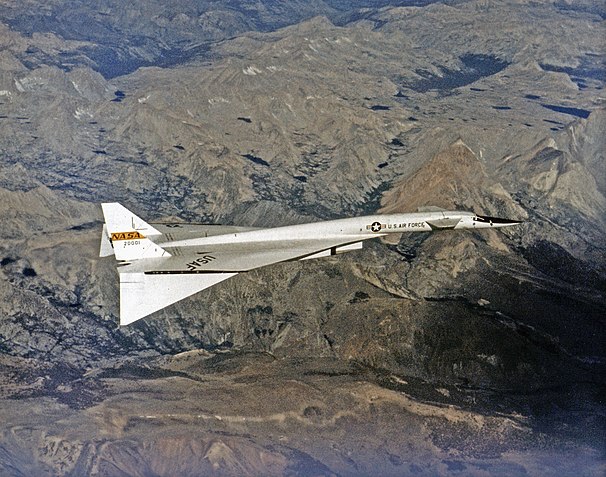 Surely we can do it. To save the planet… Think of the children!!! If it saves just one life…

A technical managerial sort interested in things from Stonehenge to computer science. My present "hot buttons' are the mythology of Climate Change and ancient metrology; but things change...
View all posts by E.M.Smith →
This entry was posted in AGW Science and Background, Tech Bits and tagged Carbon Disulphide, Concorde, CS2, Geoengineering, Global Warming, Supersonic, TU-144, Xb-70. Bookmark the permalink.

21 Responses to CS2 A Modest Suggestion