Throw Obama Off The Fiscal Cliff

So I’m looking at the news, and it’s all a load of hand wringing over the Fiscal Cliff.

Regularly it’s parroted that the economy would be destroyed, depression is assured, and the end is neigh if we don’t prevent falling off the “Fiscal Cliff”.

This comes largely from a bunch of economic projections that are based on Keynesian ideals of excess government expenditures (over revenue) being somehow guaranteed.

So that got me wondering “What IS the Fiscal Cliff?” and even “Why does it matter?”.

The Wiki on it seems to have a reasonable write up of the facts.

It also includes an interesting graph (that is somewhat hard to interpret as the labels are minimal). 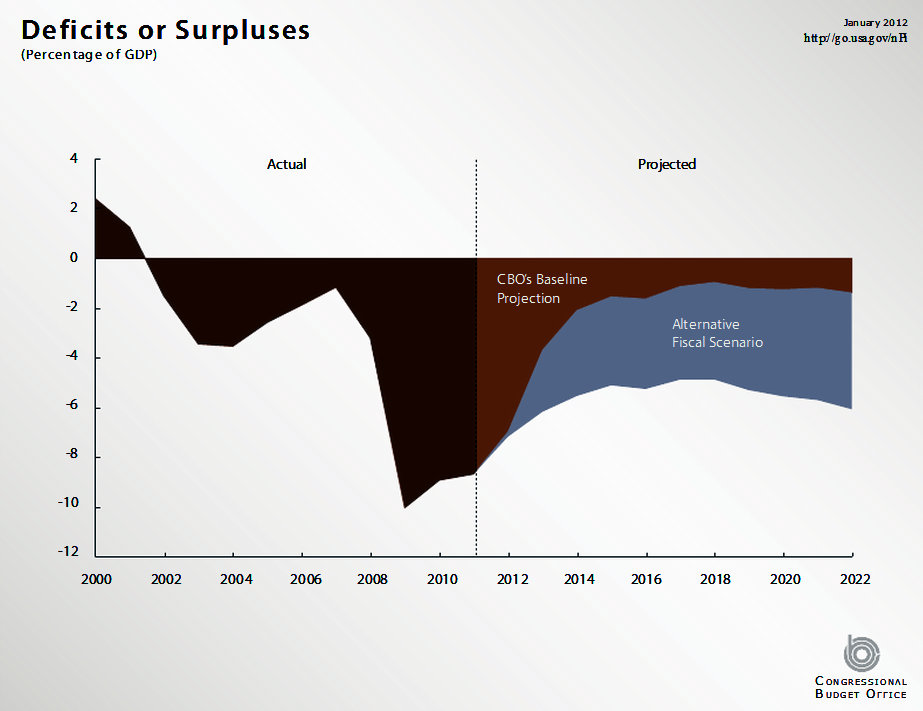 Deficit vs time under present vs Fiscal Cliff scenarios

So the blue area is what happens under the Fiscal Cliff, while the grey / dark are what happens if the budget reductions (“Sequestration”) are prevented and Bush Tax Cuts or similar are continued.

On a top level look, it looks to me like both are an ongoing deficit. So my fist instinct it to take the lesser deficit. That’s “driving off the cliff”…

Looking inside the details shows that the ‘cuts’ in spending are not really much at all. Most of the change comes out of higher taxes. While I’d hate to see higher taxes, The People have spoken and selected loads of spending, so might as well let them see what that feels like as taxes.

For the sequestration part, the wiki doesn’t really show all that much bad, IMHO.

The spending reduction elements of the fiscal cliff are primarily contained within the Budget Control Act of 2011, which directed that both defense and non-defense discretionary spending[note 3] be reduced by “sequestration” if Congress was unable to agree on other spending cuts of similar size. Congress was unable to reach agreement and therefore the sequestrations are expected to take effect in early 2013. The scope of the law excludes major mandatory programs such as Social Security and Medicare.

On the one hand, exemption of entitlements assures that the real core problem of growth of entitlements is not addressed. OTOH, it means you can’t be accused of ‘granny off the cliff’.

Thats ALL? $110 Billion out of several $Trillion? Chump change.

During 2013, defense and non-defense discretionary spending would be maintained around 2012 levels due to the sequester. However, the spending begins to rise thereafter, but not at the pace projected prior to the sequester. In other words, the trajectory of spending increases is reduced, but spending is not frozen at 2012 levels. Defense and non-defense discretionary spending increases from 2013–2021 would be about 1.5% annually, significantly below the prior decade.

For example, according to the CBO Historical Tables, defense spending (including overseas contingency operations for the wars in Iraq and Afghanistan) grew from $295 billion in 2000 to $700 billion in 2011, an annual growth rate of 8.2%. Non-defense discretionary spending grew at a 6.6% annual rate during that time, from $320 billion to $646 billion.

So we’ve got somewhere around $400 Billion of defense spending on a couple of wars that could be junked and still have plenty of military? As I’m no fan of shoving money down the rat holes of wars, I’m not seeing the downside here.

Baseline projection. The CBO has been publishing baseline projections since 1985. Under “the baseline”, tax cuts are allowed to expire and spending cuts are implemented in 2013, resulting in higher tax revenues plus lower spending, deficits, debt and interest for the next decade and beyond. Future deficits would be reduced from an estimated 8.5% of GDP in 2011 to 1.2% by 2021. Revenues would rise towards 24% GDP, versus the historical average 18% GDP.

So we’re talking a roughly 6% of GDP tax hike. Personally, I don’t see that happening. As we’ve seen before, no matter what the tax rate, folks just find ways (even by just not working) to avoid tax revenues being over 18% of GDP. So nominally, it’s a huge tax hike. In reality, I think revenues would not rise all that much (though likely not for the reasons the politicians expect).

From the wiki, again:

The following provisions of current law are most involved in the fiscal cliff:

Expiration of the Obama tax cuts provided for in the Tax Relief, Unemployment Insurance Reauthorization, and Job Creation Act of 2010;

Across-the-board spending cuts (“sequestration”) to most discretionary programs as directed by the Budget Control Act of 2011;

Reversion of the Alternative Minimum Tax thresholds to their 2000 tax year levels;

So Obama gets a load of tax hikes. We get what is really just a ‘spending slowdown’, not quite a freeze. Then we get a load of folks hit with the AMT. I suspect that might make a few more folks willing to vote for ‘tax cutting’ Republicans at the mid term election…

Expiration of measures delaying the Medicare Sustainable Growth Rate from going into effect (the “doc fix”), most recently extended by the Middle Class Tax Relief and Job Creation Act of 2012 (MCTRJCA);

Expiration of the 2% Social Security payroll tax cut, most recently extended by MCTRJCA;

Social Security gets more funding so lasts longer. I’m good with that. Doctors start to realize that maybe voting Democrat was not such a good deal for them. Workers, nationwide, see some of the costs of the socialism they vote for.

The downside is?… Some folks pay more taxes? Grumpy doctors?

Expiration of federal unemployment benefits, most recently extended by MCTRJCA and
New taxes imposed by the Patient Protection and Affordable Care Act and the Health Care and Education Reconciliation Act of 2010.

Some number of folks comfortably on The Dole get kicked off. OK, that’s good for Obama how?

Without new legislation, these provisions will automatically go into effect on January 1 or 2, 2013, except for the Alternative Minimum Tax growth, which may be changed retroactively. Some provisions will increase taxes (the expiration of the Bush and FICA payroll tax cuts and the new Affordable Care tax and AMT thresholds) while others will reduce spending (sequestration, expiration of unemployment benefits and implementation of the Medicare SGR).

So we’ve got all of 2 months. During holiday season?

Frankly, were I running the Republicans, I’d propose a couple of perfectly reasonable alternatives, and let Obama and the Democrats shout them down, and let things slowly go into effect.

Regularly remind folks that had they voted for Republicans none of this would have happened, as your plan clearly says so.

As the taxes hit folks, remind them that YOU are the party of lower taxes.

In the intervening couple of years, at least you have a modest spending restraint and lower borrowing / deficit for the future.

What About The Recession?

We’ve had them before, we’ll have them again. It would pretty much show that Obamanomics wasn’t very good at fixing things.

When the folks scream, point out “He Won, talk to him.”… and remind them of your proposals that would have avoided this. Remember that you can make your proposal as attractive to voters as you like. Since the Democrats will NEVER let it happen, make it a political wish list and advertise it. Free puppies and ice cream for everyone, you name it. Make the discussion about the Obama reality vs your ‘vision’ of rainbows and ice cream…

Frankly, having the next 2 years of recession would likely be worth it for the mid-term chastening.

Could it ‘backfire’ on Republicans? I’m sure the Democrats would try to paint it that way. However just pointing out that the deficit spending rate is down, the tax rates are now more in line with Democrat desires, and asking “Would you rather have the higher taxes AND the deficit?” ought to cover it.

Frankly, the major downside I see is just that the Bush Tax Cuts go away. More taxes will always be spent. It is, in essence, an admission that attempting to cut spending via income reduction was just ignored by both Republicans AND Democrats who ran out and spent anyway. As that is a fact, having that spending recognized in politically unpopular taxes instead of easier to hide borrowing seems like the better choice. It is unlikely ether that the tax cuts can be preserved, or that they could ever be restored in the future, so letting them go is a bother; but likely better than more Chinese Credit Card.

So tax everyone and everything. Tax them until they scream and bleed. Maybe then folks will realize that smaller government is a better choice… and vote for it.

In short, looking at the Fiscal Cliff, and the history of what the last 20 years of politicians have done to the economy and spending, it looks like choosing to just let the sequestration happen is a better choice than trusting the politicians to fix anything.

A technical managerial sort interested in things from Stonehenge to computer science. My present "hot buttons' are the mythology of Climate Change and ancient metrology; but things change...
View all posts by E.M.Smith →
This entry was posted in Economics - Trading - and Money, Political Current Events and tagged Democrats, economics, Fiscal Cliff, Republicans. Bookmark the permalink.

52 Responses to Throw Obama Off The Fiscal Cliff