An interesting view on Hurricanes 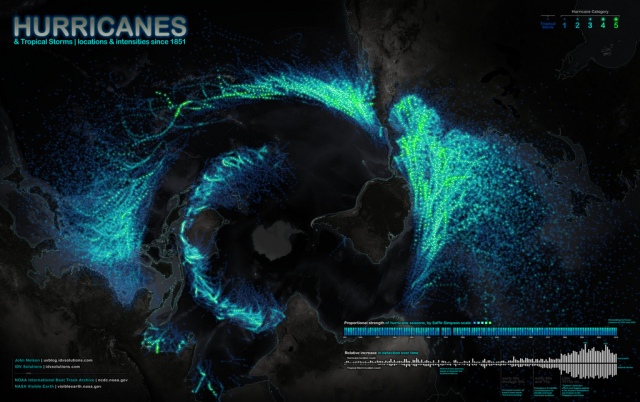 Original and several other sizes

I find this a fascinating picture. It says something about the physics of the land and air. I’m not sure what though ;-)

I tracked it down from this site:

that includes a Mercator like projection and a graph of N/S and E/W disparity.

Looks like Panama rarely / never gets a direct hurricane hit…

I find it fascinating that South America gets a ‘pass’ on hurricanes. Perhaps as cold water flows up from the Antarctic there. I suspect the large shallow semi-trapped nature of the Gulf of Mexico is important to the North American numbers, and that overall the tendency for the Southern Ocean to be able to conduct heat to the south pole helps dump the energy without hurricanes (while the N. Oceans can’t get to the pole as well, so more must be dumped via vertical cyclone processes).

So we have a warm “Gulf Stream” while there’s less such warmth in the south?

It’s an interesting picture, even if a bit more mystery than enlightenment for me…

A technical managerial sort interested in things from Stonehenge to computer science. My present "hot buttons' are the mythology of Climate Change and ancient metrology; but things change...
View all posts by E.M.Smith →
This entry was posted in Science Bits and tagged Hurricane, Picture, weather. Bookmark the permalink.

9 Responses to An interesting view on Hurricanes