We’ve, most all of us, seen that chart before. I’d like to add a bit of context to it. Notice that the major CO2 band is already “pegged” at the top. Notice that it overlaps, a lot, with water. Here is the same graph with a rectangular hole laid over that center band. Why? Because it, being already plugged, can’t get more plugged. So any added effect from CO2 must come outside that center.

OK, now notice that on the right side of that “window”, water is already nearly dominant. Not going to pick up much there. In fact, you can look at any of the CO2 “nodes” and they are pretty much already saturated and, other than some broadening, are not going to add any real obstruction. Yet broadening doesn’t add much either. One kind, pressure broadening, happens due to higher air pressure. As that happens at the deep atmosphere, infrared doesn’t get very far anyway. The effect higher in the atmosphere is reduced. The higher you go, the less the effect. So even here we have a bit of a conundrum. As you rise up the air column, to the top of the trophsphere, that CO2 band doesn’t broaden, it narrows..

Next, look at the water band.
Notice how many lobes it has that are shared with nothing else?

Where heat input is large, we get thunderstorms and clouds. Sunlight is kept out, while the vertical water flow pumps heat to the top of the troposhere, and into the bottom of the stratosphere. ( Called “overshoot” and “anvil clouds” or “thunder heads”). More tropical heat just pumps more water around the cycle to precipitate and moves more heat to the bottom of the radiative stratospheric zone. Heck, much of the topics is already at 100% humidity in the summer, it is NOT going to be getting more humid. At the arctic and antarctic zones, it’s frozen. Not going to get more humidity out of frozen air. During the winter, especially, it’s just bone dry and dead cold. No, the only time there’s any hope of “added humidity” is during the end of fall and the start of spring. In the middle band of latitudes, the air masses swing back and forth. Summers are hot and humid in the midwest. Like the Equatorial tropics, not going to be more than 100% and summer rains. In the winter, it’s frozen like the arctic. (Often an arctic ‘air blob’ runs down over the place. These come in many kinds and names. Leroux called some of them Mobile Polar Highs. I use a more generic term for all arctic air masses.) Again, the only ‘opportunity’ for more humidity comes in those shoulder months. In desert areas there just isn’t a lot of humidity anyway. Sometimes it rains, but inside a few days that air is long gone (and any moisture with it).

In short, there just are not a lot of places where a ‘water positive feedback’ can happen. And, in fact, it has not been observed. The lack of ‘feedback’ is yet another embarrassment to the IPCC forecasts / predictions / projections / hand waving / whatever they are calling it these days.

From this chart (which is an average, BTW) it is absolutely clear that water vapor is THE dominant IR radiative / absorptive gas.

Yet my complaints about this graph are not done.

Do you see any allowance for a -20 C polar temperature? For a polar vortex sucking frozen, dry, stratospheric air to ground level? How about for the desert areas that cover the middle parts of the US Southwest, Africa, The Middle East, China? Or in the south the Australian Outback, Namibia, Chile? Do you see any recognition of seasonal change?

This picture gives you an idea just how non-regular the atmospheric water vapor cover can be. 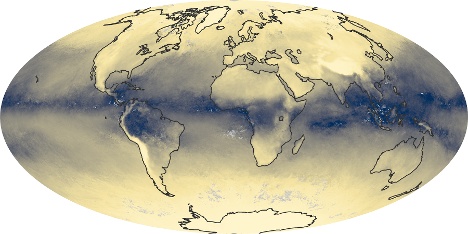 From the animation here:

To me, it looks like the polar regions are pretty much dry, the equator / tropics saturated, and only in between do things have gradation. Yet if you ‘watch the movie’, that moves with the seasons. I don’t see the tropics spreading out to cover a wider band (but the animation is short). I think it also shows just how much drying of the air can happen over land in the winter (and why the windshield forms ice).

What is missing is simply a recognition that the graph changes by latitude, season, distance from the oceans, land form, local winds, altitude. It also changes with the weather. We are already in a warm regime. Places that CAN get high humidity already HAVE high humidity. But in a turn to the cold side, what do we find in the historical record? Droughts. LOWER humidity.

We have records of killer drought in places like Egypt and Syria / Iraq (Mesopotamia). We have records of a very strong drought cycle in the American West. During the cold ’70s, California had a particularly noticeable drought. I was trying to learn how to ski then, and got to shuffle my skis over hay and straw covering the bare patches at Squaw Valley. A place that had been a host site for the Winter Olympics in the past, known for fairly reliable snow. You can see that on this chart of snow in North America and at a location on the way to Squaw Valley.

During the hotter mid-90s snow pack was up. During the colder mid-70s snow pack was down. (Look at where lines are not on each side, where there’s a bit of weakness or ‘gap’ on one side of the center bar. Notice, too, that we had little snow in the mid 2000s and then slowly rose a bit as this solar cycle peaked.)

As this is just one spot, it’s harder to see trends, but look at the darker blue lines. See that ‘way low’ in 1976 and 1977? That’s when I was learning to ski… Lucky me… You can also see that the ’20s are relatively low and the ’30s relatively high while the mid-90s are also relatively high. (IMHO you can also tease out some ‘transition artifacts’ in that the times of shifting from warm to cold – or from cold to warm – often look to have a high snow spike, until things readjust. Yes, all of it would be better handled with some math and smoothing, but ‘by eye’ is what I have right now.)

So what’s my point about all this? Pretty simple. Water vapor is already high. During the Holocene, we pretty much limit on high water vapor. More water in the air just comes down as more rain and snow. To the cold side we have plenty of room to lose water vapor. As the sun has gone quiet, the polar regions have gone back to damn cold. That means damn dry, too. In the midwest of North America, we had a drought. That’s dry. That’s lower water vapor. As we go colder and dryer, even just in regions like the Arctic or Canada or the UK and Scandinavia, we lose water vapor from the air.

While we can’t close the already closed CO2 window very much more (more like putting a bit of caulking on a double pane window), we can easily swing wide those water windows. It happens every winter in cold places. We get “hard frosts” and ice on the windshield of the car. It happens every night in the desert, when the place cools dramatically after sundown.

CO2 is powerless to prevent frost and cold desert nights because it doesn’t cover those windows. It is no protection against downside cold. It can not keep away the next ice age glacial. It can’t even keep winter frost off the windshield.

Now look again at this close up of what added CO2 is expected to do. Note the Watts listed for that change. Then look back up at those ‘water windows’. I think they are a whole lot more Watts…

I would very much like to see that same graph, but for above 80 degrees N and S (polar) in winter, and for over both the desert, and the US West during a drought (vs normal rains).

Without that direct comparison, this must remain just a speculation; but it is a well guided one, IMHO.

In any case, what we have here in this transmissivity graph is another example of an over averaged set of data used in a static scored model of how the world works. I think that looking specifically for those two “reasoning faults” in what is presented by the { Global Warming / Climate Change / Climate Chaos / Weather Weirding / Whatever-the-nom-du-jour is these days } folks stuff will be highly productive.

If they can’t even visualize water vapor right, there’s no hope for any of the rest of it being right.

As a ‘dig here’, it will be interesting to see if during any known historical very cold periods, there were also records of drought over some large areas. Basically, when Europe was having cold rains at the onset of the Little Ice Age, was North America having a drought? How about Africa? Asia? Separating the local effects from the “global trends”, if you will. Did the LIA start off with a wet / snow event, then end up more dry later? What are the temporal and spacial patterns of drought in a Little Ice Age? If anyone wants to ‘run ahead’ and let us all know… ;-)

In any case, I’ve reached the conclusion that while looking at temperature records is interesting, looking at precipitation and humidity trends is important too.

Finally, the air is dryer the higher up you go. I can only wonder to what extent the ‘solar funk’ and the shortening of the atmospheric column with it, has put more mountain tops and high plains effectively ‘closer to space’ and in a lower humidity regime. To what extent does UV mediated changes of air column height, modulate global high spot humidity. If it’s more than 3/1400 or so, then it is a candidate for overwhelming CO2.

We live on a ‘water world’, and that one fact matters more than anything else.

A technical managerial sort interested in things from Stonehenge to computer science. My present "hot buttons' are the mythology of Climate Change and ancient metrology; but things change...
View all posts by E.M.Smith →
This entry was posted in AGW Science and Background and tagged AGW, CO2, Global Warming, humidity, water. Bookmark the permalink.