This graph from TheInconvenientSkeptic bothers me.

It bothers me because of what it says.

What it says, by two different modes of reading, is that we have no business being warm right now…

OK, I spend a lot of time looking at graphs trying to predict what behaviour comes next out of chaotic time series. Seeing what is a valid leading indicator, and what’s a bogus one. Seeing when there’s a ‘disconnect’ and figuring out what is likely to come next.

So here we have a nice smooth W/m^2 ‘up north’ graph. It has that nice shape because that’s what the orbital mechanics do to the sunshine ‘up north’. See this graph, the black line. It’s basically that last little ‘wobble up’ before the vertical line of where we are now: 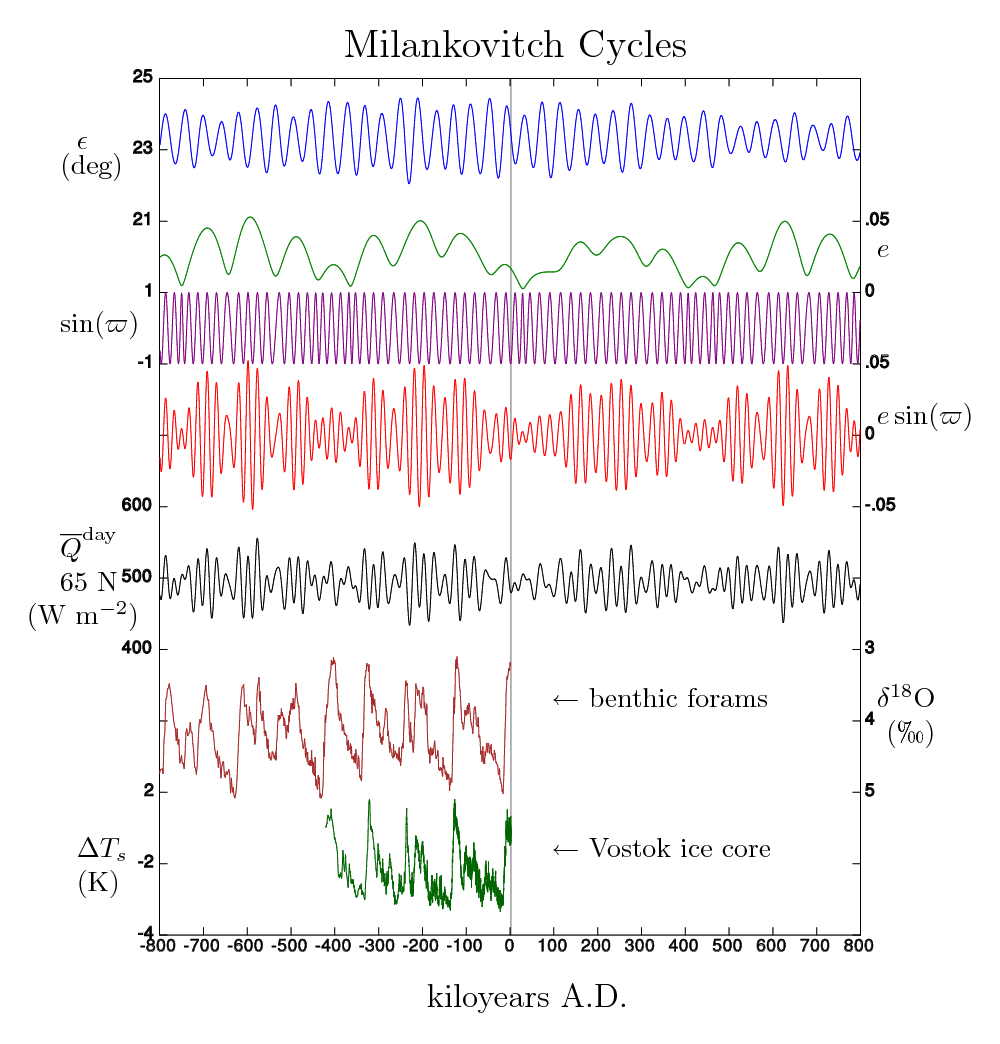 Both the Greenland and the Antarctica temperatures are lower than their peaks. They are generally trending downward overall. Antarctica in particular lead on the way up, and is lower than Greenland now. Furthermore, we know that right now ice is accumulating in Antarctica. Greenland is the tail on the Antarctic dog… And our W/m2 line is continuing in a decent downward slope. Harder to see in that Milankovitch Cycles composite graph. ( Inspecting it, I was hoping we were already AT the bottom. We are not.) So we have a bit more drop in W/m2 before we start back up, and we are below the energy level that pulls us out of a glacial, once one begins.

All in all, this graph tells me that we are on the knife edge of a drop into a cold stage and acceleration into a glacial stage, from which we can not recover. (This is, in some ways, just a confirmation of the 416 W/m2 or so number from prior plunges – but on a graph showing that our drop in W/m2 is not yet done dropping.)

So if we are very lucky, and do not have a major volcanic event, nor have a nuclear winter, nor have a rock fall from space in size, nor any other cooling event that causes multi-year ice to start collecting near the north pole, we can maybe stay warm. But if an ‘aw shit’ happens, we fall into a non-recoverable decent into the next glacial. We can only exit a glacial when there is sufficient energy to prevent multiyear ice from accumulating at the North Pole. We are presently out of that realm for a large ice pack. Essentially, once the Arctic freezes and does not melt for a few years, we’re done.

(This is a live map from: http://weather.unisys.com/surface/sfc_daily.php?plot=ssa&inv=0&t=cur so will change over time.)

That cold water is about to make the Arctic colder, right as the sun has reduced heating and ice is forming earlier and stronger than the last several years.

One can only hope that the present Solar Grand Minimum is not sufficient cause.

“But hope is not a strategy. -E.M.Smith”

It looks like, during a very cold glacial, CO2 levels plunge to plant starvation levels and plants don’t grow as well…

Atmospheric CO2 concentration ranged between 180 and 220 ppm. […] indicating that glacial trees were undergoing carbon starvation.[…] we found evidence that C3 primary productivity was greatly diminished in southern California during the last glacial period.

So once it gets very cold, and the cold rain / arctic snow CO2 scrubbers kick in, the food production gets cut too. Along with the fire wood.

A technical managerial sort interested in things from Stonehenge to computer science. My present "hot buttons' are the mythology of Climate Change and ancient metrology; but things change...
View all posts by E.M.Smith →
This entry was posted in AGW Science and Background and tagged AGW, Glacial, Global Warming, Ice Age, Watts. Bookmark the permalink.