Is there A sea level?

Folks who have been following for a while will know that one of my occasional complaints is about “over averaging”. It is a very common technique to average a bunch of stuff together and claim that the average reveals some new thing. That is rarely the case.

Let that soak in a minute.

It can be very useful to hide something. It can even sometimes let you highlight some aspect of the data that is harder to see with all the ‘noisy bits’ in the way. (The information was always there, and visible, but averaging can remove the variation and let the pattern of trend over time be simplified). So take the “Simple Moving Average”. Say we have a stock price. We average it over 20 periods. We get $50 as the SMA right now. Next period we add one price to the ‘now’ end and drop one price from the ‘then’ end. What you end up with is a low volatility line that wiggles a bit, but the wiggles are lagged in time by 20 periods from reality. We see the longer term trend a bit more clearly, but it hides both the range of volatility AND the present trend. (It will take at least 11 periods for the ‘new’ data to dominate the 20 period average and shift the trend definitively.)

They all give an average of 15. A 10 period SMA of them will have one data point of 15. They will all have the same ‘trend’ (none). Hidden are the dispersion of the first series, the dead flat of the second, and the hard drop of the last. (One could make a similar raising then falling trend line with acceleration that also had a 15 average).

So that’s why I’m always a bit “suspect” of anything that uses “averages”. I’m always wondering “What are they hiding?” since the purpose of an average is to remove something from the visible (supposedly so that something else is more visible… and it isn’t as clear that all three of those series are “15” over the times involved if you do not average them out… though I’m not sure what merit it brings to understanding their relative ‘trends’…)

What we call “Sea Level” is the MEAN Sea Level. It is an average taken from a bunch of places around the planet and averaged.

So for that one place, there is no one ‘sea level’. There are many constantly changing, often cyclical, but not neatly repeating sea levels. It may be useful to say that the “mean sea level” is that spot about 3 meters below high tide, but it does not help me stay dry should I go stand there. Actual sea level cares not much at all about the average of changes.

At present, we use satellites to make a topo map of the ocean and calculate some kind of mean elevation. In the past, we used tide gauges at selected places. In the ancient past? Well, for that we use geological features. Where has their been wave cutting of shore rocks? What do sediments say about rates of water flow and depth?

But those physical measures are all “point measures”. There is NO “mean sea level” gauge. It is an artificial created thing from averaging together many of those very different things.

Yet on very long time scales, geology causes the height of the land to change by distances of many meters. (It can, and has, moved up or down by several meters in just one earthquake at many places around the globe, in a matter of moments.) So on longer time scales, we have to deal with the fact that the earth itself is bucking, bending, rising and heaving, subducting and falling. There are massive tonnages of sediment being washed into the oceans and filling them up from the bottoms. (A whole Grand Canyon full just off the coast of Mexico…)

So in reality, there is no one true ‘sea level’. There can not be. Averaging many measurements of different sea levels at different places and times gives an interesting number, but one that hides more than it reveals.

For example, this chart: 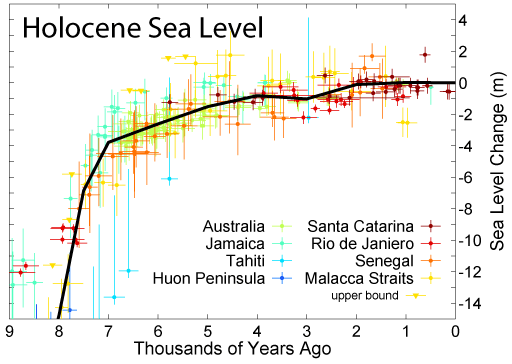 Makes it look like a long fast rise turned into a shallower rise then essentially halted about 2000 years ago. But look at those colored ‘stars’ of data. They are scattered on both sides over a long time. Wide error bands each, and wide dispersion between them. Is there really ANY reason to think that sea level was static for those 2000 years? We have plenty of geological evidence for local places with non-static sea level. Ancient ports found inland today, for example.

So I had gone looking for some indication that sea level had been a bit higher in the relative historic past. ( On “The Documentary Channel” they had a show on a new timeline for Ancient Egypt and showed a map with some of Egypt and Saudi Arabia flooded and I wanted to find when that might have been, it being ‘unfamiliar’…)

I ran smack into that graph above, and then a load of ‘global warming’ crap about how we were all drowning (despite no detectable ocean rise, and even a recent drop…) Finally, I ran into a couple of interesting history stories. At the end of it all, I was reminded that all sea level is local and nobody has the average sea level.

The actual paper is hidden, but the abstract says:

A re-analysis of sea-level data from eastern Australia based on 115 calibrated C-14 ages is used to constrain the origin, timing and magnitude of sea-level change over the last 7000 years. We demonstrate that the Holocene sea-level highstand of +1.0–1.5 m was reached ~7000 cal yr BP and fell to its present position after 2000 yr BP. These findings are in contrast to most previous studies that relied on smaller datasets and did not include the now common conversion of conventional C-14 ages to calendar years. During this ~5000 year period of high sea level, growth hiatuses in oyster beds and tubeworms and lower elevations of coral microatolls are interpreted to represent short-lived oscillations in sea-level of up to 1 m during two intervals, beginning c. 4800 and 3000 cal yr BP. The rates of sea level rise and fall (1–2 mm yr-1) during these centennial-scale oscillations are comparable with current rates of sea-level rise. The origin of the oscillations is enigmatic but most likely the result of oceanographic and climatic changes, including wind strengths, ice ablation, and melt-water contributions of both Greenland and Antarctic ice sheets.

Oh, and they have no idea why, but will trot out the list of ‘usual suspects’ anyway. I note in passing that geology and lunar / tidal are NOT on their list…

Meanwhile, over in Israel…

Archaeological, fluvial and morphological features are used to reconstruct sea-level changes and landscape evolution on the northern Carmel coast, Israel during the Holocene. Between 8900 BP and 7000 BP1 sea level lay between 35 m and 7 m below present, rising at an average rate of 12-14 mm/yr. This rate decreased to 2-4 mm/yr between 7000 BP and 4000 BP, with the sea between –7 m and present MSL. Since the Middle Bronze Age (4000 BP), sea level has been within ± 0.5 m. The landscape has evolved in five main stages, linked to the Holocene marine transgression and changes in the fluvial water regime. (1) Around 8900 BP, sea level lay around –35 m. The southern coastline between N. Megadim and N. Maharal was straight and sandy. North of N. Oren, the coastline was mostly rocky, with marshy clays embedded in the troughs between the coastal kurkar ridges. All southern wadis, from N. Megadim to N. Maharal, crossed the Carmel coast kurkar ridge through the N. Oren canyon. The northern wadis from N. Mitleh to N. Ahuza were blocked and flowed northward, crossing the Carmel coast ridge westward through N. Ovadia channel and at Kfar Samir. (2) Between 8200 BP and 7500 BP, sea level lay around –16 m. North of N. Oren the coastline was extensively indented, creating lagoons and shallow bays. To the south, the coast was straight and sandy. Alluvial sediments filled the eastern trough and water overflow allowed streams to flow directly to the sea. (3) Between 7000 BP and 6500 BP, the sea was around 9 m below present. A row of offshore islands was situated parallel to the coast from Atlit northward. (4) During the Chalcolithic period (6000-5700 BP) sand dune barriers interrupted natural drainage and a series of polyhaline lagoons was formed. (5) Between 5700 and the Middle Bronze Age, sea level has risen to its present position.

Which also implies it hasn’t changed much since the Middle Bronze Age. But notice how different those sea levels are from the Australian ones?!

7 meters difference for 7000 BP. And someone wants me to get worked up over a few millimeters?

Not a ‘scientific paper’, but interesting all the same. This article has another view of sea level changes. While it cries out for more of a ‘Dig Here!’ to get the papers behind it, turns out I have a fever/cold right now and mostly just feel like sleeping… so I will… which means someone else will need to do that digging while I explore hot tea, warm blankets, and cool clear water…

From India, a historical perspective:

LUCKNOW: Oceanographic experts advise that human settlements should be at least 500 metres to one km away from the seashore in India because besides tsunamis, rise in sea level also poses a threat. Or else what happened to Dwarka, which mythology says was founded by Lord Krishna, and now submerged in the Bay of Kutch, may happen to present settlements on shorelines. These predictions are not based on any mythological statement, but on scientific facts derived after studying 15,000-year-old microfossils found in oceans.

Was it a tsunami which hit the Dwarka? “No”, said Rajiv Nigam, who is head of the geological oceanography division, National Institute of Oceanography, Goa. “Evidences are that a tusmani hit the western coast of India about 8000 years before present (BP), but Dwarka submerged due to rise in the sea level. Nigam has done extensive research on depth fluctuations along Indian coasts. He was in department of geology, Lucknow University, to deliver the MR Sahni Memorial Lecture.

Nigam explained that mythology says that Lord Krishna constructed Dwarka after snatching land from the sea. But as per science constructions can be on a land reclaimed from sea. However, when sea level rises, these settlements are first to get submerged. Dwarka submerged due to rise in sea level 3500 years BP.

He has also used marine archaeological studies to resolve a three-decade long controversy of Harappan settlement in Lothal, Gujrat. He recovered foraminiferal micro fossils, around 4500 years old from the site, which established that sea water once flowed in Lothal and there also existed a dockyard.

So what SUV and coal fired power plants caused it to be so high back then? Eh?

I have no idea if that bit of history is due to global shifts of ‘sea level’ or local geology shifts. Nor does anyone else. That there are similar dated ports and harbors in Turkey and Italy, now found well inland, implies to me that ‘sea level’ was higher, and has been dropping, and that any recent ‘rise’ is likely just due to a normal cycle of rise / fall on a 1000 to 2000 year basis.

A technical managerial sort interested in things from Stonehenge to computer science. My present "hot buttons' are the mythology of Climate Change and ancient metrology; but things change...
View all posts by E.M.Smith →
This entry was posted in AGW Climate Perspective, History and tagged Averages, history, Sea Level. Bookmark the permalink.

13 Responses to Is there A sea level?