Original from this site:

There are several interesting things about this chart. The first one is just that at the “2000” point (now) we have summer (the red line) having gotten steadily longer in the N. Hemisphere while winter ( blue line) is steadily shorter. Think that might, just maybe, have something to do with the N. Hemisphere getting warmer? Looks to me like about one whole day more summer and one whole day less winter since the birth of Christ. This trend continues (if very very slowly) for the next 2000 years. (At which time we have 94 days of summer (instead of about 93.5 today) and 88.75 days of winter ( instead of about 89 today).

Somehow “I think that matters”.

So we have the South Pole staying really nice and cold while the North Pole is cooking a few extra days and getting snow a few less. And we’re surprised the North Pole isn’t freezing up as much as the south?

Much further forward, our seasons become nearly equal again. As we can stay out of an ice age glacial only as long as the North Pole gets excess warming from longer summers, this says we eventually freeze up. While our present insolation 65 North is below the self melting range, and in a ‘metastable’ range of 428 W/m^2; we ARE above the “guaranteed to enter a glacial” rate of 416 W/m^2 (so we just need to avoid a sharp surprise downturn). Details here:

So this implies, strongly, that if we can just avoid some kind of surprise “big cold swing” (think “big rock from space” or “big ass volcano” or possibly “Maunder Minimum and Gulf Stream takes a break”…) we’ve got about 9,000 years before we are back at real risk of a guaranteed plunge into a glacial. Unfortunately, there are a couple of other factors that come into it, including axial tilt, that are pushing the other way. But still, it is very nice to have a ‘big one’ in our corner.

FWIW, having the seasons be ‘equal length’ in about 20,000 years is “not good”. When summer is not extra long and seasons are equal length, we cannot get out of a glacial once one starts. In fact, from about 9000 AD to 20,000 AD, any “cold bump” and we are pretty much glaciating. That big summer peak length in about 18,000 BC is the only reason we left the glacial in the first place. That extreme extra summer / short winter; that is the only case when you can melt the ice at the north pole and exit a glacial. That time is past and does not return for about 100,000 years. So it’s pretty much guaranteed we have a new glacial by that 30,000 AD equal seasons point, and then can’t get out of it for another 70,000. All we are arguing about, really, is how soon the ice comes and doesn’t leave “up north”. Our present insolation levels would allow that to happen right now. We are “whistling past the grave yard” as it is. But it is very comforting to see some ‘longer summers’ on the cards for the next few thousand years as a bit of help keeping the ice away. 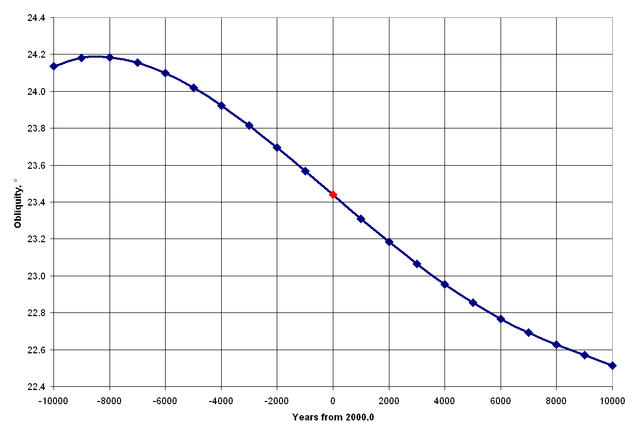 Obliquity (tilt) graph for the Earth

Down in comments I do some “hand waving” about this graph and it becomes much more clear what I’m talking about if you have the graph to look at. We are going to less obliquity, so less summer warming when the North Pole is pointed AT the sun as it is pointed less. We are about 1/2 way to the minimum. We only exit a glacial when at the Maximum AND summer happens when we are furthest from the sun (as that part of the orbit takes longer, so we get longer summers) AND the orbit of the earth is more elliptical (so the added days of summer are the most they can be). The orbit is becoming LESS elliptical (more circular) at the same time that the tilt is becoming less. So now you can see both of them on the graphs. But we do get one “last hurrah” of longer summers for the next couple of thousand years. The swing from longer to shorter summers happens as precession of the perihelion moves into / out of the summer season. (Chandler wobble enters into it too…) So the “fast” cycling is perihelion precession, the longer change of envelope is due to changes of eccentricity of the orbit, and we then have to add in the generally cooler or warmer summers as the tilt changes.

A technical managerial sort interested in things from Stonehenge to computer science. My present "hot buttons' are the mythology of Climate Change and ancient metrology; but things change...
View all posts by E.M.Smith →
This entry was posted in AGW Climate Perspective and tagged Glacial, Ice Age, orbit, Summer, Winter. Bookmark the permalink.