OK, I was reading this article at WUWT:

And it links to an interesting place to get snow maps:

Which also has some animations over a period of days, if you like.

Along the way, I got to looking at some of those images of snow and cold and white. Yes, it is winter, but an awful lot of the USA is covered in snow. And snow is simply not warm. This is not a ‘warm snow’. 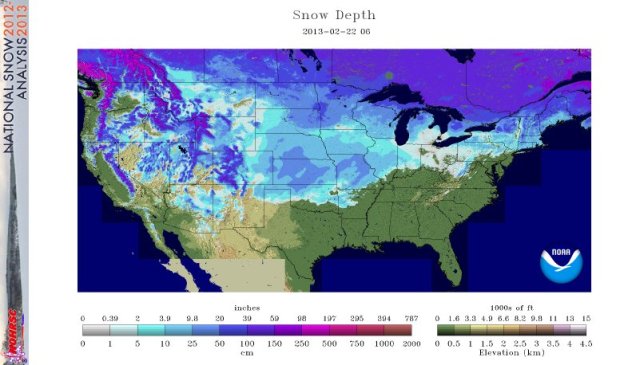 That’s the depth, but the temperature is not particularly warm either: 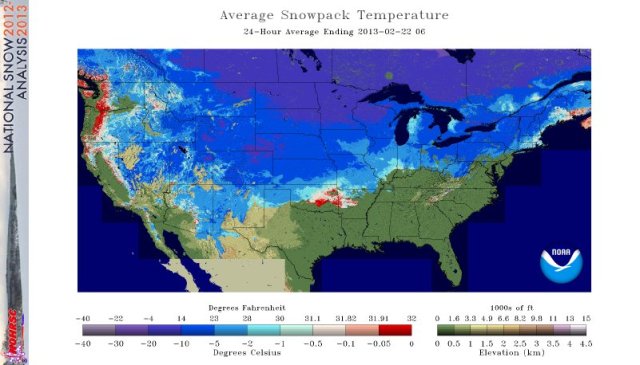 They also show where it was falling on that day:

You can pick particular dates (inside an unknown range) directly in the URL like this:

All in all, an interesting place to see the snow and poke around in it from the warmth of your living room.

The nice thing about that one is that it shows the ‘normal’ as a thick line. Lately we’ve been ‘snowing outside the lines’, but it does change from week to week.

Oh, and a h/t to Tim Clark for asking about ‘where to get snow maps’ and getting me thinking about it…

Also a h/t to Crosspatch in T10 who pointed at the cold in Russia and what is likely to come:

Models are currently calling for the possibility of snow in Florida next Sunday / Monday with snow as far as Gainsville and freeze to Orlando. Some interesting experiences coming up for spring break.

Though there seems to be much confusion about that Russian cold temp, exactly when, and what, and where… it is pretty clear that this snow all over the world is not a “warm snow”. It isn’t caused by warming. It doesn’t bring warming. It’s just darned cold.

IMHO the proper thing to do when someone claims the snow is due to Climate Change / Climate Weirding / Extreme Weather Events / whatever… is just to say “You mean Global Warming is really cold?” and then laugh at them.

We’ve reached the land of “not just wrong, obviously and insanely wrong” for the Global Warmers. This weather is NOT warm. It isn’t even close to warm. It is clearly a very cold turn, much like during the last “Major Solar Minimum” events and it clearly shows that something in the absolutely normal cycles of solar and lunar / tidal processes is in control of our weather. Not CO2.

It’s time for the “Global Warming” crowd to recognize that their Emperors have no clothes and their story is looking very dumb.

We are headed for about 15 to 20 more years of this, and getting worse / colder along the way. The Fat Lady is warming up off stage right, and there’s a cold wind a gonna blow…

It will be particularly interesting to watch how China responds as they tend to food shortages and severe freezes / droughts in such times, and how North Korea reacts; possessing nukes and with near starvation crop yields already, and getting more frozen by the year. We’ve got a ‘race condition’ between North Korea and Iran as to which fool will become a Nuclear Fool first, and who will pound them into dust. Now this weather excursion (and it is weather… 30 year weather cycles and even 180 year solar driven weather cycles are NOT climate, they are weather) is going to be stressing exactly the wrong folks in the most trying way. We will be very lucky if they do not decide to do something very very stupid. I don’t believe in luck…

At the same time, our European and US “leaders” are about as ill equipped to deal with any of this as any ‘leadership’ I’ve seen since Ronald Reagan tossed Jimmy Carter out on his butt. I can only hope that things hold together for 4 more years and we get a change of our political class for someone a bit more wise in the ways of global catastrophe and resource wars. Not having a tin ear to rampant ideologue driven rabble rousing would help too…

BTW, note that on that snow depth map, we’ve got snow in Southern California and in New Mexico / Arizona down to the Mexican border. Also note how the mountains are all getting good snows. IMHO it’s all about the UV for mountain snow. When the UV went ‘way low’ the atmospheric height shortened. We have the same amount of air, but the thing just squashed down. Less UV making it less puffy…

That is, in effect, the same as making all those mountain ranges taller. That ought to lower the ‘snow line’. I expect we will see lots more growing glaciers in the coming years. Mount Hamilton, near me, was covered in snow to a ‘lower than usual’ level just last week. Yes, it melted off. But during the 90s it had become rare to see snow on the mountain at all in some winters. Now we are getting it several times each winter. Like “the old days” of the ’70s. Or perhaps a bit more.

It is my opinion that if we can keep an eye on snow levels and glaciers, they will pretty much show that the worm has turned. We will likely see that effect most strongly in the Andes in South America. They are very high, and can be very cold. Also the Southern Hemisphere winters are getting longer while their summers are getting shorter due to orbital changes. Combine all that, and I think South America will show us dramatic cold mountains before most other places. ( I really need to find a good source for South America snow maps.)

One thing is very certain, though: I’m really glad to be living in California today: I did an open air BBQ on the patio. Nice spring like day. Shirt sleeve weather. Despite all the “stupids” running our government and driving our economy into the ground, the place does have its charms. February BBQ is one of them ;-)

I hope to get the patio cleaned up and set up enough to do several more, but there is always the risk, up until about mid April, of more storms and rain; potentially even a freeze. (Our official ‘last frost’ date is about then). Still, on any given week it can be a BBQ Weekend, any time of the year. I have a ‘nesting pair’ of doves that have returned to the patio awning. I think we’re into this about 20 generations now (maybe more… they first moved in about the time my kids were born, so ‘over 20 but not more than 25’ years.) There’s something pleasant about having doves cooing in the yard, and doing a BBQ in February… Sometimes we have a very long spring. As a friend’s Minnesota Swedish Dad explained to him, when asked why he moved to California: “Son, you don’t have to shovel rain”. I can only add “or sunshine”…

So to all of you dealing with cold, frozen, and snow: Good luck, and hope you warm up soon. I can assure you there is still a sun in the sky, and spring is on the way. It’s just taking a bit of a visit to California until the snow gets done. ;-)

A technical managerial sort interested in things from Stonehenge to computer science. My present "hot buttons' are the mythology of Climate Change and ancient metrology; but things change...
View all posts by E.M.Smith →
This entry was posted in AGW and Weather News Events and tagged Global Warming, Snow, weather. Bookmark the permalink.