OK, I don’t have as many references for this as I’d like. I was only “half listening” to a ‘news’ story that went by on The Weather Channel. I didn’t catch the name of the presenter and have not found the exact ‘story’ on line, yet. If / when I find them, I’ll add links. (Others are encouraged to find them if they can…)

The basic story was about the ‘ozone hole’ over Antarctica. How it was making things all wrong in Antarctica and was tied in with extra cold vortex effects. All the usual Ozone Hole Tripe. No big… But…

At the end of the pitch, the presenter, who stressed he was on the South Shetland Islands in Antarctica, proceeded to state that it was “Warmer here, than in our”{something like a US city somewhere}. Obligatory penguins in the background of the shot. Basically asserting that due to the combined effects of global warming and the ozone hole Antarctica was warmer than northern US cities, but the Evil Ozone Hole was causing ice growth in some part of Antarctica far far away…

OK, the story came around again. A bit more detail this time. It was from “Kerry Sanders NBC Antarctica” if I copied the flash panel of attribution correctly. Likely why the ‘story’ isn’t on the WxChannel web site, it’s an NBC ‘pickup’. He starts with a discussion of how ice loss at the North Pole is due to global warming, but in Antarctica the story is more complex. Ice loss at places like the South Shetland Islands (where he is posed with penguins and bare rock) hurting Adele Penguins and with krill and phytoplankton levels down. (No mention of massive krill harvests to make animal feed…) Then a discussion of ice growing at Ross Sea due to… CFCs and ozone hole causing chilling effect and ice growth. So, you see, the ice loss is due to people and the ice gain is due to people and we are all evil… Extreme weather in US came along as a substory, then the “punch line”: Warmer here than in the “pick city” of the day. (So I’m now waiting for the ‘pick city’ story to come around to find out what city that is…)

No mention of the fact that it is peak summer in Antarctica, dead winter ‘up north’, and that the South Shetland Islands are off the end of the Antarctic Peninsula fairly close to South America.

The South Shetlands are those little green spots just at the North end of the Antarctic Peninsula. Closer to Chile than to the main body of Antarctica. (And in fact claimed by Chile). Almost on that circle of latitude at 60 South. Yes, 60 degrees South. 30 degrees away from the South Pole. The Shetland Islands (the ones north of England) are just about the same latitude North, on a line that goes through south Norway and south Sweden. (So would folks go to Scotland to make claims about the weather / climate in the Arctic?…) Note, too, that the South Shetland Islands are outside the Antarctic Circle.

So they were ranting about how horrible the Ozone Hole was… OK… I went looking for the story on their web site. Found a story on the Antarctic Ozone Hole, but not the one I wanted. In it, it has a map of The Horrible Ozone Hole: 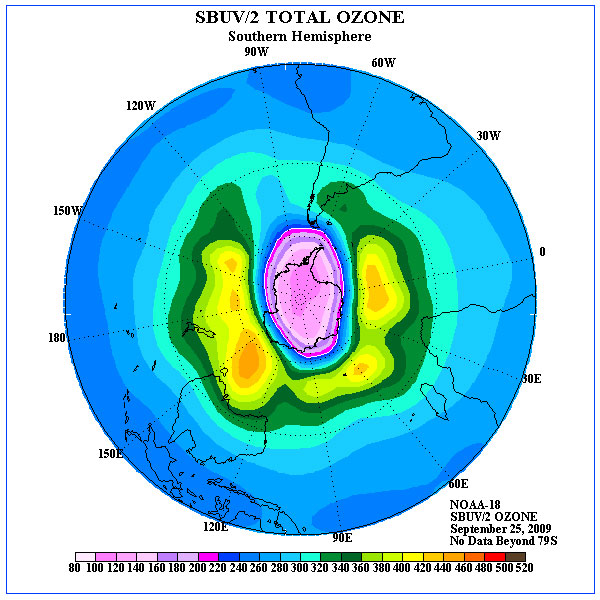 but… Notice that the date on the map is 2009. That’s a while ago. (Though, in fairness, that’s the date on the story). Now look in the lower right corner. It’s a NOAA map, and they play the “no data trick”. “No data Beyond 79S”. Well gee, isn’t that almost all that big purple “hole” splotch? 75 S on my globe runs just about the middle of the Ross Sea and just a bit under the point where the Antarctic Peninsula joins the main body of land.

80 S is the inner circle on this map(click for bigger version):

So most of the center of Antarctica is really “no data”. No Data? So what is that big blob of magenta? Is it the “no data” marker?…

For comparison, here are a couple of recent ozone anomaly maps for the world, and one ‘actual ozone’.

That was a couple of weeks ago. Here’s today:

First off, comparing those two, it is very clear that that ozone levels are very dynamic. Hardly “driven” by CFCs. Something else drives the ozone levels. (IMHO, the polar vortex that is itself driven by solar effects, and landing points of various particulate and charge currents from the sun.) Second, notice that there isn’t much of an ‘ozone hole’ at all. Supposedly at the strongest in Antarctic spring, but clearly wiped out with a bit of summer sun.

So Antarctic Ozone is about the same as the equatorial tropical ozone… Southern Ocean ozone about the same as North Atlantic ozone. All that ozone in the Arctic and over Canada and Siberia not doing much to keep things warm.

Very high ozone levels over the North Pole. Lowest levels in the ‘rain belt’ near, but not at, the equator. (So maybe we ought to be panicked about the “ozone hole” over Indonesia under the clouds and rain?…)

All in all that NBC / WxChannel ‘story’ looks like a flat out lie wrapped in a fib, topped with a whopper.

The “ozone hole” isn’t (at least not now). The cold and ice growth in Antarctica is NOT caused by the ozone. The descending strong polar vortex, driven by solar changes, drives both the ozone and the cold. During the winter, the solar radiation can’t make ozone, and during the summer it does. The balance between the vortex and the solar radiant energy / particle and charge flows combined determine the ozone levels. The vortex also drives the degree of cold weather at the poles, modulated by solar changes.

Were low ozone causing cold, the area from central Africa, to Central America, to Indonesia would be growing ice right now.

The South Shetlands are NOT inside the Antarctic Circle and using them as a proxy for Antarctic conditions is a flat out deception. They are a proxy for the northern edge of the Southern Ocean at best.

Ignoring massive industrial harvesting of krill in an attribution of krill reduction to weather is a deception by omission.

Just wrong and stupid on so many levels. The worst, of course, being to compare an island having long summer days to continental USA in mid winter. They have, in essence, discovered that summer is warmer than winter, but didn’t notice… Instead they find that South Shetland Islands in summer are warmer than the US “Pick City” in winter due to Global Warming…

A technical managerial sort interested in things from Stonehenge to computer science. My present "hot buttons' are the mythology of Climate Change and ancient metrology; but things change...
View all posts by E.M.Smith →
This entry was posted in AGW and Weather News Events and tagged Antarctica, Global Warming, ice, Ozone, Penguins, Snow. Bookmark the permalink.