There are some truly odd connections in life. One of them involves bicycles and ‘virility’.

For a long time I’d known that those tight spandex pants and ‘warmth’ tended to reduce fertility ( the “boys” need to be cooler than normal body temperature to work right… that’s why they are not ‘inside’ somewhere… anything that “keeps ’em warm” tends to be a contraceptive. Oddly, a tribe in some God Forsaken Place – I think it was back woods Amazon? – had discovered this, so all the guys would sit around the campfire giving the ‘dangley bits’ their own ‘hot tub’ time in cups of hot water. One wonders how they figured out ‘how long and how hot’…)

Then there’s that strange effect discovered in competitive bike riders… You know the ones, a 15 speed bike that has weight measured in ounces and a narrow “seat” that’s more like a fence top edge… Turns out they tend to put too much pressure right on the “plumbing” and tend to lead to nerve damage in the uh, um, just in the parts that, er, well, where you would really rather not have numbness and lack of sensation… So “Mr. Happy” can still get up, but you might not notice… Needless to say, some folks decided that trying to ‘look cool’ with racing seats was not as important to them. (Strange… just after that was ‘in the news’, the mountain biking fad took off with much larger seats…)

This isn’t about those. Those are “old news”. No, this is about something that was completely unexpected to me. Here, for decades, I’d cursed the “Bull Head Sticker” as I’d collect dozens of them in tires and feet. Sometimes resulting in the need to toss out the entire tire as not all the sticker ends could be found and removed. Once, at about 11 years old, my trusty old Schwinn 3 Speed (cost $56.50 and I washed dishes to pay for 1/2 of it. At 25 cents / hour in the family restaurant. Times were different then.) Well, that bike had collected a slow leak somewhere. After a few patches, it likely had a hidden sticker end that had punctured the tube and I needed to buy a tube and tire. But I didn’t have the money right then and resented it anyway.

Being a bit creative, and knowing about viscosity, I pondered: Could I fill the tire with something more viscous that would not leak out as fast? So I ended up running the hose over the hand pump while holding the bike up while running the pump while… An 11 year old can get creative with using legs, feet, arms, hands, knees… In the end, I slowly managed to pump my front tire full of water. There was an air bubble in the very top of the tire, but by the next day it leaked out and I ‘topped up’ with water. For the next couple of months, I road around on a tire full of water.

It worked FINE. A bit slower to get up to speed, but then you could coast a long ways ;-) It was also rather “stiff” in the turns. I got good at horsing it through the turns, but “fast changes” took more active engagement. OTOH, you could ride ‘hands free’ straight down the road with ease.

So I tell that story to let you know that when it comes to “Bullhead Stickers” and me; “we’ve met”. I’d always just thought of them as that crappy foreign weed that kills bike tires, fills shoe soles with stickers (that eventually work through thin rubber, hopefully about the time the shoes are wearing out). Were it in my power, I’d have made them extinct.

Little did I know.

While looking up some other, completely unrelated thing, about some plant or other, I ended up discovering that the plant has another reputed use.

Tribulus terrestris is a flowering plant in the family Zygophyllaceae, native to warm temperate and tropical regions of the Old World in southern Europe, southern Asia, throughout Africa, and Australia. It can thrive even in desert climates and poor soil. Like many weedy species, this plant has many common names, including bindii, bullhead, burra gokharu, caltrop, cat’s head, devil’s eyelashes, devil’s thorn, devil’s weed, goathead, puncturevine, and tackweed.

We always called it “bullhead stickers” or “puncturevine” (for obvious reasons). 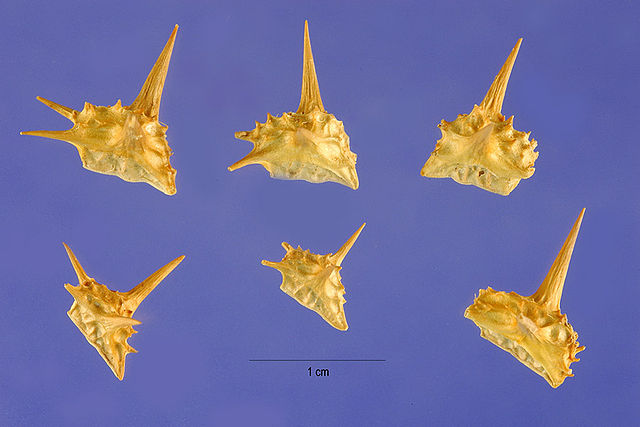 Some body builders use T. terrestris as post cycle therapy or “PCT”. After they have completed an anabolic-steroid cycle, they use it under the assumption that it will restore the body’s natural testosterone levels.

The extract is claimed to increase the body’s natural testosterone levels and thereby improve male sexual performance and help build muscle. Its purported muscle-building potential was popularized by American IFBB bodybuilding champion Jeffrey Petermann in the early 1970s. However, T. terrestris has failed to increase testosterone levels in controlled studies. It has also failed to demonstrate strength-enhancing properties – a finding indicating that the anabolic steroid effects of Tribulus terrestris may be untrue. Some users report an upset stomach, which can usually be counteracted by taking it with food.

So it may, or may not, have some kind of anabolic steroid effect. Who knew? (Or perhaps no one knows, as the controlled study said it failed).

Then again, it seems to do something for other animals, so maybe it’s a dose related thing…

T. terrestris has been shown to enhance sexual behavior in an animal model. It appears to do so by stimulating androgen receptors in the brain.T. terrestris is now being promoted as a booster for the purpose of increasing sex drive. Its use for this purpose originated from a Bulgarian study conducted in the 1970s, which found effects on free testosterone and luteinizing hormone in men belonging to infertile couples. A research review conducted in 2000 stated that the lack of data outside of this study prevents generalizing to healthy individuals

Animal studies in rats, rabbits and primates have demonstrated that administration of Tribulus terrestris extract can produce statistically significant increases in levels of testosterone, dihydrotestosterone and dehydroepiandrosterone, and produces effects suggestive of aphrodisiac activity. On the other hand, one recent study found that T. terrestris caused no increase in testosterone or LH in young men, and another found that a commercial supplement containing androstenedione and herbal extracts, including T. terrestris, was no more effective at raising testosterone levels than androstenedione alone.

There’s got to be a better way to find the stuff, but bike tires seem to find it in under an hour, if past experience is any guide.

Just make sure you pick all the ‘bullheads’ out before putting any in your salad.

So here we have a really odd case. Why in the world would bicycles so consistently have connections with virility, sterility, sexual dysfunction and now a connection to more function. (We won’t even mention Victorians and ‘women on bicycles’…)

I have no idea why. Yet there it is. Some cosmic connection causing these two subjects to circle about the same domain.

Unless it is just a statistical artifact.

One other odd connection of the Bullhead Sticker was a mention of use in a weapon. One of those “hyper testosterone driven war” things.

One can only speculate about “how”. Glued to a club? Stuck in a door mat for a midnight “knock and run”? The possibilities are large. And what is that other plant?

Acokanthera oppositifolia (syn. Toxicophlaea thunbergii Harv.) is a shrub used as the source of an arrow poison and to coat caltrops made from the sharp fruits of the puncture vine (Tribulus terrestris). All three plants of the genus Acokanthera contain toxic cardiac glycosides strong enough to cause death. This plant and other species of the genus are found in South Africa and Abyssinia.

Abyssinia? They couldn’t just say “Ethiopia”? But at least we find out ‘how’. “Caltrops”. Or giant stickers on the ground… Guess it pays to wear thick boots in Africa.

So how good is this poison?

Acokanthera is a genus of flowering plants in the family Apocynaceae. It comprises 5 species and is generally restricted to Africa, although Acokanthera schimperi also occurs in Yemen. Its sap contains the deadly cardiotoxic glycoside ouabain. The sap is among the most commonly used in arrow poisons, including those used for poaching elephant.

Well, at least we know why nobody bothers with “Gun Control” in Africa. Dip a bullhead sticker in juice of shrub and get a sling shot… Or just use a blow-dart. If it will down an elephant with an arrow, it’s pretty strong stuff.

I think I feel an exploration of “arrow poisons” coming on. There’s likely some that grow here in the Americas too.

Right after I get back from my bike ride…
;-)

40 Responses to Flat Tires and Testosterone