Shopping for A Dutch Oven and…

So after some “experiments” I decided that the “best short term fix” is to just bake bread in my Dutch Oven. I have a Lodge 12 inch that I bought a decade or so back and rarely used. (Turns out I’m the only one in my family who likes to go camping and I don’t need a 12 inch dutch oven for “just me”…)

OK I dug it out of the garage. One or two small rust spots. Washed off the dust, lint, and tiny bit of rust. Dried it. Found out a standard bread pan fits nicely inside (so I can make bread that fits in the toaster when sliced). Oiled it up with highly unsaturated oil, into the electric oven at 375 F (open windows to let smoke and smell out) and bake for 2 hours…

Along the way, realize that “Gee. If I’m going to fire this up to bake bread, I could just stack a smaller one or two on top to roast a chicken or make stew and vegetables…” So decide I want a smaller one or two to add to the stack. I’ll be using the same ‘brick base’ that I’m using for the POB BBQ and the G70 Stove to hold the bottom coals. Eventually I plan to put a ‘brick surround’ around the Dutch Oven so less coals cook the same temperature.

Initially, I found a nice site that listed approximate temperatures for a given number of coals:

A ring around the top and the bottom is about 325 to 350 degrees.
Remove every other briquette underneath to make 300 degrees.
Add a second ring to the top to make 375 degrees.

It lists several other methods as well, but that’s the one I’m starting with. As I want 325 F to 350 F, that “one ring” is very easy to remember. Adding a brick surround and finding out what coals to use then will come after I have mastered the first step…

As it is raining tonight, I’ll not be able to use it for a couple of days. Time for an “order” to arrive… So off I go to WalMart and Amazon to find price and shipping and all on smaller Dutch Ovens.

At Walmart, I found a brand that even as a notch in the edge that aligns with a matching notch in the lid for inserting a thermometer. I’m in heaven! I can actually know what the temperature is inside! So adding that brick surround need not be trial and error, it can be build and measure. (I eventually ordered a 6 qt one, and I’m pondering the 12 quart… but it’s large enough for small turkeys so maybe not best for my first trials.. even if it is only $58 at the moment.)

But before buying, I figure I ought to check The Competition…

So I’m at Amazon and, well, the Dutch Oven isn’t quite what I was looking for, but it is interesting….

This is NOT photoshopped or in any way modified. Just a straight “print screen” and paste into Gimp. Save as.

At Amazon shopping for a Dutch Oven

So I’m noticing that the right most Dutch Oven is looking a bit, er, um, “unusual”… I was thinking more along the lines of an 8 inch or smaller, but maybe a 10 inch would do….

So I click on the link, just to see if it was an error on the loading of the search page… 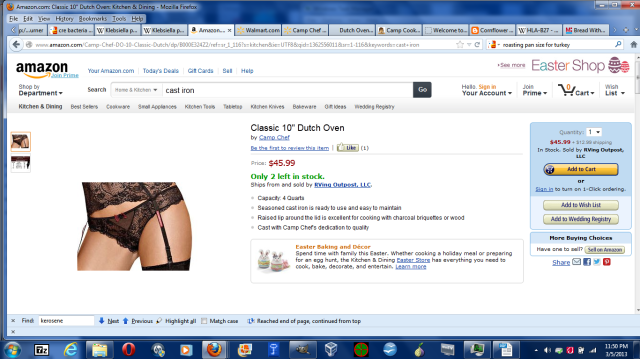 It says it is already seasoned and works well with wood… What’s a fellow to do?

I mean, I am shopping for a Dutch Oven. Near as I can tell, this is Dutch… and it makes all the right claims… and it’s “easy to maintain”…

A technical managerial sort interested in things from Stonehenge to computer science. My present "hot buttons' are the mythology of Climate Change and ancient metrology; but things change...
View all posts by E.M.Smith →
This entry was posted in Humor and tagged Amazon, cooking, Dutch Oven, humor. Bookmark the permalink.

26 Responses to Shopping for A Dutch Oven and…