I have the habit of opening some link, then thinking “I want to save that” or deal with it or ‘whatever’ until I end up with a few dozen links sitting open. Don’t really want to bookmark them forever, but want some kind of ‘available’. OK, I’ve got way too many open now, so I’m just not going to be ‘dealing with them’ in any reasonable way any time soon.

Instead, I’m going to just list them all here. Not a lot of analysis or commentary. Just links that were of interest in some way, and maybe a one liner on some of them. So this is a collection of “stove” related things. Many of them DIY camp stoves. Some just interesting technologies or places to get them.

“Instructables” is a fun place where folks come up with interesting things you can make / do. Turns out there are directions for several interesting stoves:

Made from a drink can with strong neck.

An emergency stove made from a stack of can lids and paper towel circles. Fuel is added with a dropper / squirter. Absolute minimal and can be made with a can opener…

Using a one hole paper punch and a can of clams to make a stove:

Zenstoves has a lot of very good info on stoves and fuels. Well thought out, pretty complete, and quite accurate.

Generally agree with them, other than their cute-but-snide remark about Coleman stoves. Mine have always worked well.

Their page on “Sterno” and similar gel fuels.

Using a Sterno Folding Stove (wind screen / pot holder) with a Swedish “SVEA” (Trangia) stove. Nice to know it works well, a bit dumb that he cut out the two center bars of the grate that let you use it with small pans / cups:

What looks like Yet Another Entry Point / Name for St. Paul Mercantile. Seller of “Butterfly” brand stoves from Indonesia:

Lots of good information on kerosene appliances and source for wicks. A bit “survivalist”, but seems to know their stuff. I like that they will say things like ~”Yeah, not for anything by Kerosene, but you can use FOO in this one too”.

A related site (same “wick guy”) on interesting things to know about Kerosene, including some specs and how it works with wicks:

His page on a 2 burner “Butterfly” Kerosene stove in the style of long ago (“wickless” that uses a wick on edge but with a metal cage called a “catalyzer” that makes a vapor flow which mixes with air to burn):

The burner seen ‘close up’:

And his views on kerosene stove maintenance:

Cooking on lamps. NARI claims their ‘multifuel’ lantern uses 40% less kerosene than the Petromax type (common non-US “Coleman” lantern – i.e. incandescent mantle lantern – often using kerosene. Made by “Butterfly” and “Brite Lyt” among others. BriteLyt also has a ‘cooker’ option and a multifuel lantern that will burn alcohols.)

A couple of videos about their stoves and lamps:

An interesting article about what such an alcohol stove can mean to poor folks in a refugee camp and the trees for miles around:

How to make a stove for alcohol using some copper tubing and a jar:

The Britelyt lanterns. These folks are a bit preachy and push their patents a lot. Tend to ‘talk dirt’ about the competition. Never mind that they have just taken over a very old technology and then made a few simple improvements (like changing the fuel spigot end from ceramic to stainless steel):

A collector of old lanterns who asserts that the old Kerosene spec had more ‘light ends’ in it, and that adding in a bit more ‘light stuff’ (think ‘gasoline like’) can make them work like they were designed to work:

(I agree with him, BTW. Early on, as in 1800s, production of kerosene was maximized so all the ‘cut’ that could go in went in. Now we optimize for gasoline and leave in kerosene only what we must… plus CARB and related air laws have made the ‘cut’ heavier so it evaporates less.)

A parts diagram for a pressurized “Primus” type kerosene stove. I have the modern build from ‘Butterfly’ ( it works well and build is ‘OK’).

Note it is called a ‘spirit’ burner. I just ran mine on “Odorless Mineral Spirits” that in the USA are a kind of light kerosene. I suspect it would run on most anything from gasoline to Diesel (as another site claims) but that using gasoline is a bit risky… The tank warms in use and you reduce power by opening a vent to vent vapor / pressure from the fuel tank… Not risky with kerosene, on gasoline?

Works fine with very little odor at all (maybe more on kerosene? or maybe not…) only 3 minor complaints, two very very minor.

1) The enclosed stamped sheet metal ‘wrench’ doesn’t fit the nut. A bit of filing and it will, but I’m more likely to put a real wrench in the ‘kit’ anyway.

2) The burner jet is a bit off center so the heat is about 2/3 one side, 1/3 the other. This impacts use so actually matters. But it mostly means one side of pot heats up more than the other. Maybe as easy as a jet swap to fix it. (Analysis ‘later’).

3) The “legs” had a bit of ‘catch’ on going into the leg mount tubes. Then hard to get back out. Would have been no-problem had I put them in, one at a time, with a twisting ‘reaming’ motion to smooth things instead of pushing all three down hard and straight while the burner was running and thus having them ‘stick’ a bit… Did eventually come back out with some pulling and such after shutting off the burner ;-)

Of those three, only #2 really bothers me, and even that isn’t enough to really care. In a “disaster” this stove will be Just Fine and it is easier to use than a Coleman gas stove. Best used as a ‘set up and use table stove’ rather than a backpacking stove. Love the brass finish… “Someday” I’ll find the same stove made by someone as a higher quality item… this is ‘workable and OK’. And reasonably cheap to buy. 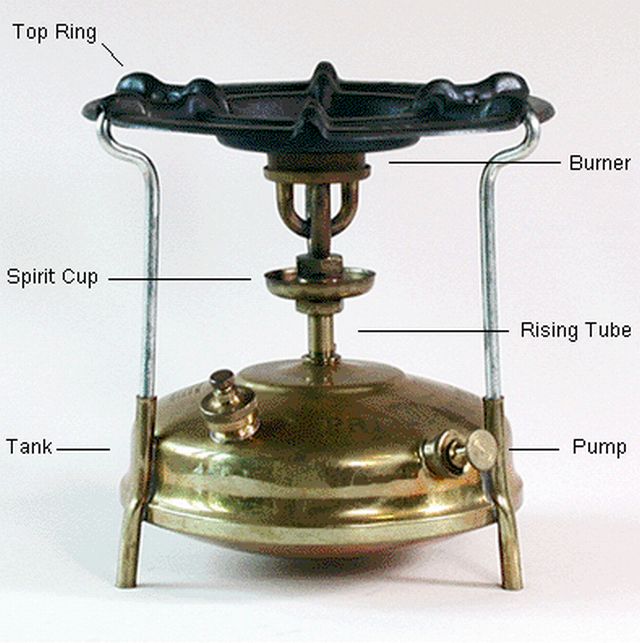 Strictly not a stove, but a good link for “woodgas” and gasifiers:

The Manual for the Pederick Gasifier:

Latent heat of vaporization of some fuels:

Yes, I’m looking at fuel specs to see what ought to work in the same appliances. Though the ‘stoves and lanterns’ latest hot streak is reaching an end (thus this ‘marker’ so I can pick it up later without too much effort). I’ve pretty much got most of what I need to know and only have a few open questions. I’ve also got a Kerosene lantern / stove set that works, so my conversion of the ‘Quake Kit’ to kerosene is pretty much done. Also the ‘Patio Oven’ is to a workable process / stage. The “Someday Stove” can happen “someday”…

But these are some of the more interesting places I looked at along the way, and it’s nice to be able to find them again “for that day”. If you have any favorite makers or sellers of stoves or lanterns, feel free to post links and / or horror stories.

A technical managerial sort interested in things from Stonehenge to computer science. My present "hot buttons' are the mythology of Climate Change and ancient metrology; but things change...
View all posts by E.M.Smith →
This entry was posted in Emergency Preparation and Risks, Energy and tagged Butane, Diesel, gasoline, Kerosene, Lanterns, Propane, Stoves. Bookmark the permalink.

6 Responses to Collection of Stove Links