Not a lot to say, really. I went to Wally World today and picked up the 14 inch Grand Canyon Dutch Oven that was big enough to take a 1/2 a ham (butt portion) and added a couple of very large Russet Potatoes and some carrots. Then proceeded to the patio to make a Pile Of Bricks surround for the new 14 inch Dutch Oven so as to reduce fuel used.

The result is our Saint Patrick’s Day Feast.

(No I care not one whit what the Pope and Catholics say. He’s a Saint, and I’ll celebrate until I die.)

So, I started with 32 briquettes, but needed to add about a dozen or two more “along the way” along with trying to add some Manzanita along the way (courtesy of P.G. Sharrow) that made wonderfully smelling smoke that was wasted as it was outside the Dutch Oven (but I enjoyed the smell ;-) (The spouse closed the windows into the house as she does not like anything that causes her nose to function… Is “Philistine” a PC term these days?)

At any rate, here is the dinner for tonight, in honor of Saint Patrick: 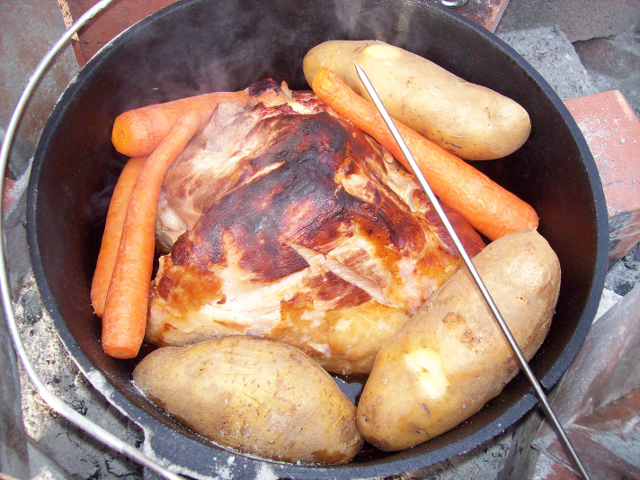 The Camp Chef series is a little bit deeper than the Lodge Dutch Ovens. So far, I like it better. You can also see the long ‘probe’ of the oven thermometer. The Camp Chef comes with a small port where you can insert such a thermometer. That, alone, is ‘worth it’ to a dedicated cook. That the Camp Chef is cheaper than the Lodge is just “gravy”. I also got a 4 qt Texasport D.O. It camed lacking seasoning and with now such thermometer port. Yet looks like a decent D.O. A review is to follow… but I think as a low cost option, it is fine. I’m willing to ‘season my own’, and at 1/2 the price, well, that’s well worth it.

I put a ‘brick surround” around the D.O. as I think it helps conserve fuel. One thing the thermometer made clear was some simple physics. An empty D.O., or one with a fluffy bread loaf in a pan, has one mass. A D.O. with an 11 pound ham and 4 pounds of vegetables quite another. So the “rule of thumb” that certain briquette counts match a temperature is a bit naive. I had to add a dozen or so briquettes when the ham and potatoes went in. Not so much ‘toward the end’. You have a fixed surface area, and fixed heat transfer. The mass in the pot matters. Rather a lot. (Thus my fixation on having a thermometer port…)

All in all, I really like the Camp Chef line and their allowance for a thermometer port. It lets me have control of the cooking process. ( It was cruising at 275 F when the ham went in. Sans port, I’d have not realized I needed more coals..)

OK, a couple of more pictures (then I really need a Tequila Moment before dinner is served… ;-)

Camp Chef 14 inch Dutch Oven from above with brick surround

You can see my attempt to use a bit of Manzaneta on top of the Camp Chef 14 inch Dutch Oven from above with brick surround as charcoal fodder. It is much better as ‘smoking material’. It evolved to survive our endemic fires in California, and smokes more than burns. Best used in the Smoker, IMHO.

So this is a view from the side. The thermometer reads a steady 350 F. Just about right. This was prior to opening the Dutch Oven for the first picture of everything inside.

So, at this point, it’s time for dinner. Just one more shot of Tequila, since, after all, I am Hispanic then time to serve. Enjoy Saint Patrick’s day, all you Irish and Dutch Hispanics! (As the Spanish Empire at one point included the Netherlands, folks of Dutch ancestry, among others, are able to claim being “Hispanic” per USA rules.)

A technical managerial sort interested in things from Stonehenge to computer science. My present "hot buttons' are the mythology of Climate Change and ancient metrology; but things change...
View all posts by E.M.Smith →
This entry was posted in Food, Human Interest and tagged Dinner, Dutch Oven, Ham, Hispanic, St. Patrick's Day. Bookmark the permalink.