On a thread at WUWT about a new graphene osmosis filter possibility, someone was talking about how there was now working Osmosis power being produced in Norway and one other place. OK, I think, this is new to me.

Yes, in theory you ought to be able to recover some of the power some how…

Turns out the way they do it is to let the water back through another membrane into the salty side, and that raises the pressure, which can then be let out through a turbine. OK, it’s a pump. Got it.

So “How efficient and how much cost”? comes to mind. Can anyone with an ocean front property and a stream power their house with this?

Well, maybe if they built a second house…

Here’s a picture of a ‘typical’ 4 kW generator. Realize that making 4 kW on an industrial scale will take an even smaller part (of a bigger total object). So this is pretty much “the biggest it will take”. You can get these that run on natural gas, just like the big industrial turbines. Capstone Turbine has a 60 kW machine where the engine is about the size of an oatmeal round tub and the whole unit about the size of a large home refrigerator.

You can look at the Capstone product here:

if desired. Oh, and it looks like they have a wiki page with a drawing of the inside of a turbine too:

Why mention all that? To give an idea what present real working solutions look like.
For comparison, here is an Osmosis Power Plant of 4 kW Capacity: 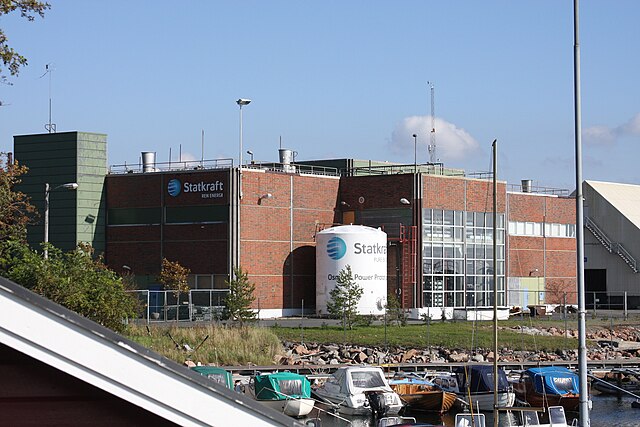 From the wiki about it:

The plant is a prototype developed together with Sintef and began test power production on 24 November 2009. Mette-Marit, Crown Princess of Norway officially opened the plant. This plant had been planned since the summer of 2008, with a water usage of 10 litres of fresh water and 20 litres of salt water per second. It is expected to give a power output of between 2-4 kW. With better membranes it is assumed that the power for a similar plant can be increased to about 10 kW. A commercial plant is expected to be built between 2012 and 2015

Yes, it’s a prototype. Yes, it will get better. Heck, they probably even have R&D offices in that building. But a Capstone generator is able to make 60 kW and is small enough to barely show up in a picture that size. They have a 200 kW unit that is much smaller than just the tank in front of the building. I’d guess less than 1/10 th the volume as a stand along co-generation unit with pipes and all. They are used to power buses and trucks as non-cogen configured motors.

So this thing is, IMHO, not quite ready for showtime. “Show and tell” maybe…

A technical managerial sort interested in things from Stonehenge to computer science. My present "hot buttons' are the mythology of Climate Change and ancient metrology; but things change...
View all posts by E.M.Smith →
This entry was posted in Energy, Tech Bits and tagged generator, Osmosis, power. Bookmark the permalink.