I’ve bought one of these small ovens:

I put it on the same Coleman Camp Stove ( two burner unleaded gasoline / naphtha) so I could compare it to the Coleman Oven.

First off, there is little comparison. Lets get that out of the way right up front. The Coleman is a bit of fold up tin that leaks heat like crazy and has very uneven heating. ( I did a review just a bit back. ) This oven has inner and outer walls. This not only reduces radiative and convective heat loss, it keeps the outside a bit cooler.

On the stove, it fit “OK”. It is designed to fit on the Butterfly Stove line, but my stove is not here yet. (Due to a problem with the shipper, the oven arrived and the stove didn’t. Oh Well. St. Paul Mercantile was incredibly fast and efficient at dealing with it when I called, taking immediate action the same day. My stove is again on its way.) But I couldn’t stand waiting, so decided to do the “first burn” on the Coleman Stove. Even though it has more concentrated heat in the middle zone so is an excessive test environment compared to the design stove. Yet I think some folks will be planning to use this oven in just this way.

With the burner on “blow torch high”, the oven began to warm up rapidly. It reached 140 C in 1 minute and 150 C a few seconds later (yes, the thermometer is in C. I’ll get used to it. If it bothers you, set a regular oven thermometer inside and just look through the very large glass door… Yes, a real glass door. So I can “check how brown the bread might be” just by a look.)

That 150 C is a tad over 300 F, so good for many kinds of cooking. At that point I dialed back the burner to medium or medium low and the temperature stabilized quickly. I have no doubt that leaving the thing running on high it could hit the 200 C top of that thermometer range. ( 392 F, withing the error bars of 400 F – a temperature I rarely use, but good for rapid browning of small things like cookies and buns. Personally, I use 375 F as I like a lighter brown, easier timing, and chewier cookies ;-)

In the foreground you can see both the old, and the new replacement burner for the Butterfly Pressure stove I reviewed. I’ve not yet gotten to test the new one, but a visual inspection looks like it is straight. In comparison, the old one looks just a tiny bit ‘tweaked’ where the jet joins the fuel heating tube. More on that in some post yet to be done. Oh, also it looks like the new one has a copper color top while the old one is a bit more brass colored. I don’t remember what the first one looked like ‘pre-first-burn’, so we’ll have to see if it’s a color change in use. (Look at the nut for the color, not the discolored part where flames have made it very hot).

Again, I was very pleased with John from St. Paul Mercantile and the service provided to get this replacement burner to me. They are “Good Folks” and do what it takes to keep the customer happy. (Or, at least, they kept me happy ;-)

Back at the oven…

During warm up, I touched the sides and top just a bit (gingerly and fast). It isn’t insulated that I can tell, just two layers of metal with air between, yet the sides stayed cool far longer than I’d expected (and vastly more than the Coleman Camp Oven, where inside at 300 F and outside are about 1/2 mm of metal apart… ) I was not brave enough to test the insulation capacity when the thermometer was reading over 125 C ;-) But the way it held temperature when dialed back to medium on the burner implies reasonable efficiency.

Oh, and the “grating” on the stove got to cherry red right over the middle of the burner during the warm up. It is probably best not to go “full blast” if you don’t need to. The Coleman Oven may need full blast (just to stay warm…) but this one does not. In some future bread making efforts, I’m going to try a ‘slow warm’ at the ‘cruise’ setting on the stove.

Opening the door and (gingerly and fast) moving the hand around inside it seemed evenly heated. There is a ‘deflector plate’ on the bottom shelf. I’m going to try putting a small cast iron pan directly over the burner next time (the opening in the bottom of the oven is large enough to accommodate that) or perhaps an ‘oven stone’ to do a double deflection and heat swing dampening. I don’t think it is needed at all, I just want to play with it ;-) But I’d put things where bottom heat needs moderation on the top shelf. So, wet casserole on the bottom, biscuits or rolls on the top shelf. Since I’m mostly interested in bread, I’ll be wanting to keep that bottom temp under control. Even if it is just a ‘paver tile’ under the bread pan. I doubt this oven will need it, but the Dutch Oven over too many coals did. (Or I could just cut back the number of coals ;-)

This picture is a bit visually confusing, what with two oven racks and the Coleman stove grate going all over. Look past them to the sheet metal plate in the middle. (It was still hot… that’s why I didn’t take the shelf out… not liking the idea of grabbing 150 C metal with bare hands ;-) That bit of metal got quite hot over the “full blast preheat”, but unlike in the Colean Oven did not go to “cherry red”. It’s a bit further from the burner. Turning down to “medium”, it doesn’t get nearly as hot. Notice it has discolored. Most metals discolor on extreme heating. I don’t know what metal it is, exactly. It looks a bit like aluminized steel. It has a slight bit of whitish ‘dust’ at the margin of the burn area. At some point I’m going to take it out (once cooled) and evaluate it a bit more. I suspect is is aluminum oxide, but doubt it is an issue. It might also just be ash from some manufacturing oil. I expect that a quick wash and it’s gone and done. If that bothers you, put a ceramic tile over the burner or a square of iron to prevent the “blow torch on the metal” effect. Or get the Butterfly Stove it was designed for.

OK, now that it has cooled, closer inspection shows it is a layer of aluminum over steel that got hot enough for the aluminum to melt, separate, and in some places oxidize. Most of the metal layer just rubbed and washed off. Now I’ve got a mild steel deflection plate. Fine with me. If it starts to rust, I’ll just “season” it ;-) Now back to the original posting…

Me? I’m here to do testing and push the edges. Besides, it doesn’t bother me. It’s going to get lasagna drippings on it anyway ;-) “Someday” it might need replacing, if many “blowtorch” events are done. That looks pretty easy. Just a bit of bent tin, really. Heck, wire an old pie pan to the bottom ;-) Though again, IMHO, this part is just doing it’s job and did it fine. It prevented the “blow torch” from hitting what would be on the rack above it.

In this test, the only “negative” I’ve found is that the latch part (that has a nice ‘stay cool knob’) is held to the door by one screw and nut. That was a bit loose ( likely vibrated loose in shipping, I’d guess). Easily fixed with a turn of the screwdriver and rather like the pot lids that have the occasional screw that loosens. I think adding a lock washer to back might prevent that. I know that “two nuts and a lock washer” will work if, for some reason, the shaft of the screw needs to stay loose. I’ve not investigated that bit for the simple reason that it is mostly a ‘non issue’. Screw into nut is loose? Turn it… (It’s take more time and effort to describe it than to tighten it…)

A close look at the now cool latch shows that if you tighten the nut, it will pull the latch tight to the door at the nut / bolt in the backside of the insulated knob and “lock up”. This latch is designed as a ‘free floating’ drop bar. That attachment point must be loose and free. OK, two “fixes”. Put a dab of “JB Weld” or similar heat proof glue on the end of the bolt inside the oven, or, put a second nut and lock nut on the inside and lock the two together. (Or just ignore it, an if the nut gets too close to the end of the shaft, give it a couple of turns with your fingers prior to firing it up… I’ll most likely do that one ;-) Back to the original posting: 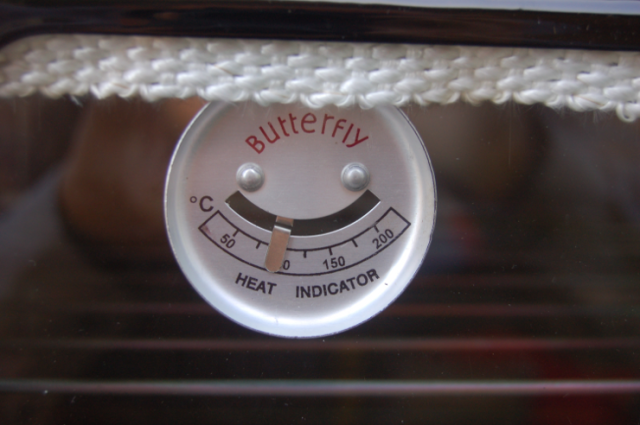 That white stripe is an insulated seal that St. Paul Mercantile adds to the oven (they also upgrade the glass).

And here is a ‘perspective view’ from a bit further back. The stove is sitting on a 16 inch ‘paver’ that is on top of a 1950s era brick BBQ grill that is a monster to use right as the fire pit is a fixed distance (of about a foot and 1/2) below the grill. I basically use it as a large table for “experiments with fire things” now ;-)

There was little smell during operation. The only “Coleman Fuel” smell came when I turned the burner off and ‘leftover’ fuel in the generator gets ejected but not burned. so “Note to self: Take food out, THEN, turn off the burner.” It will likely be even less of an issue with the Butterfly kerosene stove as the smell is less aromatic. That, and there is no ‘generator’ so it burns any residual fumes until there are not enough to keep the flame going, then goes out. (Can you tell I’m eagerly awaiting the stove? ;-)

OK, I’ve not put a loaf of bread through it yet. But this test gives me good confidence it will work. It is generally a good idea to do “first fire” before cooking food anyway as some appliances make a fair bit of strange smells and / or bits of smoke from manufacturing oils or paints. This one did not. There was a hint of some from over by the door hinge and the insulating white fiberglass strip had a bit of discoloration at that end, but well inside normal ranges.

So sometime in the next day or two, we will have “First Bake” and I’ll post an update.

For now, I’m quite happy. The Coleman Camp oven is OK if you are desperate for a fold up camp oven of minimum space and size. It could make a tin of muffins or some corn bread fingers over some large heat source, like a bed of campfire coals. If you want to bake real meals in small but competent oven, that does not fold up, this one is a much better choice.

A technical managerial sort interested in things from Stonehenge to computer science. My present "hot buttons' are the mythology of Climate Change and ancient metrology; but things change...
View all posts by E.M.Smith →
This entry was posted in Emergency Preparation and Risks, Food and tagged Butterfly, Coleman, Oven, Test. Bookmark the permalink.