Some things you buy, they slowly disappoint. Others are fine at what they promised, nothing more. Then there are the ones that slowly grow on you. They under promised and over deliver. The Butterfly Oven is turning out to be one of those. (Other than the thermometer that is useless… but that’s a $3 fix).

So one of the ongoing PITA “issues” I have with my Modern Electronic Electric Oven, is that in a fit of what is most likely lawyer driven paranoia, they limit the lowest temperature to 176 F. Above the “bugs will grow” temperature so nobody can sue them for putting a pot roast in the oven at 140 F and dying from rampant bacterial growth. Except… My Mum had a gas oven. The pilot light kept it Just Warm Enough for things like rising bread or even making yogurt. There’s a host of DIY zymurgy in the home, broken by the removal of a ‘hold 100 F or so’ temperature. The old work around of an incandescent light bulb in a cardboard box is also being buggered by the light bulb ban. So I’ve been “dealing with” the GE Electric Oven by the expedient of turning it on for 5 to 7 seconds every 15 to 20 minutes (to some extent dependent on room temperature and also how often I remember ;-)

So I’ve got a loaf of bread ready to pan, and make a quick run to the Patio Kitchen to make a cup of coffee … and see the black Butterfly Oven sitting in the sun. Nice and warm… Well, one thing leads to another. It was a touch cool so I turned the window to face south. Sun on bricks under it, it’s a nice 90 F (and rising a little still). I have a “solar powered bread riser” ;-)

Now I get to sit on the patio sipping tea or coffee and reading the laptop… instead of checking my clock and fretting. Nice.

I will need to check that the temperature doesn’t get out of hand as the bricks warm, but the AEK Oven has had overshoot to 137 F some times as my “count” and guess about how long I’d missed and all resulted in too much energy in. (It has a min reading of 100 F so I have to put in just enough energy to barely overshoot to get my first reading…) With the occasional excursion to the 120 F to 130 F land the bread has still done OK. The Butterfly changes temps in the sun even more slowly so easy to watch. Besides, it is right in front of the patio easy chair. “Sorry dear, working, have to watch the bread you know!” ;-)

The design of the Butterfly has small holes in the inner skin at the top of the sides, then other little holes on the outside skin at the bottom sides. Heat must rise, then enter the outer wall and slowly sink, before exiting. This puts a warm blanket of air (exhaust) around the outside of the oven. A rather efficient idea. It also means that if set it on a flat brick floor, there isn’t much ‘exhaust’ and it is an air insulated box with a sun facing glass panel…

In summer, I may need to change when I rise the bread, as it is now doing about 95F so in August at Noon when the air is already that hot, well, maybe out of the sun will do ;-) It will still be a nice closed bug and dust proof place to rise the bread. (Well, maybe not strictly “proof”, an adventuresome bug could try to navigate the maze of exhaust ports… but I’m in a relatively low bug area). In winter with no sun, perhaps a tea candle or warming Sterno burner may be needed. The effect is the same regardless of heat source. I have a nice rack equipped somewhat insulated box with glass window and door through which I can read a thermometer that can be gently heated as a very nice warming oven. It is flexible enough on heat source that I can find something suitable. Indoors or out. Sunny or rain.

Here’s a picture showing three thermometers in the oven. One is my trusty photography thermometer that is great for fermentation science work too. In the background is the oven thermometer (that I calibrate off of the Digital Electric Oven). In the foreground is the somewhat useless one that comes with the oven. You can see that the Voss is showing precise temperatures in the rising range while the other two are both pegged on the bottom. (Why thermometer makers think nobody ever makes yogurt nor rises bread is beyond me…)

A bit later I’ll be baking that bread using the added Oven Thermometer. I bought it at a local grocery store for about $3 or $4 and it was reading the same as the Digital Electric Oven out of the box. It’s not hard to get a decent oven thermometer and it can make all the difference in the world to results.

FWIW, the door fit is loose / adjustable enough that a thin wire digital electric probe could likely be put in the oven and the lead taken out the door without any problems. I just like the analog stuff is all ;-) 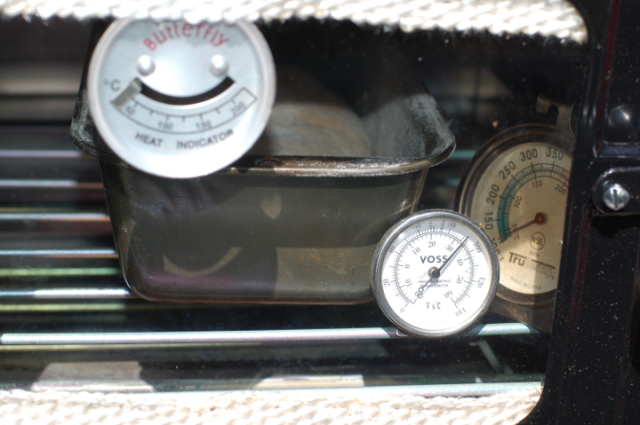 Here is a ‘perspective shot’:

Here you can see from a quartering angle what it looks like. The Pile Of Bricks are just in their ‘stowed’ configuration as a rectangular stack. (When they are not busy being a POB BBQ/ Grill or Rocket Stove. ) I’d just set the oven on them to be off of the Coleman Stove. Then discovered this “feature”. (Or invented it… I decided to see if it would work and oriented the oven while instrumenting it. Discovery? Invention? Stating the obvious? Hard to choose ;-) Any surface under it ought to work, with minor variation of heat storage and solar absorption. One can also add or remove shading if needed. The keen eye will notice it is presently located where the afternoon shadow slowly creeps up it. If I forget about it for a couple of hours, the sun will ‘self limit’ the heating. I may have to move it at 3 pm, but I won’t have killed the yeast…

You can also, barely, make out the holes at the bottom of the outside side. There are matching holes on the inside top side. The very top of the oven and the back look to be sealed air spaces. (The bottom is, obviously, open and the front is a single thickness of glass door in a double thickness facing). It would be very easy to duplicate this overall design in other materials and at other scales. So, say someone lived on a farm and wanted a family sized oven to cook a turkey. Has some sheet metal skills and a large stove. Well, making a “box in a box” with holes in two outside bottom edges and two inside top edges, then adding a door with glass in it, would not be all that hard.

Ok, that’s if for now. I think it’s time for me to get back to work in the easy chair watching bread rise and contemplating my next beverage of choice… It can be a lot of work leaving the “Cash Economy”, but worth it. Sure, I could have worked to make $10 to keep $6 of it (spending $4 on taxes and crap) to spend $3 of that keeping the car fueled insured and etc. to drive to the store to spend the rest on a $3 loaf of plain bread. But this takes about the same amount of time and work to just make the bread yourself, all told, and this is much more pleasant… Besides, after a couple of years of trying, I’m now a better baker than the commercial bulk outfits…

At this point, and with the thermometer upgrade, I think I’ve solved my electric oven problem. The Dutch Oven / American Camp Oven has fixed it too, for some class of meals. I’ll still be working out how to make bread in the Dutch Oven, but being able to see the bread in this Butterfly oven and the ease of use, will likely make this the “daily driver” of ovens for me. I’ll still be on the lookout for others, for better, for alternative ways; but the “need” is now met (in two ways… D.O. and Butterfly)

Now if only I didn’t have 2 weeks in spring where something outside makes my nose twitch and sneeze ;-)

Well, as some of my relatives say “The bread has done ris.” So the risen bread is now in the oven and cooking away. With the replacement thermometer, it is clear why on “First Fire” I burned the aluminum off of the deflector plate.

You ought to be able to see that the “built in” thermometer reads about 75 C while the replacement, a bit further back, is reading 375 F or about 190 C. Over 100 C error in the included thermometer.

There is absolutely no need to go to ‘blowtorch mode’ on the main burner to warm this oven to baking temperatures. I was trying to reach 200 C on that front temperature indicator thinking that was about normal bread baking temperature. In reality, it was at least 300 C (and possibly higher) headed up toward 600 F and “melting lead” temperatures. (a bit over 620 F or 328 C )

To warm the oven, I used a medium high setting. The oven started warming quickly per the added thermometer. Once it reached baking temperature (that was fairly quick- just a minute or two) the major issue that I had, was not realizing how efficient this oven would be. I didn’t “dial it back” enough, quickly enough. Eventually I got down to “a minimum simmer” setting on the Coleman, and the temperature started dropping from 400 F back to my more usual 350 F to 375 F. I’ve now cut it back to ‘as low a simmer as I usually ever do” in an effort to test getting to 300 F or 325 F; that I often use for very light color crusts. It is oh so slowly cooling to that temperature.

The bread has been in the oven about 25 minutes, and looks great. With the very low power setting, a tank of fuel will last a very long time. What’s more, I don’t need to keep pumping it up or anything, really. The fuel burn is low enough that it’s more or less a “set and forget” operation. I like that.

Once the bread is out of the oven, I’ll put up a picture of the product so we can all see the result.

At this point, I have to give the oven a “Works fine, does great, very happy” rating.
The temperature indicator not so much…

Here’s the product. I deliberately ran the temperature a bit low (since the prior two loaves, one in the D.O. and the one in this oven trusting the gauge, came out charred and ‘very well done’ respectively). The result is a very light blond / tan loaf. Which I like anyway. I’ll probably do the next loaf 25 F higher for just a bit more brown. That I can do exactly 25 F higher pleases me greatly ;-) Baking is all about control of conditions. 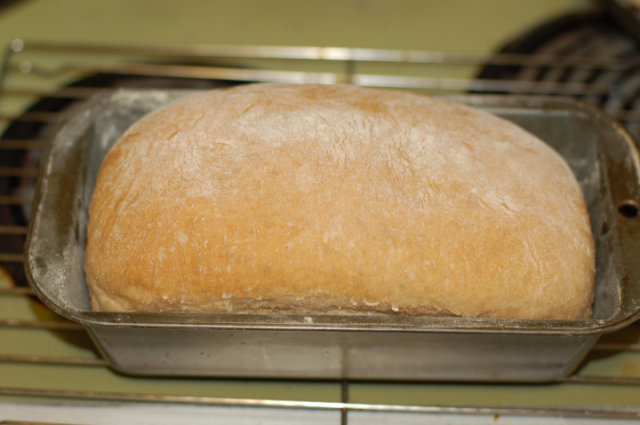 A technical managerial sort interested in things from Stonehenge to computer science. My present "hot buttons' are the mythology of Climate Change and ancient metrology; but things change...
View all posts by E.M.Smith →
This entry was posted in Emergency Preparation and Risks, Food and tagged Bread, Butterfly, Oven, Rising, Solar. Bookmark the permalink.