Here’s a static example for today: 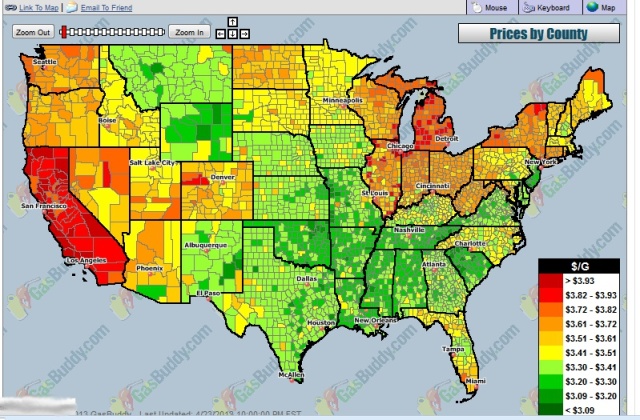 You can get a live / current map here:

And a Canadian map:

I’m in that dark red blob of California where we are dancing with $4 gasoline… I note longingly that some folks are a good 25% lower price than here (or we are 1/3 more than there).

In a sane gasoline market, such extreme disparity would not exist, and certainly not with nice clean lines at state borders…

Interesting perspective on things… Looks like folks in Texas can cook on cheaper gasoline in their camp stoves, and get electricity at 1/3 to 1/4 the price here in California. Heck, with a situation like that, a guy might be able to afford making a living…

You can zoom in the live map and eventually it shows prices for each station. They also have a list of average prices at selected cities around the nation.

Lowest(by State and by City):

And notice how many California cities are in the highest:

I know, I know… Even though I’m in that $4 area near San Francisco, not a lot of sympathy from you folks in the EU or Australia or the UK. Or heck, even the folks in Hawaii.

We also get to pay sales tax of about 10% on the gas tax that’s included in the price. Yes, taxing a tax… Oh Joy.

But just to put some context on it, here’s a 10 year chart from the same folks:

IMHO, gasoline at $4 / gallon (or $3 in the “Heartland”) is a significant part of the economic ‘malaise’. Take a vacation where a drive to L.A. and back is about 800 miles? At even 40 mpg that’s 20 gallons or $80. Something that folks did just to go to L.A. for a weekend is just not going to be done at all. Why drive to L.A. to see Disneyland and be out over $240 just for the drive, overnight hotel, and ticket for one person? I can get a laptop for that much at Amazon… And if my car is a 20 mpg ‘work truck’ that blows out to $160. Just for the gas.

Believe it or not, folks used to “bomb down to L.A.” as a day trip. Not even worth thinking about now. Same thing for the “run to Reno” or Vegas. Take a drive up to the mountains for a bit of hiking in the woods? At $40 to get there and now with a variety of fees (where our parks were once ‘free’ as we already paid for them in our taxes) that’s lost a lot of interest too.

Essentially, it look like we are being priced out of economic activity. As that happens, the economy slows. Normally, one would expect a recovery as that slowdown pushed prices back to reasonable levels. As things stand now, we get prices held up by government money printing and spending, while the tax revenues drop, so they raise tax rates. Spiral decent into hell follows.

Texas is looking a whole lot more interesting these days…

A technical managerial sort interested in things from Stonehenge to computer science. My present "hot buttons' are the mythology of Climate Change and ancient metrology; but things change...
View all posts by E.M.Smith →
This entry was posted in Economics - Trading - and Money, Energy and tagged gasoline, Map, Price. Bookmark the permalink.