I had originally intended to go via I-70 / Eisenhower tunnel / northern route to Florida. It adds about 6 hours and a couple of hundred miles, but I’d not taken that route for a decade or two, while I’m “very familiar” with the southern route via I-10 / south Texas. (I also like the I-40 middle route as a change some times…)

Well, because it is snowing in the Colorado mountains. We have a shot at getting “Snow in June”… just a couple of days to go.

But, for me, I do not want to be slogging through snow in the mountains. Looks like the desert path for me. Again…

Now, even if I get past the snow, there’s a line of severe weather / tornadoes / large hail from Oklahoma toward Chicago. Some of it baseball sized. Don’t want to hit hail that large doing 70 mph (when it is in wind that may be that fast too…)

Another “push” to the desert route. (Though San Antonio had some flooding from a 9 inch dump of rain… so one hopes it’s drained off quickly).

So, in short, there’s a wall of “interesting weather” between California and Florida and I’m “threading the needle” between bits of it. Oh Joy… /sarc;

The Colorado DOT has a nice set of live web cameras on the freeway. Doesn’t help much if you see clear, then the storm hits and dumps a load of snow 7 hours later as you are going through… but a nice insight all the same. I snagged a screen capture of “right now” on the approach. I’ve also got a saved image from “a while ago” from a news report, so you can see how things change over just a part of a day. 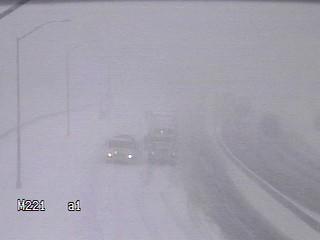 I picked that up from here:

Where the caption says:

Snow closed I-70 between Silverthorne and the Eisenhower tunnel, pictured here, on Thursday morning, May 30, 2013. (Colorado Department of Transportation)

This is what it looks like on the DOT page if you click on a camera. This is Hermans Gulch a bit after the tunnel reopened and on the Denver side:

So snow on the center divide, but the lanes are open now.

There is an “Eisenhower Tunnel Tour” you can click on in the right hand panel of that DOT camera page. It gives a selection of cameras, in rotation, around the tunnel. Right now: Moving, but a bit sloppy… and more snow than in Hermans Gulch. On these images it is hard to see if light snow is falling. On The Weather Channel, they are showing active snowfall and saying it is falling now.

At any rate, not worth the risk just to avoid Arizona. (Arizona has become one large speed trap. I counted 9 speed cameras on one section of freeway through Phoenix last time I headed out, and on the way back came through I-40. There I was headed into a setting sun, so took just a second to look down and grab my ‘shades’. Looking up, the freeway had gone from 70 mph speed limit to a posted 35 at the border station (truck check). I barely avoided getting a ticket from the TWO banks of cameras laid out to catch folks who are a tiny bit slow about making a near panic slow down… )

Though I might try a different route through Nevada / Utah / New Mexico… Need to check for snow in New Mexico ;-)

Who would have thought that getting to Florida in late May / early June would require thinking about snow and chains and road closures and… (Yes, I know, it can snow in the Rockies any time of the year… but I was promised Global Warming would make that just a distant memory…)

Regardless of how I get to “middle of Texas”, it looks like I can get past below the tornado block that is ranging from about The Panhandle on up over all of Oklahoma and on up toward Canada. There’s a little “gap” north of Oklahoma that opens some times. I’d planned to scoot through one of those gaps. But with the Colorado route toast, I’m not so interested in “the high road”. Then again, maybe I-80 could get past the snow… though north west Nevada had “freeze warnings” on this weather page yesterday:

This page gives a nice ‘look ahead’ at where there is likely to be a mess about the time you get there: ;-)

We will see how the trip shapes up as I point the nose at some direction and “see what comes”. I’m still tempted to do the I-80 / tornado alley run, just for something different. Though prudence is nagging at me that the Desert Southwest would be a lot more reliable… But isn’t that the choice we always have? Novelty and adventure vs ‘safety’ and boredom?

A technical managerial sort interested in things from Stonehenge to computer science. My present "hot buttons' are the mythology of Climate Change and ancient metrology; but things change...
View all posts by E.M.Smith →
This entry was posted in AGW and Weather News Events and tagged Colorado, Desert, Snow, Tornadoes. Bookmark the permalink.

65 Responses to Weather and Traveling