An interesting graph from this posting:

Unfortunately, I’m on one coast and all of my Weather Data Rig is on the other coast. I do have some of the data downloaded to a USB drive, but the computer with all the code and compilers on it are on the other coast. Looks like I’ll need to “build up another rig” if I want to re-make that S.H. graph with various data sources.

Maybe on the Raspberry Pi. It has a decent Linux on it, and a good FORTRAN compiler. Most of the weather codes historically were written in FORTRAN, so that’s the language of choice most of the time for dealing with the “FORTRAN Friendly” fixed data format records they provide. “C” can be a bit more difficult about fixed format records (yes, it works, but it’s a PITA compared to a FORMAT statement) and you don’t have to worry about data type issues and such quite so much if you stay in the same language. Likely not an issue with the weather data, but for some other classes of problems it does show up; so the safe choice is usually minimal change.

At any rate, for now I’m just going to assume this graph is as it appears to be.

Note that the two peaks, at about 1998 and 2010, has 2010 lower than 1998? (The S.H. is the red line, that ends lower than the other one for anyone color blind). Note that the end point is a bare bit over 0 anomaly? (Somewhere in the 1/100ths of a degree C range). Air temperatures are largely slave to the oceans, this says that the Southern Hemisphere has exited the “Global” Warming question… I do wish I had my full rig with me as I could knock out a “by latitude” graph on the most recent land data for the S.H. and know if those thermometers are following or not. Anyone with a handle on that, feel free to pipe up. IF the land is not also near zero anomaly, that raises some serious questions about the S.H. land thermometers…

In short, this graph shows 1/4 Century of no net warming of the Southern Hemisphere Oceans. So what happened to “Global” Warming?

There isn’t whole lot of land in the Southern Hemisphere, so the fact that the oceans have not warmed is kind of a big deal: 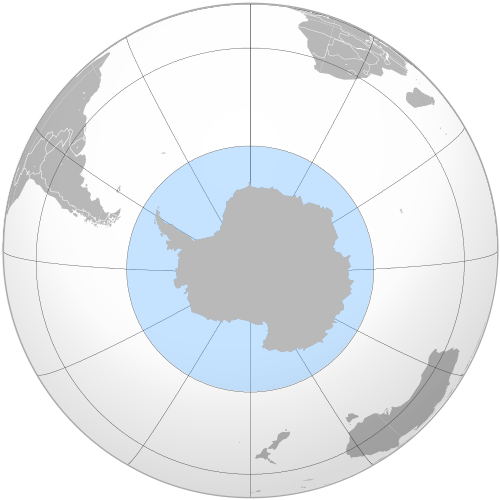 A technical managerial sort interested in things from Stonehenge to computer science. My present "hot buttons' are the mythology of Climate Change and ancient metrology; but things change...
View all posts by E.M.Smith →
This entry was posted in AGW Science and Background and tagged AGW, Global Warming, Southern Hemisphere, Temperature. Bookmark the permalink.

17 Responses to Southern Hemisphere Getting Colder