Le Chatelier and his Principle vs The Trouble with Trenberth

There is a marvelous and generalized Principle that if you push things, they push back. (As a rough paraphrase). It is Le Chatelier’s Principle.

Not always, and not as uniform as a Law, but still very widely applicable. I first ran into it in Chemistry, but the wiki says it has found much broader uses:

If a chemical system at equilibrium experiences a change in concentration, temperature, volume, or pressure, then the equilibrium shifts to counteract the imposed change and a new equilibrium is established.

This principle has a variety of names, depending upon the discipline using it (see homeostasis, a term commonly used in biology). It is common to take Le Chatelier’s principle to be a more general observation, roughly stated:

Any change in status quo prompts an opposing reaction in the responding system.

In chemistry, the principle is used to manipulate the outcomes of reversible reactions, often to increase the yield of reactions. In pharmacology, the binding of ligands to the receptor may shift the equilibrium according to Le Chatelier’s principle, thereby explaining the diverse phenomena of receptor activation and desensitization. In economics, the principle has been generalized to help explain the price equilibrium of efficient economic systems. In simultaneous equilibrium systems, phenomena that are in apparent contradiction to Le Chatelier’s principle can occur; these can be resolved by the theory of response reactions.

Once again, this is not a Law. There can be cases in multiple variables or cases with known positive feedback where that new equilibrium is a long ways away. Think of nudging a stone over the edge of a small bump on a tall mountain. It WILL come to rest again, but a long ways down…

Still, as a general rule, one ought to look for such things. It is important to expect some manifestation of Le Chatelier’s Principle and look for it as a first behavior. To assume it isn’t active in a physical system is to start off expecting the unlikely.

So why mention this?

Because, at the core of it, the atmosphere is a physical / chemical system and this principle has wide application in such systems. Because a (nearly trivial) increase in the trace gas of CO2 is a nudge to the equilibrium. Now the air is a dynamic disequilibrium system in most places at most times, but it is seeking equilibrium. So any “nudge” ought to expect a “counter nudge”. Where I would speculate that “counter nudge” to come is from water. Why? Because it is THE dominate feature of the IR bands of interest and of the heat moving properties of the troposphere in general. Heck, even above that it has some role.

So a tiny increase of CO2 could be expected to be offset by a similar tiny change in the water cycle as the system seeks to return to the prior conditions. Right out the gate, to PRESUME a positive feedback runaway system, as the Global Warmers do, is a mistake. The first presumption ought to be a negative feedback and Le Chatelier taking his due. Only when that can NOT be shown, ought suspicion move on to a positive feedback somewhere.

So “what is the size of water”? Can we see what it does in the IR bands in the atmosphere in any informative way?

In a prior posting I showed the graph before. It is well worth repeating: 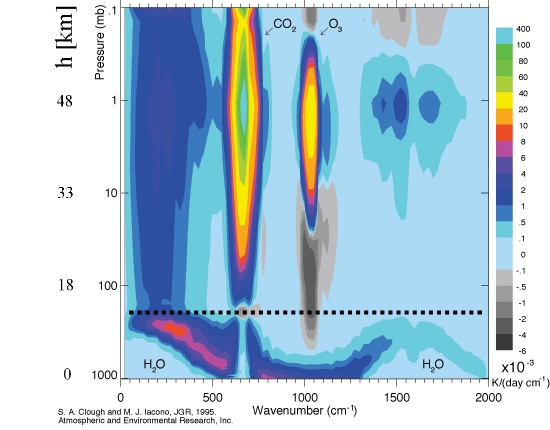 That dashed line across the middle is the idealized Tropopause. (In reality it varies from about 17 km over the equator down to near ground level at the poles (or “indistinct” as they said in the wiki…)).

Below the Tropopause convection rules. Above it, radiative heat transport rules. Right off the bat, we have a big clue about why AGW (human caused ‘Global Warming’) is based on errors. The belief that radiative forcing at ground level ‘matters’ is simply shown a fantasy by the existence of the Troposphere. BY DEFINITION, it is convection, evaporation, condensation, clouds and rain that matter in the Troposphere. But lets look at that graph some more and pick up some interesting bits.

Which is paywalled, but the abstract says:

A line-by-line model (LBLRTM) has been applied to the calculation of clear-sky longwave fluxes and cooling rates for atmospheres including CO2, O3, CH4, N2O, CCl4, CFC-11, CFC-12, and CFC-22 in addition to water vapor. The present paper continues the approach developed in an earlier article in which the radiative properties of atmospheres with water vapor alone were reported. Tropospheric water vapor continues to be of principal importance for the longwave region due to the spectral extent of its absorbing properties, while the absorption bands of other trace species have influence over limited spectral domains. The principal effects of adding carbon dioxide are to reduce the role of the water vapor in the lower troposphere and to provide 72% of the 13.0 K d−1 cooling rate at the stratopause. In general, the introduction of uniformly mixed trace species into atmospheres with significant amounts of water vapor has the effect of reducing the cooling associated with water vapor, providing an apparent net atmospheric heating. The radiative consequences of doubling carbon dioxide from the present level are consistent with these results. For the midlatitude summer atmosphere the heating associated with ozone that occurs from 500 to 20 mbar reaches a maximum of 0.25 K d−1 at 50 mbar and partially offsets the cooling of 1.0 K d−1 contributed by H2O and CO2 at this level. In the stratosphere the 704 cm−1 band of ozone, not included in many radiation models, contributes 25% of the ozone cooling rate. Radiative effects associated with anticipated 10-year constituent profile changes, 1990–2000, are presented from both a spectral and spectrally integrated perspective. The effect of the trace gases has been studied for three atmospheres: tropical, midlatitude summer, and midlatitude winter. Using these results and making a reasonable approximation for the polar regions, we obtain a value for the longwave flux at the top of the atmosphere of 265.5 W m−2, in close agreement with the clear-sky Earth Radiation Budget Experiment (ERBE) observations. This agreement provides strong support for the present approach as a reference method for the study of radiative effects resulting from changes in the distributions of trace species on global radiative forcing. Many of the results from the spectral calculations reported here are archived at the Carbon Dioxide Information and Analysis Center for use by the community.

Yes, it’s another model… Measured would be better, but “going with it”, it’s a very detailed “line by line” model. They are specifically modeling the cooling of IR sensitive gasses (water vapor, CO2, Ozone). That’s what we want to know. (They also run off into Panic Global Warming Land, but hey, even Chicken Little might have some useful information…)

I got the actual image from another source (reference in the Troposphere Rules posting) that captioned it:

Now notice that there is a nice bright diamond of CO2 radiating away heat in the stratosphere, but just below it and below the dashed line, in the troposphere, the CO2 band is doing nothing. That’s what they are talking about. The CO2 band is already closed in the troposphere. It is NOT going to be any more closed with more CO2. Furthermore, “downwelling” IR from the CO2 above it will NOT open it. (Nor reach the ground). A shut door is shut. All the noise and smoke about CO2 and downwelling IR is just stuff and nonsense. That door is shut. CO2 as a radiative agent is limited to action in the stratosphere, where it is a net cooling agent.

Add more CO2, it will not make the ground warmer.

Now enter Le Chatelier. At most, CO2 could cause some other species to have a reduced effect. It could cause some change in the percent of IR radiated in the stratosphere via O3 or via the small water vapor present. It might couple to the water in the troposphere and conductively put some energy in the tropospheric water vapor engine (that then conducts it to the stratosphere). Le Chatelier says to expect an adaptation toward restoration of equilibrium, and there is a lot of water available to act in just that way. So that’s the first and most likely place to look.

I’d look for “downwelling” IR from the stratospheric CO2 to be absorbed into water vapor or CO2 at the tropopause, and cause that layer to very slightly rise in height, or to put a bit more energetic water in the tropopause / stratosphere mixing band; or perhaps to just be radiated back to space from those water vapor cloud tops. (Notice all that red from radiative water near the top of the troposphere…) In short, to attribute any effect in the troposphere to CO2 IR radiation is an error. It is water that dominates the Troposphere. CO2 IR effects matter in the stratosphere, and there they are cooling.

So what about Trenberth?

From his paper here: http://www.aps.org/units/fps/newsletters/200904/trenberth.cfm?renderforprint=1 we get this graph.

Now the Trouble With Trenberth begins…

First off, notice that “back radiation” from “greenhouse gasses” at 333 Watts. It is shown as coming from the Tropopause. Right at the cloud tops next to it for precipitation. Exactly HOW do we get “down welling” and “back radiation” from CO2 in exactly the place where the prior graph shows “nothing happening” from CO2? Just not going to happen. But notice he does not say “CO2”, he says “greenhouse gasses”. Wait a minute… what the??… What he is showing, per the first graph, is the back radiation from the water vapor and clouds NOT CO2!

Now what would Le Chatelier be looking for….

Notice that Evapotranspiration and thermals are shown as constants? IFF there were more “backradiation” hitting the surface, don’t you think a bit of added evaporation would happen? That thermals might pick up a couple of more Watts and raise it a hair higher? That added water and clouds would cause more precipitation and cooling? As that added water rises, it would make a bit more clouds and those 79 Watts reflected from clouds would increase.

The added CO2 in the stratosphere would be radiating more to space, making a colder stratosphere. Now it tends to descend to the surface in polar vortex flows, so I’d expect a cooler night pole with more cold air (and polar water) flowing in toward the equator.

All of these things in conformance with Le Chatelier and his principle.

Trenberth shows them all as holding constant (or in the case of downflow of the stratosphere at the poles, missing entirely).

Trenberth assumes that CO2 will cause more IR to pass through a closed radiative window, in a convective non-radiative atmospheric zone, not being absorbed into the already saturated CO2 band, heat the surface, but NOT cause more convection nor more evaporation, and cause a rise of surface temperatures without a compensating mass flow or phase change. And that, IMHO, is The Trouble With Trenberth. It is non-physical and violates Le Chatelier’s Principle.

Given a choice of embracing Trenberth or Le Chatelier, I’ll take Le Chatelier… The system adapts, and doesn’t change much. Most likely a trivial change of water distribution and no temperature change at all.

A technical managerial sort interested in things from Stonehenge to computer science. My present "hot buttons' are the mythology of Climate Change and ancient metrology; but things change...
View all posts by E.M.Smith →
This entry was posted in AGW Science and Background and tagged CO2, Global Warming, IR, Le Chatelier, Trenberth. Bookmark the permalink.