Well, looks like we’re in for a round of Chest Thumping at the international level.

Putin, having had a taster of gathering territory via military means, is now sure nothing will be done to slow him down and he can do what he wants.

NATO, a bit late and very tepidly, is trying to find it’s “courage” with both hands…

The USA, via Obama, is sitting on it’s thumbs
(sporadically swapping between spinning and not…)

All in all, this is an accelerating mess.

I do need to take a moment to praise Al Jazeera. I know, I know. Many folks like to toss rocks at it on general anti-{whatever} principle. I’m compelled to point out that they are generally a much better source of news about the international world than anything “domestic” to the USA (and often more and sooner than the BBC). They are no more biased than Fox, CNN, BBC, whatever either. Their bias is clear, when present. On stories about Islam, Arab states, or Israel: they are clearly and modestly strongly biased pro-Arab and pro-Muslim. Not exactly a surprise. Everything else tends to be fairly ‘straight’. (They often get “rocks tossed at them” by fellow Arabs and fellow Muslims about not being biased enough…) So why mention this? It was on Al Jazeera that I first saw this story. BBC America was running non-news shows. Fox is going on about Noriega and Iran. CNN is presently running commercials… and ‘smear stories’ about “gate crashing” by Secret Service ( i.e. scandal sheet news). But Al Jazeera is covering something that matters to all of the world. Sadly, typical. That’s why I watch them. News all the time, little direct political “commentary”. And NOT stuck on who is sleeping with whom or what pocket which American politician is picking.

With that out of the way, I then went fishing for more confirmation stories.

So this one looks OK:

MOSCOW (AP) — Russia plans to station state-of-the art missiles in its westernmost Baltic exclave and deploy nuclear-capable bombers to Crimea as part of massive war games to showcase its resurgent military power amid bitter tensions with the West over Ukraine.

The Russian military exercises this week range from the Arctic to the Pacific Ocean and involve tens of thousands of troops, the Defense Ministry said Tuesday.

The Iskander missiles will be sent to the Kaliningrad region that borders NATO members Poland and Lithuania as part of the maneuvers, said a Defense Ministry official, who spoke on condition of anonymity because he wasn’t authorized to comment publicly.

The official also said Russia will deploy long-range, nuclear-capable Tu-22M3 bombers to Crimea, the Black Sea peninsula that Russia annexed from Ukraine a year ago.

In a statement, the Defense Ministry said the Baltic Fleet, the Southern Military District and the Airborne Forces have been brought to the highest stage of combat readiness and have started moving to shooting ranges as part of the drills.
[…]
U.S. Air Force Gen. Philip Breedlove, NATO’s supreme commander in Europe, has termed Russia’s “threats to deploy nuclear-capable Iskander-M missiles in Kaliningrad” part of what he called the Kremlin’s “pattern of continuing behavior to coerce its neighbors in Central and Eastern Europe.”

The Kremlin, in its turn, has voiced concern about U.S. plans to beef up its military presence near Russia’s borders. Later this month, U.S. troops are holding joint exercises with forces from EU nations Estonia, Latvia and Lithuania.

Four Polish NATO MiG-29s flew training missions in Lithuania on Monday, under the command and control of an alliance AWACS surveillance aircraft in a small corridor between Belarus and the Kaliningrad region. The mission — described as ‘routine’ by NATO officials — prompted the Russian military in Kaliningrad to scramble half a dozen fighter jets to monitor the exercise.

So NATO is trying to look like they give a damn about the Eastern states, with military posturing. Russia, in response, is putting nuclear capability in the heart of that Eastern area via that bit of Russia that used to be Prussia, then Poland and Germany, and now is an isolated scrap of Russia. 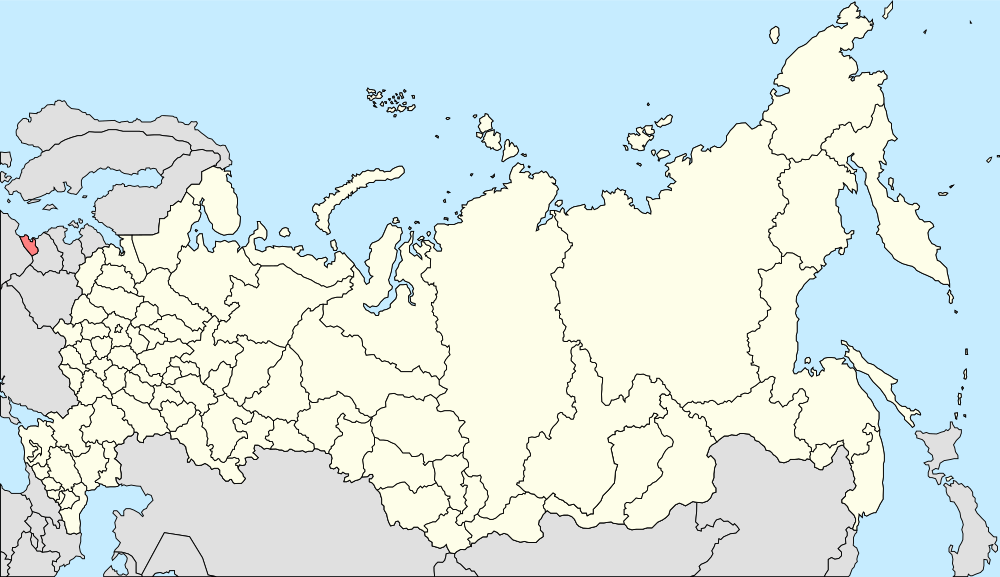 Kaliningrad is the red dot on the left in Eastern Europe

Now the Estonian and other Baltic states have a significant Russian population. Russia would love to connect Kaliningrad to “Mother Russia” and has had a history of absorbing places where it sees a significant ethnic Russian population (even if only recently put there, such as during the USSR era). See the recent annexations in Georgia, Crimea, and now the Ukraine. So it’s a reasonable concern of who is next on the lunch plate.

Though Lithuania, the closest Baltic state to the Kaliningrad Oblast is only 5.8% Russians.

Still, with at least a couple of parts of the various Baltic states having a large Russian population, it is clearly a temptation to Putin. He also knows Global Warming is bunk and is looking to collect more warm water ports and more warm farm land. Though Crimea, while a warm water port, has been a bit snowy and cold this year. In an interesting comment here:

Social network users are uploading photos of a snowy Crimea.

According to the Ministry of Energy, due to adverse weather conditions (strong winds of 20-25 m / s, snow) mass outages occur in the distribution networks of 6-10 kV (GUP RK “Krymenergo”).

Residents remained without electricity in 13 settlements of Feodosia, Kerch, Sudak and Leninsky districts – about 18 ,250 people. Total power outages is 13 MW.

So one year after Russian annexation, the news is about the weather…

Argiris Diamantis points out the unusual nature of the snow. (The Wiki says that Yalta usually has an average Feb. temp of 1.6 C (35 F) so above freezing and this site http://www.meoweather.com/history/Ukraine/na/44.5/34.1666667/Yalta.html says March has typically only 3 snowy days…)

Argiris Diamantis says:
March 18, 2015 at 5:30 am
Seventy years ago the Yalta Conference took place in the Crimea, held February 4–11 1945.
Here we see F.D. Roosevelt, the American president, on his way from the airport to Yalta. There was no snow then in February 1945, but seventy years of “unprecedented global warming” later, the Crimea is covered with snow in March and battered by blizzards.
http://en.wikipedia.org/wiki/Yalta_Conference

So the folks in Crimea know that it’s not “warm”, as does Putin, as do folks all over the snowy place. Having a European “warmer water” port will be very important to Russia as things get colder over the next decades. I’d not put it past Putin to be playing a long game to recapture the Baltic States into a reformed USSR like “Federation”.

The big question, though, is will Russia and NATO end up “accidentally” going at each other, or will NATO just be a noisy yappy dog that squeals and runs away at the first kick. Especially if the Russian natural gas is shut off… I think Putin will be willing to take that bet.

What do the folks in the Baltic areas think?

«In order to avoid accusations regarding breach of mutual obligations, NATO member states use the principle of deployment of armed forces on a rotational basis, which implies that this is not permanent deployment, but rather having one unit replace the other,» – said the official.

He adds that Moscow does not care whether these armed forced are deployed close to the Russian border on a permanent or rotational basis.

«We will continue following the development of this situation. We have not yet made any decisions in regard to any possible breaches. We will come to conclusions should a need arise. They will definitely have an impact on the military-political dimension of Europe’s security,» – said Ulyanov.

This Monday, the Pentagon announced USA plans to deploy 3,000 of its soldiers in Baltic States in order to take part in massive military exercises there.

Atlantic Resolve operation is planned in order to prove to Latvia, Lithuania and Estonia that the alliance continues supporting them.

Pentagon Spokesperson Colonel Steven Warren has said that the delivery of helicopters, transport vehicles and heavy armoured vehicles to Riga has begun. He has also said the operation will last 90 days.

Warren has confirmed that approximately 3,000 have been sent to Latvia.
[…]

US General John O’Connor mentioned in Riga that the deployment of armed forces would demonstrate to Russian President Vladimir Putin the collective commitment of alliance forces to come together.

According to O’Connor, tanks and support vehicles will remain in Latvia «for as long as necessary to hold off Russia’s aggression».

So we are playing a game of “rotation” to avoid triggering a violation by having troops there “permanently”, and are pre-positioning a load of tanks. (Frankly, I’d rather pre-position a lot of A-10 Warthog (Thunderbolt) tank killing airplanes, but being old and non-sexy our military is retiring them, sort of, maybe, despite them being the best tank killer we have. Sigh.) 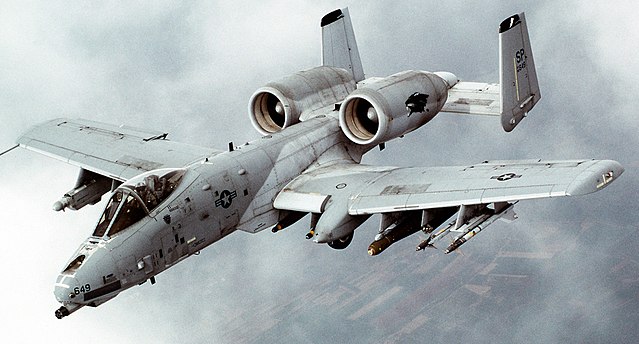 One of my favorite airplanes – The A-10 Warthog (Thunderbolt II)

At any rate, it’s a game of bluster and “mine is bigger than yours”. One can only hope that avarice and greed does not underestimate “resolve” (and / or that we actually have some resolve, but maybe not feeling the need to show our “little one” still works…)

To me, it looks like Putin has measured up Obama and found him a weak appeaser (rather like everyone else on the planet has sized him up) and sees little in NATO to really worry about any more. Expect to see Belarus continue to act as a part of Russia (it has already snuggled up nicely) and expect attempts to get (through it) connections back to that warm water and the Kaliningrad Oblast. Expect to see NATO make a lot of noise, and not do much, as the USA puts material over there, but doesn’t keep enough people around to matter (or get hurt and look bad in the polls for Democrats).

A technical managerial sort interested in things from Stonehenge to computer science. My present "hot buttons' are the mythology of Climate Change and ancient metrology; but things change...
View all posts by E.M.Smith →
This entry was posted in Political Current Events and tagged Crimea, Kaliningrad, Nato, Russia. Bookmark the permalink.