Brats and Prats of the World Unite! – Dems Tantrum Attack

Well, we have enough evidence now to know how the Democrats intend to operate in the Trump years.

The intent is to be brats and prats and throw a tantrum and refuse and scream. I.e. all the best tools of a 3 year old.

For any non-native English speakers, the word “prats” might not be familiar, so a definition:

prat (præt)
n
slang an incompetent or ineffectual person: often used as a term of abuse

Now while that last one limits it to the human body, IMHO nothing in the common usage of “prat” prevents it from poetic use as “horses ass”…

The news has been full of stories of such planning for obstruction. Fox was reporting that the State Of California has offered up Eric Holder as their point man in being The Biggest Prats In The Nation!! (i.e. obstructionists in chief… OOTUS? Obstructionist Of The US?)

California lawmakers already are preparing for a legal brawl with the Donald Trump administration – and they’ve got President Obama’s former top attorney in their corner.

Top state Democratic lawmakers announced Wednesday that former Attorney General Eric Holder has been tapped as outside counsel to advise the Legislature on potential challenges with the Trump government. He will lead a team from the Covington & Burling law firm, where he’s been working since leaving the Obama administration in 2015.

That one is well worth reading, but the one I want to mention is this one:

It has the wonderful lead-in picture of THE Reason the Democrats have gone rushing to the basement. It has Obama in the lead, Pelosi and Schumer sucking up behind, and all three of them with Idiot Grins on their faces. 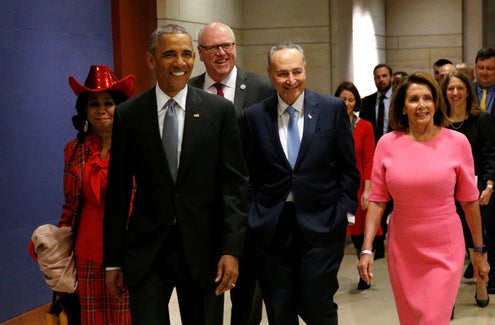 I’ve bolded some bits in the quote:

Democratic leaders came out of a meeting with President Barack Obama Wednesday saying they will refuse to help Republicans if they repeal the Affordable Care Act without a replacement plan.

WASHINGTON — Congressional Democrats came out of a strategy meeting with President Barack Obama vowing to refuse to work with Republicans if they repeal Obamacare without a replacement plan.

Republicans have frequently promised to “repeal and replace” the Affordable Care Act. But while they are vowing to move rapidly on repeal, there are no details on a consensus replacement plan yet.

Obama met with Democrats on Capitol Hill Wednesday morning to chart out a plan to save Obamacare. They emerged from the meeting announcing they will not work with Republicans to craft that replacement plan if Republicans insist on forging ahead on repeal.

“We are telling Republicans, if you are repealing, show us what you’ll replace it with first and then we’ll look at what you have and see what we can do,” said Senate Minority Leader Chuck Schumer.

“They’re repealing, we’re not. It’s their obligation to come up with a replacement first and I think we have unanimity within our Democratic caucus on that position.”

Though Republicans are about to control both Congress and the White House, Democrats say they can still rely on the court of public opinion and Republicans are going to quickly find themselves in trouble without a replacement for the health care law.

Their whole strategy comes down to being a Refusenik and fomenting obstruction. This is going to impress the Joe Sixpack and Jane Working Girl of the USA exactly how?

What is is not in line with is the best interest of the typical middle class USA Citizen.

There we have the essential image of the incredibly out of touch Elite, preening and posturing and grinning like idiots, as they pilot their ship of non-state to destruction on the rocks of the angry Middle Class.

How does that go?
“If you are not part of the solution, you are part of the problem.”
I think that fits…

And the chemistry humor form:
“If you are not part of the solution, you are part of the precipitate.”
As the scum precipitates to the bottom of the vial…

A technical managerial sort interested in things from Stonehenge to computer science. My present "hot buttons' are the mythology of Climate Change and ancient metrology; but things change...
View all posts by E.M.Smith →
This entry was posted in Political Current Events and tagged brats, Democrat, prats, Tantrum, Trump. Bookmark the permalink.

33 Responses to Brats and Prats of the World Unite! – Dems Tantrum Attack