The Hadean is named for hades as it was a time of molten rock and hellish conditions. It ends at about 4 Billion years ago, when the late heavy bombardment ends. Then life evolved… Over Millions and Millions of years (or Billions, in your best Carl Sagen voice) 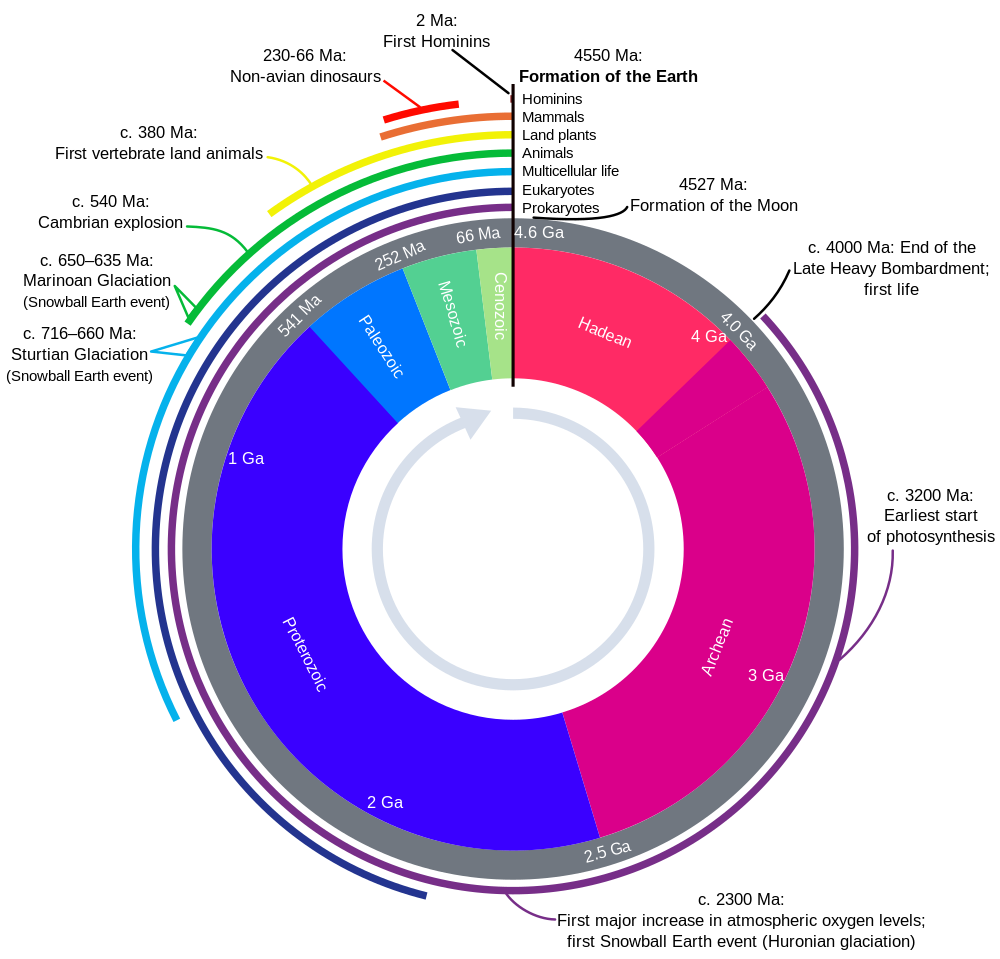 But recent micro fossils are showing ages at “about 4 Billion years old”. That narrows the time to evolve the cell considerably. Essentially into the error bands on dates. A few million years, or maybe none.

That then implies life forms spontaneously very very fast, or it arrived from space or “something else happened”. In any case, it makes the Billions of evolutionary years argument palid.

Oldest fossils point to thriving life on young Earth
September 1, 2016 by Will Wright

Australian researchers have found the world’s oldest fossils, revealing that diverse life forms thrived on Earth 3.7 billion years ago.
[…]
“The significance of stromatolites is that not only do they provide obvious evidence of ancient life that is visible with the naked eye, but that they are complex ecosystems,” Professor Nutman said.
“This indicates that as long as 3.7 billion years ago microbial life was already diverse. This diversity shows that life emerged within the first few hundred million years of Earth’s existence, which is in keeping with biologists’ calculations showing the great antiquity of life’s genetic code.”
The discovery pushes back the fossil record to near the start of the Earth’s geological record and points to evidence of life on Earth very early in its history.

Haematite tubes from the NSB hydrothermal vent deposits that represent the oldest microfossils and evidence for life on Earth. Credit: Matthew Dodd
Remains of microorganisms at least 3,770 million years old have been discovered by an international team led by UCL scientists, providing direct evidence of one of the oldest life forms on Earth.
[…]
Tiny filaments and tubes formed by bacteria that lived on iron were found encased in quartz layers in the Nuvvuagittuq Supracrustal Belt (NSB), Quebec, Canada.
The NSB contains some of the oldest sedimentary rocks known on Earth which likely formed part of an iron-rich deep-sea hydrothermal vent system that provided a habitat for Earth’s first life forms between 3,770 and 4,300 million years ago. “Our discovery supports the idea that life emerged from hot, seafloor vents shortly after planet Earth formed. This speedy appearance of life on Earth fits with other evidence of recently discovered 3,700 million year old sedimentary mounds that were shaped by microorganisms,” explained first author, PhD student Matthew Dodd (UCL Earth Sciences and the London Centre for Nanotechnology).

Basically, as soon as it was an aqueous soup, it had life. THEN evolution worked to turn it into all the other forms. I think that is a problem for the stochastic evolution of the cell folks.

A technical managerial sort interested in things from Stonehenge to computer science. My present "hot buttons' are the mythology of Climate Change and ancient metrology; but things change...
View all posts by E.M.Smith →
This entry was posted in Science Bits and tagged Fossils, Geology, Life. Bookmark the permalink.