You have got to be kidding me…

Hexanitrohexaazaisowurtzitane is a real compound? Who, what, wa… really?

Hexanitrohexaazaisowurtzitane /ˈhɛksɑːˈnaɪtroʊˈhɛksɑːˌæzɑːˌaɪsoʊˈvʊərtsɪteɪn/, also called HNIW and CL-20, is a nitroamine explosive with the formula C6H6N12O12. The structure of CL-20 was first proposed in 1979 by Dalian Institute of Chemical Physics. In 1980s, CL-20 was developed by the China Lake facility, primarily to be used in propellants. It has a better oxidizer-to-fuel ratio than conventional HMX or RDX. It releases 20% more energy than traditional HMX-based propellants, and is widely superior to conventional high-energy propellants and explosives.

Industrial production of CL-20 was achieved in China in 2011, and it was soon fielded in propellant of solid rockets. While most development of CL-20 has been fielded by the Thiokol Corporation, the US Navy (through ONR) has also been interested in CL-20 for use in rocket propellants, such as for missiles, as it has lower observability characteristics such as less visible smoke.

CL-20 has not yet been fielded in any production weapons system, but is undergoing testing for stability, production capabilities, and other weapons characteristics.

This stuff is just crazy. Two pentane rings (with nitrogen in them, so really azo something rings) and lots of oxidizer in the attached groups. Damn straight this will blow up. How in heck you make it is what would drive me around the bend. 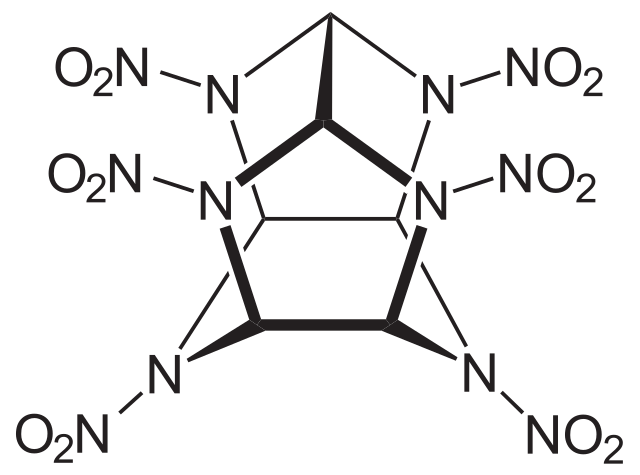 First, benzylamine (1) is condensed with glyoxal (2) under acidic and dehydrating conditions to yield the first intermediate compound.(3). Four benzyl groups selectively undergo hydrogenolysis using palladium on carbon and hydrogen. The amino groups are then acetylated during the same step using acetic anhydride as the solvent. (4). Finally, compound 4 is reacted with nitronium tetrafluoroborate and nitrosonium tetrafluoroborate, resulting in HNIW.

In August 2012, Onas Bolton et al. published results showing that a cocrystal of 2 parts CL-20 and 1 part HMX had similar safety properties to HMX, but with a greater firing power closer to CL-20.

In August 2011, Adam Matzger and Onas Bolton published results showing that a cocrystal of CL-20 and TNT had twice the stability of CL-20—safe enough to transport, but when heated to 136 C the cocrystal may separate into liquid TNT and a crystal form of CL-20 with structural defects that is somewhat less stable than CL-20.

OK, so it’s an improvement in solid rocket propellants (as long as it doesn’t blow up) and it can blow up nicely too. But really, would I want to be in the same county with something with that tight a ring with nitrogen in it, with two of them, with oxidizer on the vertices? Really?

A technical managerial sort interested in things from Stonehenge to computer science. My present "hot buttons' are the mythology of Climate Change and ancient metrology; but things change...
View all posts by E.M.Smith →
This entry was posted in Science Bits and tagged Explosives. Bookmark the permalink.