Venezuela – how to collapse an economy in 5 easy lessons…

The collapse of national economies is common enough that I have to think it is either “by design” by those who gain from it, or the human condition is just not able to restrain itself nor learn from the past very well.

The current poster child is Venezuela, yet right behind it is Argentina (again) and not that far back is the EU, and with the USA doing its best to join the parade.

The basics are simple. Overspend your means of production. Borrow heavily when that “has issues”. Inflate the currency when you can’t repay the real debt. Put in place wage, price and / or currency and capital controls when the resultant inflation causes the economy to stagnate and the people to get pissed. Watch as the real productive capacity of the economy wastes away due to no maintenance, no new construction, and capital flight. Await the revolution and the reconstruction.

With that, let’s look at Venezuela.

This gives a good synopsis of where things were in October 2016 (so about 1/2 year ago).

Venezuela is in its third year of recession. Its economy is expected to contract 10% this year, according to the International Monetary Fund. The IMF forecasts Venezuela will be in recession until at least 2019.

While the economy shrinks, the price of goods is skyrocketing. This year, inflation is expected to rise 475%, according to the IMF.

I’d count those as two separate things. Rampant inflation (now somewhere around 700% a year, so hyperinflation range) and a distinct economic recession. More on that below, but basically the non-oil economy is entering the moribund stage.

Things got really bad when oil prices started to plunge in 2014. Venezuela has the world’s largest oil reserves, but the problem is that oil is the only game in town. It makes up over 95% of Venezuela’s revenue from its exports. If it doesn’t sell oil, the country doesn’t have money to spend.

The problem is that Venezuela has not taken care of its cash cow — squandering opportunities to invest in its oilfields when times were good. Because the country has neglected with the upkeep of its oil facilities, production has dropped to a 13-year low.

Venezuela’s state-run oil company, PDVSA, hasn’t paid the companies that help extract its oil, such as Schlumberger (SLB). In the spring, Schlumberger and other companies dramatically reduced operations with PDVSA, citing unpaid bills.

That’s the specific. IMHO the generic description is just spending all you make in good times, then refusing to prepare for bad times. Had Venezuela invested that $100 oil revenue (or 1/2 of it) into a robust economy, they would not be having a problem…

NEVER spend all you make. Be frugal in good times, even more so than in bad times.

Despite a crashing currency and falling oil revenue, the government continued enforcing strict price controls on goods sold in the supermarkets. It forced food importers to stop bringing in virtually everything because they would have had to sell it for a major loss.

In the first half of 2016, food imports were down by nearly 50% from the same time a year ago, according to several estimates.

Only recently has the government stopped enforcing price controls, and food has returned to supermarket shelves. However, prices are so high that few Venezuelans can afford the food.

Buggery of the currency always ends in disaster. Have a stable and reliable currency. As soon as inflation gets over about 10% / year, real production falls off and gaming the system starts to grow, eventually to dominate.

4. Running out of cash and gold

Venezuela is running out of cash quickly. It doesn’t have enough money to pay its bills for too long.

The math just doesn’t add up: It owes $15 billion between now and the end of 2017, while the nation’s central bank only has $11.8 billion in reserves. At the same time, Venezuela’s only other cash source, PDVSA, is pumping less oil and risking default.

Most of its reserves are in the form of gold. So, to make debt payments this year, Venezuela has shipped gold bars to Switzerland.

China used to bail out Venezuela and loan it billions of dollars. But even China has stopped giving its Latin American ally more cash.

Don’t expect to live on the Credit Card. Eventually it gets revoked. Worse, that inability to get liquidity causes a decay and eventual collapse of the real productive plant and equipment (and staff…) eventually leading to ever lower income to service that ever larger debt. Nationalizing industries does NOT get rid of this problem, but DOES drive out any capital that wasn’t smart enough to have already left and assures nobody is going to send in more.

There’s some interesting bits in here, too:

Venezuela was a major oil producer. During $100 oil days, they spent like crazy on good times. Then started doing things like nationalizing the oil properties (thus assuring no further investment by outsiders). When oil prices dropped, they were on the hook for covering the shortfalls. Now, with investment and even maintenance on hold due to non-payment of debt and nationalizing things, even their present oil production is at risk and dropping.

This put a horrific bind on foreign exchange (mostly US $ ) and so they could no longer buy things needed to keep the other half of the economy running. Now it is spiraling down to zero. The graphs tell the story: 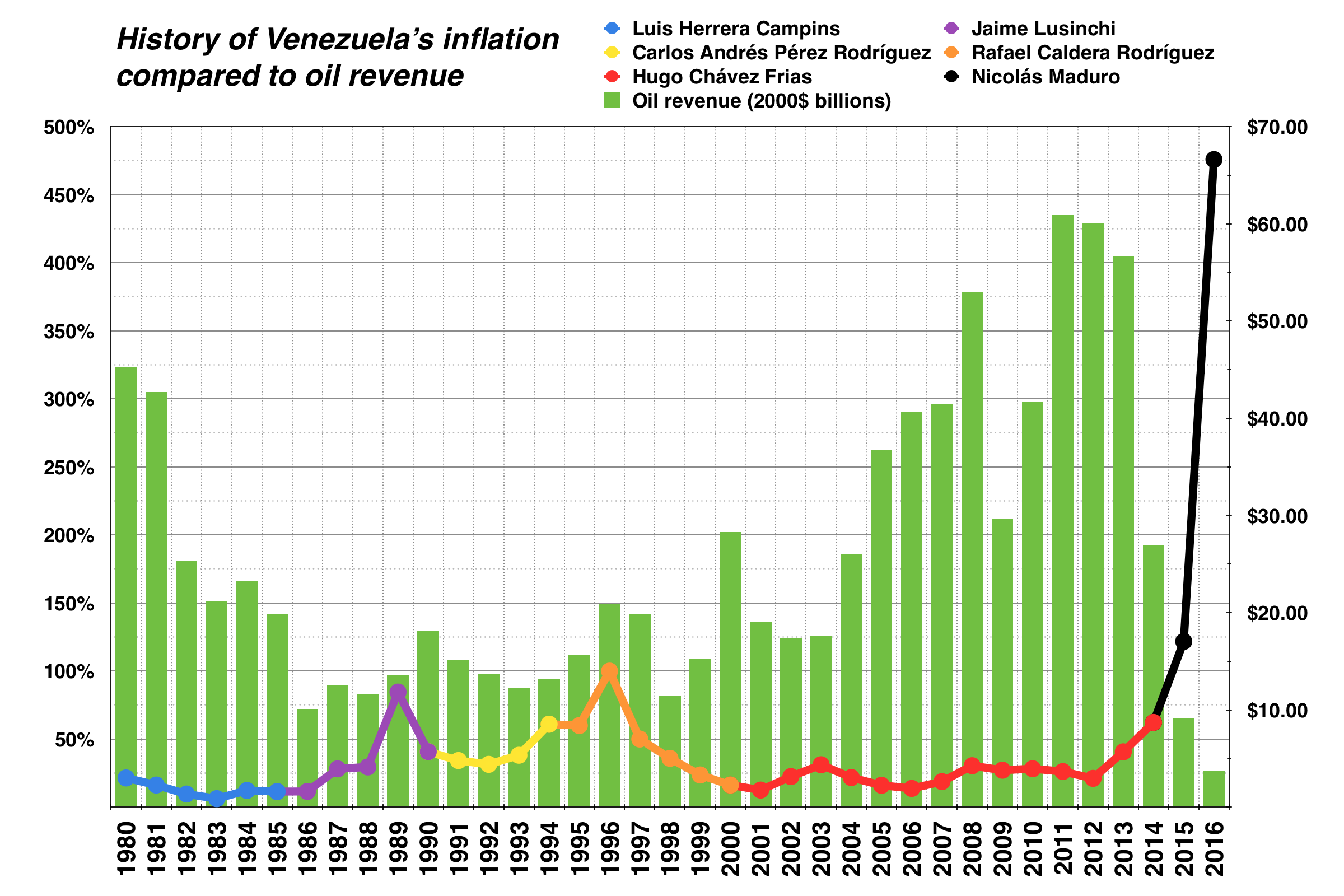 Their non-oil exports are likely a good proxy for non-oil production generally:

Since Hugo Chávez’s “socialist revolution” half-dismantled its PDVSA oil giant corporation in 2002 by firing most of its 20,000-strong dissident professional human capital, and imposed stringent currency controls in 2003 in an attempt to prevent capital flight, there has been a steady decline in oil production and exports and a series of stern currency devaluations, disrupting the economy. Further yet, price controls, expropriation of numerous farmlands and various industries, among other disputable government policies including a near-total freeze on any access to foreign currency at reasonable “official” exchange rates, have resulted in severe shortages in Venezuela and steep price rises of all common goods, including food, water, household products, spare parts, tools and medical supplies; forcing many manufacturers to either cut production or close down, with many ultimately abandoning the country, as has been the case with several technological firms and most automobile makers. In 2015, Venezuela had over 100% inflation – the highest in the world and the highest in the country’s history at that time. The rate increased to nearly 500% by the end of 2016 with Venezuela spiraling into hyperinflation while the population poverty rate was between 76% to 80% according to independent sources.

So, largely dependent on a single commodity for foreign exchange, spend all you make in good times, then don’t stop spending in bad times. Borrow like their is no tomorrow, since there isn’t…

Bugger the currency and tell the rest of the world you want to grab all their money via ‘capital controls’. This flushes every possible bit of money out of the country and out of your currency.

Attack the companies and workers in your most important productive sector. Drive it into the ditch. Nationalize chunks of it, assuring nobody will invest in your country for a generation.

When inflation becomes painful, institute price controls. This assures the rest of your economy grinds to a halt as well. Nobody will bother making things for a loss.

As these things drive your economy into recession, blame everyone but yourself. Blame your major customer (in this case the USA) along with driving away your lenders as they realize you are an incompetent deadbeat. (in this case China). Pay no attention to the rampant hardships driving your population into riot. Insist others are responsible and others need to pay for your needs.

So there you have it. Happening now in places from Venezuela to California to Greece to …

A technical managerial sort interested in things from Stonehenge to computer science. My present "hot buttons' are the mythology of Climate Change and ancient metrology; but things change...
View all posts by E.M.Smith →
This entry was posted in World Economics and tagged Collapse, economics, socialism, Venezuela. Bookmark the permalink.