Well, reports are that sometime on Tuesday (that ought to be about publishing time on this posting given all the time zone stuff) the Catalonian Parliament might, maybe, could be, voting for independence from Spain.

This has already caused a heck of a caterwauler in Spain and they haven’t even voted yet. Well, the people voted in a referendum… Well, the people tried to vote, but Spain decided it didn’t like Democracy and would rather have a Police State (at least judging from all the Police sent in to beat people up).

So depending on what happens when, this might end up being a hot topic du jour. As things unfold, we’ll have a nice front row seat on it.

Now one odd question that comes to mind is simply this: Wasn’t it the EU who were busy saying they could hive off bits of The United Kingdom? Prune a bit of Scotland here, maybe some North Ireland there? Take a tuck in Wales, perhaps? Snack on some Gibraltar and Isle of Mann? So if it’s OK to nibble chunks off the Sovereign Nation of the UK and keep them in the EU, isn’t it also OK to snip a bit off of Spain and have it stay in the EU? Hmmmm?

Perhaps the British Brexit Negotiator ought to issue an offer to open free trade with the Nation Of Catalonia? You know, just to put a curling iron on some short hairs…

They kept saying on the news that Catalonia had it’s own language, but never said just what made it different. Looking into it, it is more like old French bits than Spanish. Which also says why France is all Pantaloons In A Bunch over the idea of independence. Seems they have a large chunk of Catalans / Occitan speakers in France who, one presumes, would just love to be part of a Catalonian Nation. Shades of Kurds and a group split between nations that don’t want to let them be free.

The Wiki on the Catalan language is pretty good.

Catalan (/ˈkætəlæn/;[4] autonym: català [kətəˈla] or [kataˈla]) is a Romance language derived from Vulgar Latin and named after the medieval Principality of Catalonia, in northeastern modern Spain. It is the national and only official language of Andorra, and a co-official language of the Spanish autonomous communities of Catalonia, the Balearic Islands and Valencia (where the language is known as Valencian). It also has semi-official status in the Italian commune of Alghero. These territories are often called Catalan Countries.

Catalan evolved from Vulgar Latin in the Middle Ages around the eastern Pyrenees. 19th-century Spain saw a Catalan literary revival, culminating in the early 1900s.
[…]
Nowadays, France recognizes only French as an official language. Nevertheless, on 10 December 2007, the General Council of the Pyrénées-Orientales officially recognized Catalan as one of the languages of the department and seeks to further promote it in public life and education.

The language itself looks to me like a French / Italian relative more than a Spanish one. The Wiki has this to say:

Relationship with other Romance languages

Catalan shares many traits with the other neighboring Romance languages (Italian, Sardinian, Occitan, and Spanish). However, despite being spoken mostly on the Iberian Peninsula, Catalan has marked differences with the Iberian Romance group (Spanish and Portuguese) in terms of pronunciation, grammar, and especially vocabulary; showing instead its closest affinity with Occitan and to a lesser extent Gallo-Romance (French, Franco-Provençal, Gallo-Italian).

According to Ethnologue, the lexical similarity between Catalan and other Romance languages is: 87% with Italian; 85% with Portuguese and Spanish; 76% with Ladin; 75% with Sardinian; and 73% with Romanian.

Oddly missing from that last list is French. Anything having a high similarity with Italian and Portuguese ought to show some strong similarity to French, but it looks like they didn’t measure that.

The reference to Occitan in the first of those two paragraphs is an interesting one. It is another of those semi-forgotten Romance languages splattered about that part of Europe.

Occitan (English: /ˈɒksɪtən, -tæn, -tɑːn/; Occitan: [utsiˈta]; French: [ɔksitɑ̃]), also known as lenga d’òc (Occitan: [ˈleŋɡɔ ˈðɔ(k)] (About this sound listen); French: langue d’oc) by its native speakers, is a Romance language. It is spoken in southern France, Italy’s Occitan Valleys, Monaco, and Spain’s Val d’Aran; collectively, these regions are sometimes referred to as Occitania. Occitan is also spoken in the linguistic enclave of Guardia Piemontese (Calabria, Italy). However, there is controversy about the unity of the language, as some think that Occitan is a macrolanguage. Others include Catalan in this family, as the distance between this language and some Occitan dialects (such as the Gascon language) is similar to the distance among different Occitan dialects. In fact, Catalan was considered an Occitan dialect until the end of the 19th century.

Today, Occitan is an official language in Catalonia, where a subdialect of Gascon known as Aranese is spoken in the Val d’Aran. Occitan’s closest relative is Catalan. Since September 2010, the Parliament of Catalonia has considered Aranese Occitan to be the officially preferred language for use in the Val d’Aran.

Across history, the terms Limousin (Lemosin), Languedocien (Lengadocian), Gascon, and later Provençal (Provençal, Provençau or Prouvençau) have been used as synonyms for the whole of Occitan; nowadays, “Provençal” is understood mainly as the Occitan dialect spoken in Provence.

So you can see how if a language based splintering were to get started, it could easily have some parts of France choosing to get cozy with their cousins and closest language neighbors.

The French spent many decades trying to eradicate local languages in favor of French, though now the EU discourages that. They’ve pretty much eradicated the Celtic Breton language on the coast. During W.W.II the Irish and Scots Gaelic speakers could ‘get along OK’ with the Breton speakers on landing. Now not so much as the Irish have forgotten their language and the Bretons have had it discouraged. But I digress…

Here’s the Occitan area of France, just over the border from Catalonia: 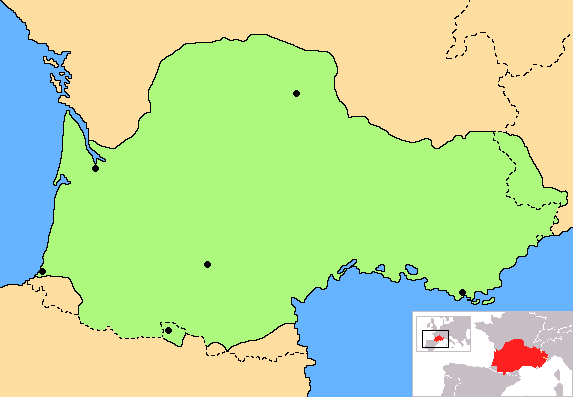 Now here’s the parts of Spain speaking Catalonian. Note they include more than the Catalonian State (or Provinces, or Districts, or whatever they call the subdivisions…)

The part where the vote is happening is only the large Provence of Barcelona (autonomous community named Catalonia) near as I can tell, but the language area included down to Valencia, and out to the Balearic Islands.

So once a separate Catalonia is declared, it is quite possible several other Provinces might want to exit Spain and join up. Thus the vigor with which Spain is fighting the one Province getting things going…

Back at the language:

Spanish has much more Arabic influence in it, both in the harder sound profile and in the various Arabic loan words. Ever wonder why French sounds so much smoother than Spanish? Several hundred years of Arabic influence.

Here’s a small part of a chart from the language Wiki showing the same word (by meaning) in different of the related languages:

It largely comes down to how much of the other substrate language in an area survived the Romans (so how many Celtic words ) and how many were borrowed from occupier or neighbor languages. See:

That actually lists the origin of many words from other languages too.

As Roman Latin overlaid prior languages, then the empire broke up and other language speakers arrived, the various areas had their polyglot tongues diverge. In many ways, the different languages of Western Europe are just various mixtures of Celtic, Latin, German, and the odd bits of Arabic in Iberia. (Honorable Mention for some Greek too). Then mixed, shaken, and slurred / blurred over time.

So given that, why does a given group feel so strongly about their particular mix of Latin / Celt / German vs their neighbors? Got me. Did Goths, Visigoths, Franks (in France) or more modern Germans bring their “have” helper verb to your language? Was it continental Celt that influenced (if French) or island Celt (if British)? Was your Latin mixed with folks from all over the Empire and simplified by their difficulties with the grammar? (Italian). That’s what makes the different Romance languages of today.

But it is what it is. Folks care about their particular variation on a theme. Celtic is dying out, but it started as Italo-Celt; and there are references saying that the Gauls of France spoke a Celtic language that was nearly mutually intelligible with Latin, so has it really died out, or is it just that the Island Celt was drifted far from most Celts?

We’ll find out soon just how much the Catalans care about their particular mix of Latin / Celt and misc. Do they accept a bit more of the harsh Arabic sound of Spanish? Will they demand to be free of it? Will the folks in Provance in France want to join them and escape French domination?

Only time will tell.

Then, should they decide to demand independence, will Spain let them be, or is a new Spanish Civil War in the wings? If so, what will the EU do? As the Kurds demand a separate Nation, how will things unravel in Turkey (as it gives up the EU dream) and Iraq and Syria as they all three fight each other and try to get the Kurds back in their pocket? With Conglomerate Nations disassembling from the UK Brexit to Catalonia to Kurdistan, what happens to the Globalist Dream? And will they take it laying down… I think not.

Personally, I don’t care if Catalonia declares freedom. Other than as entertainment via the news, it doesn’t involve me. I do have a small desire for the UK to use it as a needle to the EU (via announcing free trade with them if they separate) but I know the English are too polite to do that (despite the German / French dominated EU doing worse poking and “chain jerking” to them). From Mum I learned that British Reserve and politeness. It took me a couple of decades, but I finally learned from Dad that if someone jerks your chain, you use it to strangle them to death… fast. So I guess I’m more American now ;-) So “not my chain”, I’m just in it to watch. Popcorn anyone?

Well, with that, let the show begin.

A technical managerial sort interested in things from Stonehenge to computer science. My present "hot buttons' are the mythology of Climate Change and ancient metrology; but things change...
View all posts by E.M.Smith →
This entry was posted in Political Current Events and tagged Catalonia, Independence, Language, politics, Spain. Bookmark the permalink.