Snow In France In May 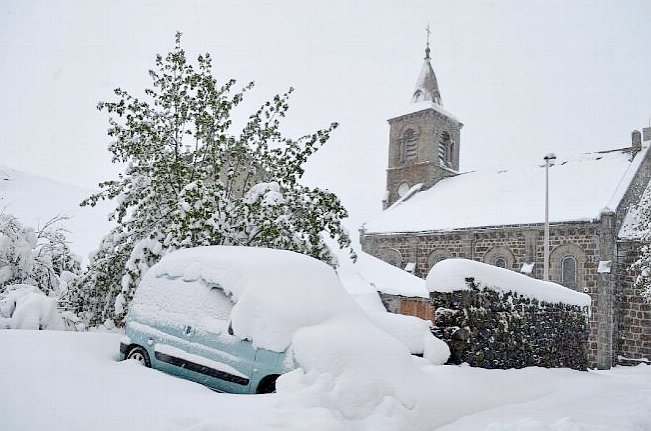 Spring might have already brought unseasonably warm weather France’s way but it seems like winter is still holding on in parts of the country, with snowfall hitting some southern areas on Sunday. Here’s a look at the spring snow in pictures.

It’s hard to believe we’re still talking about snow in the middle of May.

Nevertheless, parts of the south east have been hit by a late blast of winter with snowfall hitting the south eastern departments of Lozere and Ardeche and the south central department of Haute-Loire over the weekend and into Monday.

The three departments remained on orange alert — the second highest warning — for snow and ice on Monday morning, according to France’s national weather agency Meteo France.

Well, that’s Global Warming for you. Piling up so you have to shovel it away…

More photos at the link.

Here in “Sunny” California, I have overcast sky (for several days running now) and mornings just barely reaching 50 F ( 10 C ). The afternoons have tended to nice, reaching warm enough to run the BBQ and not needing a jacket. It’s just the nights that are still too cool.

The good news is that unlike prior years where I’ve had to run A/C sometimes even in April, this year my A/C use has been zero. It looks set to continue at zero well into June. (All of two weeks away…)

I’ve been tempted to run the heater in the mornings but have resisted. Opting for jacket and / or thermal blanket (loose knit lots of trapped air warm light blanket). I presently have one draped over me as I sit on the couch, having morning coffee, and contemplating another cold morning. But at least I don’t have to shovel snow.

“It could be worse, I could be in the South Of France”…

A technical managerial sort interested in things from Stonehenge to computer science. My present "hot buttons' are the mythology of Climate Change and ancient metrology; but things change...
View all posts by E.M.Smith →
This entry was posted in AGW and Weather News Events and tagged France, May, Snow. Bookmark the permalink.

5 Responses to Mid-May, South Of France, Thoughts Turn To … Snow?