There is a very interesting article on home grown DIY grain from a “grain garden”. It is in four parts, and covers things from planting to threshing to use in foods. The article writer lives in Alaska, so this is particularly pertinent to cold and short season areas. They tested 3 grains (rye, barley, oats) but decided rye was not productive or reliable enough. This is as expected in a very cold short season area.

To the extent we enter into a very cold cycle, that point will be very important elsewhere in the world.

Starts off with a preamble that looks at various economic trends and comes to some reasonable conclusions. Conclusions I saw as likely up until Trump (and that could return with an Obama-II or Hillary-lite in the next election cycle).

Preamble: Why We Should All Become Increasingly Self-sufficient

People’s outlook and actions are largely a product of their experiences, both real and vicarious. My wife and I have spent most of the 23 years prior to 2007 visiting much of the world via sailboat, and our observations have made a big impact on our view of the world.

Trade deficits are a reality. In Asia, more than three decades ago, we saw smart, hard-working people whose wages were a pittance by U.S. standards.
[…]
The accelerating exodus of the developed world’s major corporations left behind consumer societies that produced less goods and more debt each year to exchange for their essential needs. Earlier, I think that it was from the chairman of Sony that I first read the phrase “hollowing out of America” to summarize the process. Little imagination is required to see the end result. What do we make to exchange with China in return for their manufactured goods?

What do we make that oil-producing countries need, in exchange for oil?

Lately the answer to that question has been fighter jets, bombs, and tanks. Hardly the stuff of a vibrant growing culture or economy.

Asia now has the new factories, the jobs filled with trained workers, the technological advantage of ongoing production improvement, the education, the work ethic, and, increasingly, the wages to pay for their future demand. Much, maybe most, of the world’s “high tech” is now manufactured in Asia.
[…]

When it comes to high tech, what we design is pretty much all built in Asia. From iPhones to laptops to robots and CNC milling controllers.

Then they spend a bit of time describing a trip to Russia during the economic collapse after the USSR fell apart.

I found this little bit of “PC Run Amok” interesting, and not something I’d seen anywhere else:

For purposes of discussion, food self-sufficiency can be subdivided into protein gathering, vegetable gardening, and grain gardening. For Alaskans, protein self-sufficiency is frequently attained, or aided, via wild fish and game harvesting. (Although, this is becoming less the case, as federal and state authorities in Alaska modify existing laws to redistribute hunting and fishing rights from everybody to Natives and in effect instituting discrimination but politically correct discrimination.) Self-sufficiency efforts for us began in the summer of 2008, when we started clearing land for a large garden. Vegetable self-sufficiency (including root crops, such as potatoes, carrots, and turnips, as well as greens, such as brassicas and spinach) is fairly easy to attain, even with Alaska’s short growing season.

Wonder if that “redistribution” of hunting and fishing rights is yet another Obama thing to be redressed?

Then note the list of reliable short season cool season vegetable crops. Fairly standard, but nice to have it confirmed. Also realize that even if you live in warm and long season areas, knowing what you can start early and eat soon is very valuable information.

We wanted both vegetable and grain gardens. Becoming self-sufficient with home-grown grain faced many challenges. In the locale of my home, in southern interior Alaska, my impression, without weather data verification, is that the growing season is usually shorter than even in northern interior Alaska because the summers are cooler. We started by growing rye, hull-less oats, and the variety of hull-less barley developed by the University of Alaska. Hull-less oats and hull-less barley, after threshing, become a clean grain and hull-less, like wheat. After two years of trials, I concluded that the growing season was too short for rye to mature.

Rye is itself a cool short season grain, so having difficulty with rye says it’s about the limit of what any of us might experience outside Alaska. Oats will sprout in 33 F soil just barely above ice temperature. I didn’t know there was a hull-less barley. Nice to know two useful hull-less grains exist.

Part two looks at soil preparation, planting, reaping, and drying operations. DIY machines are described to make each step easier and more productive. I found his reaper an interesting idea. Attach a catch basket to a reciprocating hedge trimmer. The main takaway for me being that some relatively simple if creative machines can make a big difference in labor required even at the very small scale of 1/2 acre.

Grain plots may vary in size, ranging from, at the minimum, a small plot using a rototiller or shovel and rake for soil preparation, hand sowing the grain, reaping with a scythe or sickle, threshing with a flail, and winnowing with a kitchen fan or a windy day. The small-scale plot is very labor and time-intensive per unit of grain harvested, and the total quantity of grain harvested may not meet the needs of a large family. By contrast a commercial operation may utilize hundreds of acres and a heavy investment in machinery (or utilize the services of a commercial harvesting crew). What I wanted was something in-between the minimum and the commercial operation.

I was seeking a grain plot size and the necessary equipment sufficient to, with a large safety margin, produce enough grain for one or more families every year. My grain garden has been about 15,000 plus square feet (roughly ⅓ acre). Normally, this area will produce enough grain each year to provide us with several years of consumption. This mid-scale grain gardening requires more mechanical equipment than the minimum, but it provides the advantages of much larger grain production and a large reduction in physical labor and time per unit of grain harvested, as compared to the minimum. 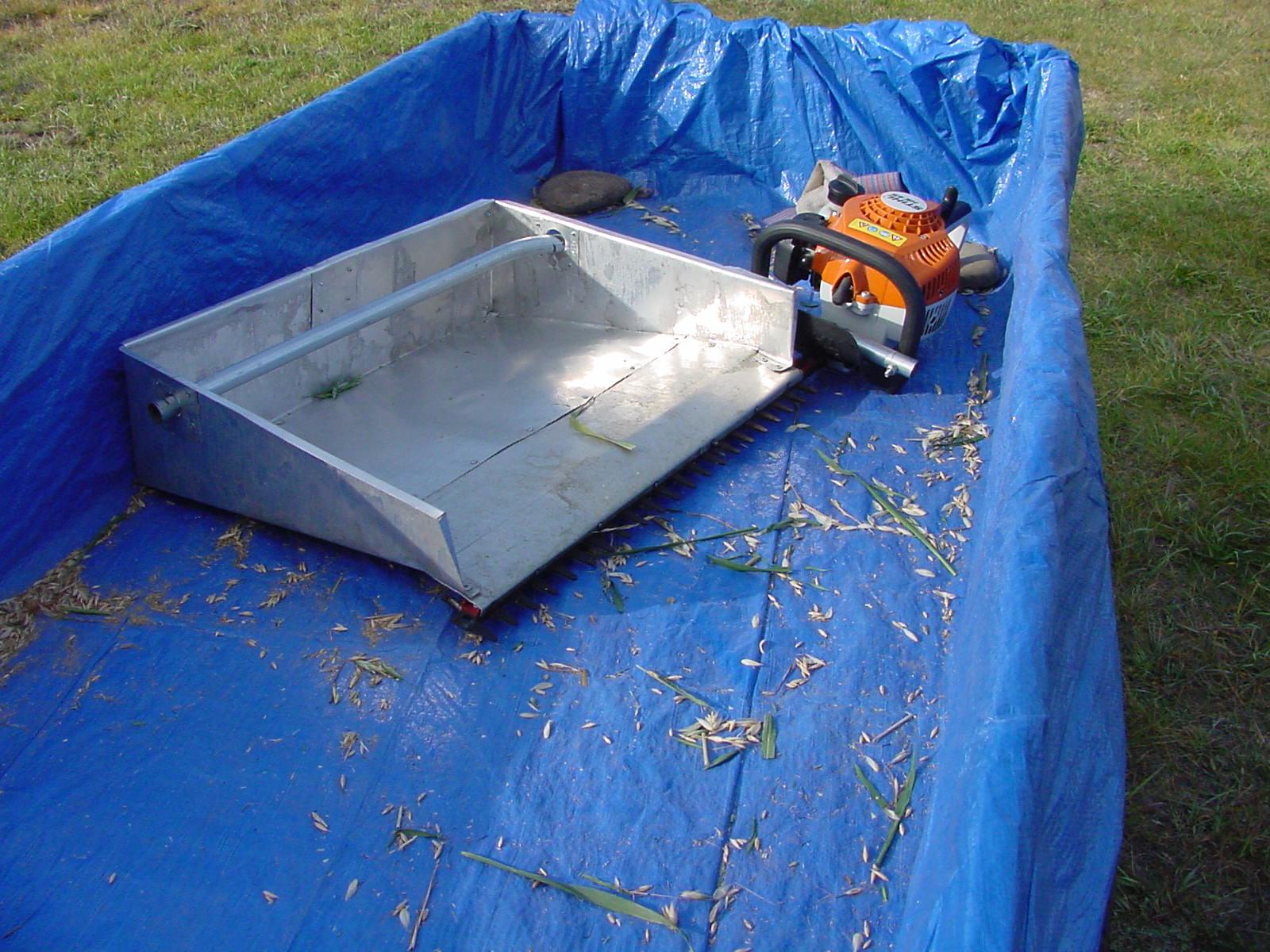 He did a test of row planted seeds vs broadcast and found broadcast worked best, but required tilling in and pressing with a roller for best germination.

In part 3 he makes a set of drying trays for use over a floor fan to dry the grain. This could be skipped in warmer dryer areas; but is a very useful thing to know about in wetter and cooler areas. Such trays could be used to dry all sorts of farm products, not just grains.

Mild fall weather during harvest time as shown in Figure 3 is unusual in the Copper River Valley, Alaska. It’s usually cold and sometimes wet; we had three inches of snow on the ground during our first harvesting year. So it is frequently necessary to dry the harvested grain before threshing. Also, peas harvested for shelling must be dried before threshing.
Constructing Drying Trash

I constructed 43 drying trays to accomplish this purpose. Construction details are shown in Figures 4 and 5. The wood is finished 1” X 2” lumber. The floors are made of galvanized ½” mesh hardware cloth. One exception is that the floor of three trays are ¼” galvanized hardware cloth; these trays serve the dual purpose of also screening grain as shown in Figure 13. All pieces are attached with screws, for strength.
[…]

Then on to specifics of making jigs and processes to speed up assembly. All well thought out. 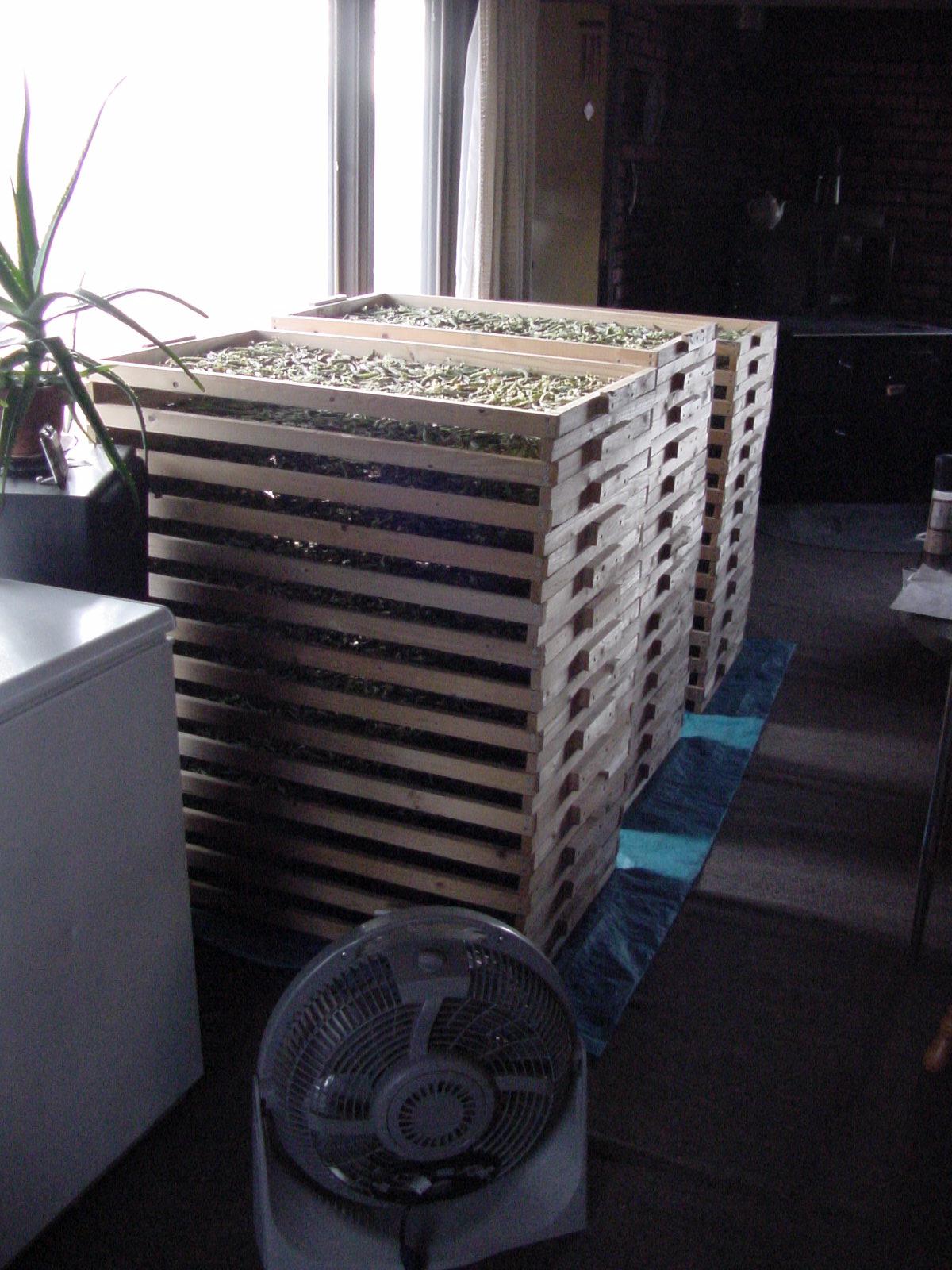 Drying trays with fan, and full of grain

I’m leaving out a lot of detail, so “hit the links” for the full article.

The author then goes on to describe a modified “Rodale thresher” giving exact description and details on how to make one: 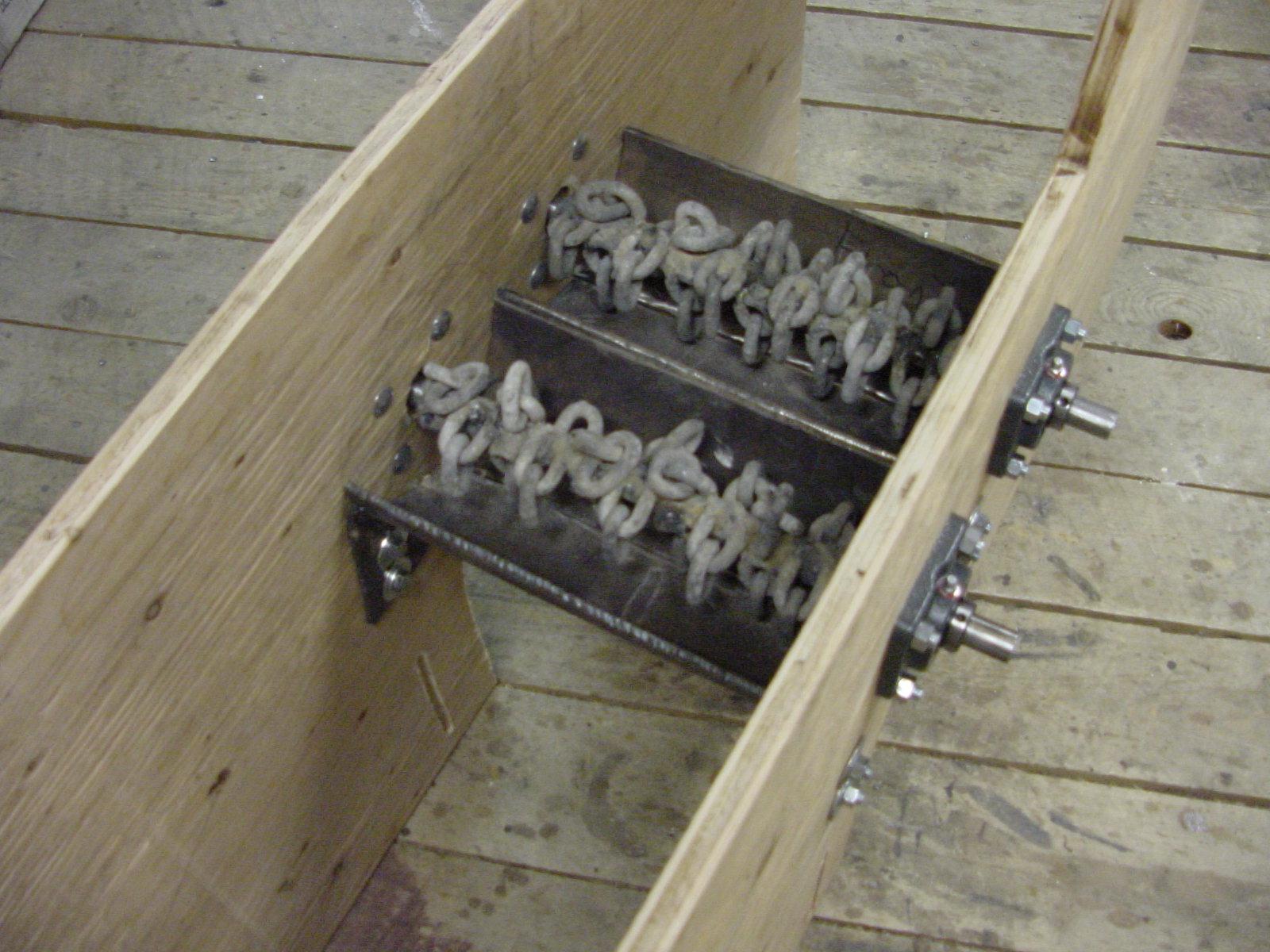 Not the kind of thing you will knock together on a weekend post apocalypse, but something very useful to have made before hand… Sure beats whacking sheathes of grain on a cement floor.

There are more photos showing it in operation and text describing a tray used to remove the grain and more details on operations. Even down to the scheduling of operations for two people during harvest time.

Part four moves on to details of threshing, winnowing, and grain cleaning. All the little details learned by observing that generally are not obvious to the person who has not done it for a year or two.

Figure 12: Winnowing oats. Note that Peri is raking out threshed oats in the top left corner of the blower. The clockwise air swirl from the fan carries oats to the center. A more professional-looking design would add eye appeal, but this works. Some oats near the wood block and under the screen will be re-winnowed. Heavier barley seeds do not have any retained sheaths, and they drop like little stones right in front of the blower. Some oat seeds retain their hulls and oats vary more in size; winnowing results in a continuum of large seeds grading into smaller seeds and seeds with sheaths and grading into non-seed debris, with increasing distance from the fan. You must make a judgment about where, in this continuum, to draw the line for “keepers”.

Then on to some ideas for cooking:

So, What To Do With All This Grain?

Since our grain supply for family use is practically unlimited and largely pre-paid with our prior purchase and construction of needed equipment, use of home-grown grain for food is without economic limit.

For bread, we grind our own barley flour and wheat flour and dilute the wheat with barley and rolled oats in varying proportions, along with other ingredients, depending on my wife’s current recipe. Neither barley nor oats have much or any gluten and therefore will not make bread when used alone. This combination of wheat and barley flour makes excellent bread. We’ve made barley-only bread with baking powder, and it has the texture of corn bread along with what my wife says is a bland flavor. It’s okay with me, but it won’t make sandwiches.

My wife has recently begun to experiment with a barley tortilla composed of barley flour (no wheat flour), sesame seeds, salt, water, and that’s all. Formed on a tortilla press and cooked on a griddle, it remains flexible and tough enough to serve as a sandwich wrapper; and we like it. I think that our barley consumption will climb, because our noon meals are based on a sandwich with side dishes.
Other Users

We also use the barley grain to supplement store-bought rice. It is especially good cooked with brown rice in a 50% brown rice and 50% barley ratio. It is actually quite good by itself with butter and salt and pepper. And, of course, it’s great in stews and soups. All of this comes from my wife.

I find the whole series interesting not just for the “how to” information, but for the flow of the “lessons learned” and the details that are observed. Using cheap box fans instead of waiting for a windy day. Making drying trays to get around dank Alaska fall weather. Barley tortillas as an alternative to wheat gluten bread.

Overall, a story of how to make the world work for you, while adapting to the world where it refuses. Just that attitude needed to make a go of life in a self sufficient way in a less than perfect place or time.

A technical managerial sort interested in things from Stonehenge to computer science. My present "hot buttons' are the mythology of Climate Change and ancient metrology; but things change...
View all posts by E.M.Smith →
This entry was posted in Emergency Preparation and Risks, Uncategorized, World Economics and tagged Alaska, Barley, Grain, Oats, Preparadness, Rye. Bookmark the permalink.