Not offering a lot of information here, just admiring the problem. I’ll add some station information a bit later (for where we have stations recording the temperature).

THE big problem can be summed up in one map. Folks almost never look at the globe this way, yet it is vitally important to do so. We like to look at maps with all the land on them where all the people live (and all their thermometers are located…) yet the reality is that 1/2 of the world is essentially devoid of thermometers. Here’s a Southern Ocean view of the world: 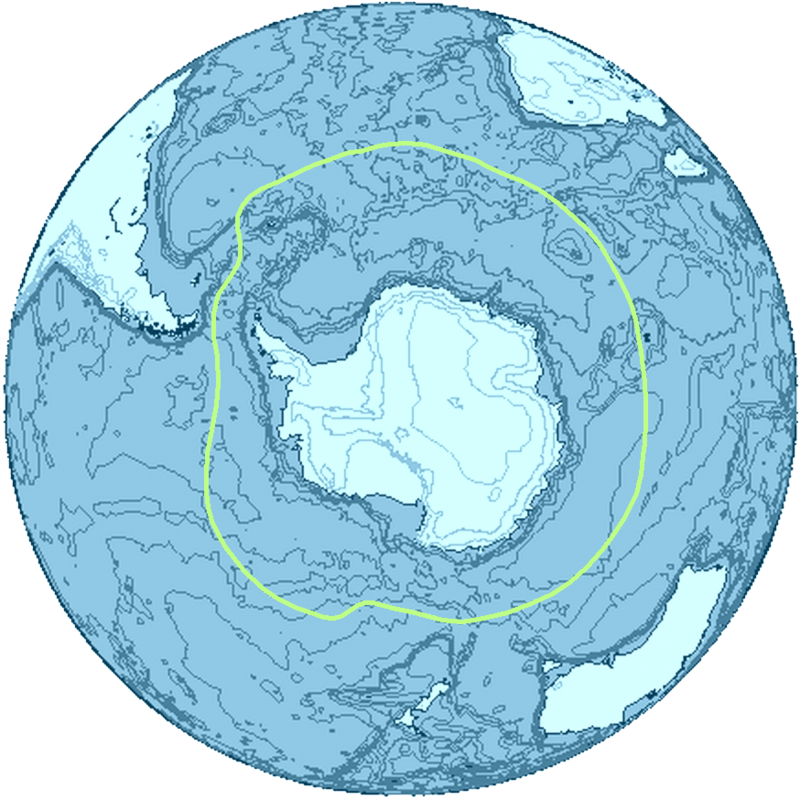 The Southern Ocean around Antarctica

Here you can clearly see the basic problem. There’s nearly nothing in the “temperate” band around the southern hemisphere of the globe.

Your choices are Antarctic research stations, that were very poorly represented until fairly recent history, and even that is not very great; and some bits of South Africa and Patagonia. Both fairly wild even in the 1800s, and with political instability even now. Then Australia, that is still mostly empty in the Out-Back (I’ve driven into it. Did not see another car for hours, then days…).

Then note that even Australia and South Africa are closer to the Equator than the Pole.

There are some ship data in the GHCN, but not a lot; especially not in the early years. Then there’s that whole “bucket vs plumbing” measurement issue, and the question of just how deep the water was measured. Surface temperature and 20 feet down are quite different, and with ships having screws dozens of feet tall, there’s a lot of mixing in some shipping lanes. So just what was measured, eh? The data are more “correction” and “adjustment” than actual data.

I’m going to count up the stations by latitude and see what the count is, but it isn’t many. Some New Zealand, a bit of Australia, some Patagonia (when they were not having wars and revolutions), and a few stranded research stations in Antarctica.

Season that with knowing there IS a “Polar See-Saw”:

The polar see-saw (also: Bipolar seesaw) is the phenomenon that temperature changes in the northern and southern hemispheres may be out of phase. The hypothesis states that large changes, for example when the glaciers are intensely growing or depleting, in the formation of ocean bottom water in both poles take a long time to exert their effect in the other hemisphere. Estimates of the period of delay vary, one typical estimate is 1500 years. This is usually studied in the context of ice-cores taken from Antarctica and Greenland.

So what looks like a “trend” in one hemisphere may in fact just be “counter phase” to the other where you have no suitable data.

So what do you do when there just isn’t any data to make a decent baseline and you don’t know the phase of the polar see-saw?

A technical managerial sort interested in things from Stonehenge to computer science. My present "hot buttons' are the mythology of Climate Change and ancient metrology; but things change...
View all posts by E.M.Smith →
This entry was posted in AGW Science and Background and tagged Antarctic, Hemisphere, Ocean, Southern. Bookmark the permalink.