In a prior posting I made a nice area proportional global map of stations in current use (then 2015) vs those in the Baseline (more or less as GISS uses it). The only problem is that it is hard to see just what stations come and go in any given continent / country. Then, in another posting, I made “scatter graphs” of all the temperatures by region, but that still doesn’t tell you what came from where. (I’m working on a way to make the baseline vs current more visible but so far have an incompatibility block on Python where I can either get to the database OR have the statistics and color facilities I want from Python 3.x)

So for now I’ve made “Now” (the 2015 most current data in GHCN v3.3) vs Baseline maps for each “Region” (roughly continent) with the exception of Ships At Sea (since there are none currently in use). This, at least, lets you look at each Region and see just what is being measured and what it is being compared to.

So, with that, I’m just going to paste the maps in without much comment. Do note that I “cut off” a half dozen stations at the far end of Russia on the Asia region since they ran over into “the other side of the globe” and I’d need to have the whole globe shown again, at least on the E/W axis. For Region 5, Australia / Pacific, the same problem arises but with a lot more stations. So for them there is a Region 5.1 map and a Region 5.2 map. One for the positive longitudes and one for the negative.

Each map has variable scale. I make no attempt to keep things area proportional nor dimensionally accurate. (Well, for Region 5.2 I did, keeping a 2:1 ratio of Long:Lat as a bunch of islands doesn’t have an outline you can recognize). The goal was separation of the dots, not natural proportions.

These are “Now over Baseline” with transparency in the “Now” that are red. This means overlapping dots ought to turn purple in color. There are some of those in high density places, but much better separation than in the global view. 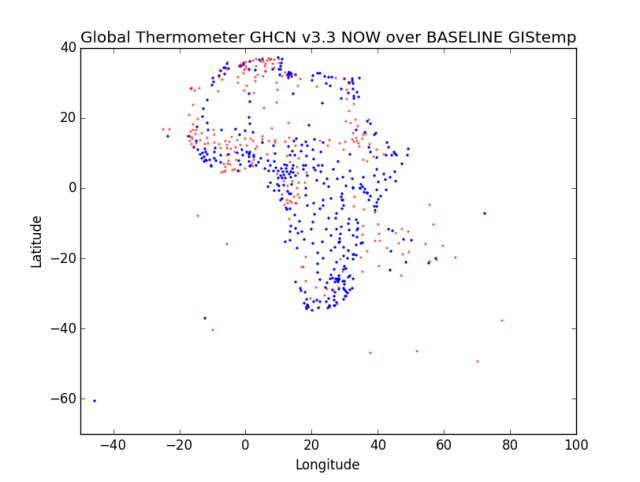 It looks like the blue thermometers are abandoning the stable Tropical and Temperate areas and migrating to the rim of The Sahara… I’d put a smiley on that as it is intended as a humorous metaphor, except that it does look like that as a source of bias. Those blue areas will have “temperatures” fabricated from the red areas via the Reference Station Method, then compared to make the “anomalies” that are used to scare the children with Global Warming Boogeymen.

Russia & India always very sparse. China got a good thinning out. (I wonder if the ones kept are in major growing industrial centers…) Then Japan and South Korea, even in close up, are mostly blue. What’s that all about? Zooming in for a closeup:

It does look rather like abandoning the interior while keeping coastal sites. Interior South Korea can be darned cold. I wonder how high the mountains are there? Japan has a row of mountains down the spine, but it does look like some red dots survive there. Enough? Who knows.

Brazil very under sampled. The Spanish Language coastal areas over sampled. Erosion at the tip of Patagonia.

What can I say? Canada and Alaska a mess. Mexico looks like most of it is gone. Ditto Central America and a bunch of the Caribbean. Looks like the Texas Panhandle got dropped, but lots of data from the Bos-Wash corridor and down into Appalachia. California looks like the mountains get tossed out along with down near San Diego, while some coastal areas are kept. 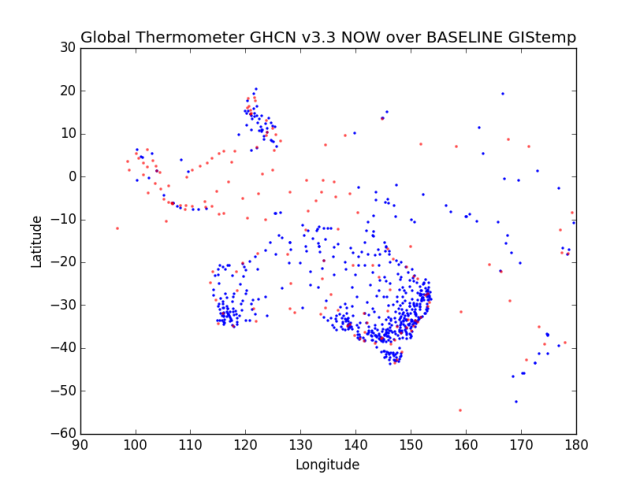 Looks like a lot was dropped in what the Australians like to call mountains ;-) (Hey, Sierra Nevada and Rockies guys… Real Mountains ™ ;-) then also New Zealand looks to have dropped mountain stations and kept coastal. I think that’s a pattern… GHCN seems to regularly keep high cold places in the baseline and coastal mild stations in the “now”. Can you really compare the tops of the New Zealand Alps with the sunny beaches? Even with anomaly Reference Station Fabrication? AND have 1/10 C accuracy?

Didn’t know exactly what to call this chunk. Polynesia covers too much. South Pacific is a bit vague. I chose “Americas” as it is closer to the Americas than to Asia, just to make it clear what side of the Pacific it is on. ( I know I could use East / West but they change depending on where the viewer stands…) It would be interesting to get current data for the islands that were dropped (blue) and see if they don’t show any warming…

It looks like they are comparing Portugal to Spain and Poland to Germany, given when there are Baseline vs Now stations. Then Turkey and the Austro-Hungrians get a good thinning out. Ireland runs to the coast, while the UK gets the blues. 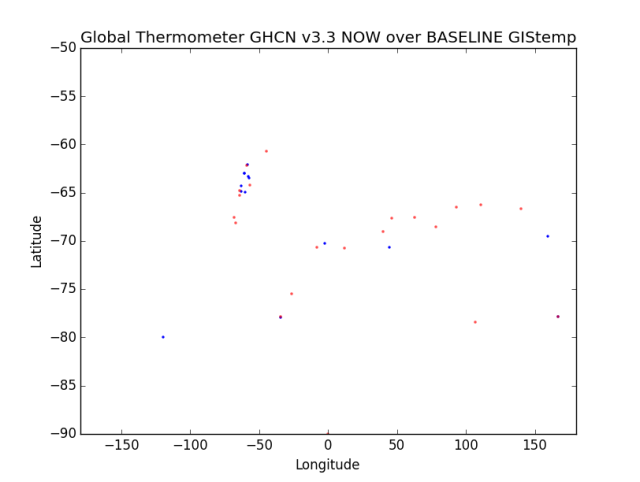 You can sort of make out the Peninsula and the perimeter of Antarctica. Not a lot of deep inland data.

I’m not going to include all the code. It is basically that prior global map with Lat vs Long plotted, but with the area displayed adjusted and a regional filter in the sql statement. Here’s the bits that matter:

Note I’m not plotting the cosine latitude, just regular latitude. Then you plug in a region number on the filter and adjust the dimensions of the graph displayed:

IMHO, any thermometer not in the present needs to be removed from the comparison “Baseline”. It is no longer a real instrument.

A technical managerial sort interested in things from Stonehenge to computer science. My present "hot buttons' are the mythology of Climate Change and ancient metrology; but things change...
View all posts by E.M.Smith →
This entry was posted in AGW Science and Background, NCDC - GHCN Issues and tagged Antarctica, GHCN. Bookmark the permalink.