These are not as fine grained as I’d like. It would be best as an animation with each decade adding or removing the thermometers; but my skill is not ready for animation yet.

So here’s just a few graphs showing how the thermometers start in Europe and spread over the globe. It’s mostly by about 1/2 Century steps, but not uniform. The first graph is anything before 1800 and the last is just the 15 years from 2000 to 2015. 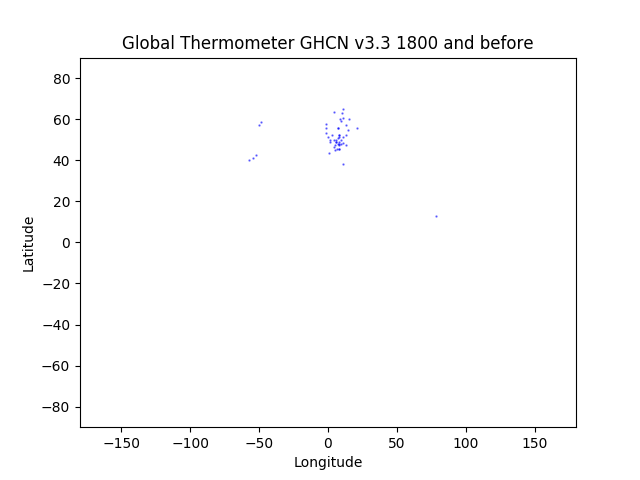 The data prior to 1900 are too thin to be usable for saying anything about the globe.

Between 1900 and 2000 we get decent global coverage but with exceptional bias toward the USA and Europe with industrializing Asia coming on stream. We known nearly nothing about the 3/4 of the planet that is the oceans and that contain the bulk of all surface heat.

After 2000, the thermometer inventory depletes and we are left with too thin a coverage for most of the planet, and in places and ways that are not comparable to the past. We can’t really compare this set of instruments to those different historical sets and really say much of anything about “global change”. We can say a lot about “instrument change”…

A technical managerial sort interested in things from Stonehenge to computer science. My present "hot buttons' are the mythology of Climate Change and ancient metrology; but things change...
View all posts by E.M.Smith →
This entry was posted in NCDC - GHCN Issues and tagged history, thermometers, Time. Bookmark the permalink.

19 Responses to Thermometers Over Time