https://chiefio.wordpress.com/2019/02/27/w-o-o-d-27-february-2018/
and remains open for threads running there (at least until the ‘several month’ auto-close of comments on stale threads).

Venezuela is at the one week point of no electricity. Good lessons in what happens during the chaos of collapse. Folks are now (per Sky News) opening pipes underground (in access holes) to drain what water is stuck in the pipes. Getting buckets of dirty water from concrete lined “rivers” (or drain ditches) in downtown. The ability to export oil has collapsed without any electricity to make it go.

No food. No water. No lights. No communications. No money. No medical care. Yet so far the people are being fairly civil. Eventually this will change…

Brexit: With all of 16 days left, the Parliament has voted to toss T.Mays “deal” yet again, but also voted NOT to leave with “No Deal” (i.e. under the same WTO Rules that work just fine for the rest of the world…). Project Fear is clearly winning with folks calling it “Crashing Out” and “Disaster”. Nobody mentioning that you lose the EU and it’s crazy rules and GAIN North America, The Commomwealth, and much of Asia / Africa / South America. Sigh.

At this point, the best the UK can hope for is that the EU throws them out. It takes all 27 other EU members to vote yes to keep the UK in. Only one is need to pitch the UK out.

The Storm A big storm is rolling over the USA from The Gulf to Canada: 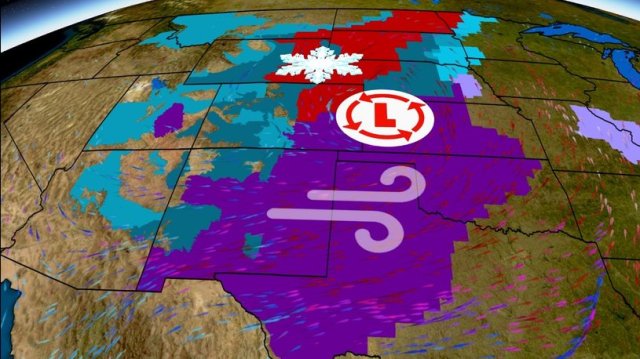 WINTER STORM CENTRAL
Winter Storm Ulmer Intensifying Into a Major Plains Blizzard With Heavy Snow and High Winds
By weather.com meteorologists less than an hour ago.

Ulmer is intensifying in the Plains where it will produce heavy snow and high winds into Thursday.

Blizzard warnings have been issued from northeast Colorado to North Dakota and northwest Minnesota.

Travel conditions will be nearly impossible due to the combination of heavy snow and high winds.

RUSSIA!!!! At Last, Pelosi realizes that the Russia Dog don’t hunt and that whipping it to death makes them look Stooopid. Then the Old Line Corrupt Dims have the New Fresh Idiot Dims chewing them up with the likes of Occasional Cortex both a breath of fresh air AND a laughing stock. Best to tend to their own house for a while.

I know that given a choice between looking at her and listening to her “crazy talk” about RUSSIA!!! or looking at A.O.C. while listening to HER “crazy green talk”, well, I’ll take the one that makes me laugh and doesn’t look like a resurrection a few days too late.

Boeing is trying to decide if their Max airplane is safe, or crashes on a one-a-month schedule with only 70-something flying. Hey, that’s only 1/70 crashing odds per month… Or maybe the pilots can’t handle arguing with some new automation setting that’s “helping” them into the ground (as was discovered to be the issue with the automatic stall recovery on another airliner where, on take off, it nosed over into the ground when the sensor tube plugged up and it “thought” it was in a stall).

Nobody knows, though they are grounding the fleet right and left anyway.